Along with the great on-going titles you've loved for months like Alters, Reborn, The Doorman, Black Panther, Wonder Woman, Black Hammer, and Mother Panic, comes some new titles just getting off the ground. From its smash debut, Heathen from Vault Comics returns with issue two as well as a spanking brand new #1 title in Powerless. Just in time for its Netflix debut, Iron Fist #1 drops from Marvel. Helena Crash #1 from Fabian Rangel, Warwick Johnson-Cadwell, and IDW is out this week. Don't forget about Loose Ends, Descender, The Spirit, Circuit Breaker and more! Happy reading! 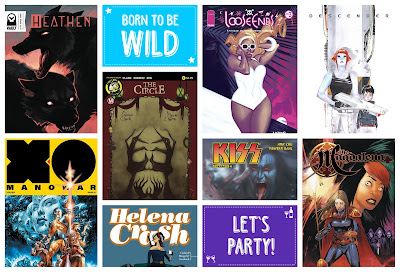 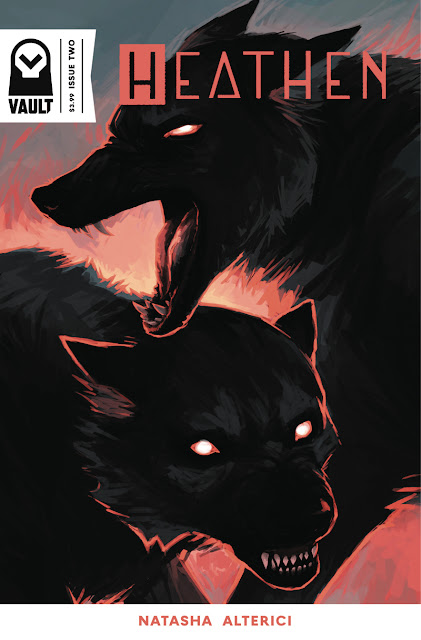 (W) Natasha Alterici (A) Natasha Alterici (CA) Tess Fowler
The viking warrior Aydis crosses hellfire to reach the Valkyrie Brynhild, only to discover that was the easy part. Actually setting Brynhild free from Odin's curse is a whole other story. Meanwhile her talking horse Saga confronts the mystical wolves who will end the world. 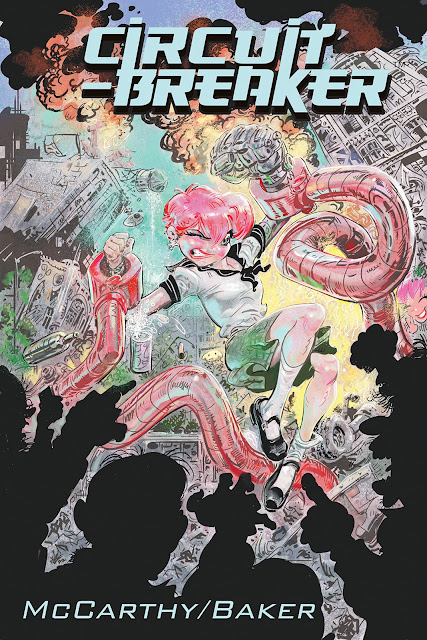 (W) Kevin McCarthy (A/CA) Kyle Baker
Armed with a new, uh, arm, Chiren does battle with her most fearsome opponent yet: an otaku vending machine that dispenses death. 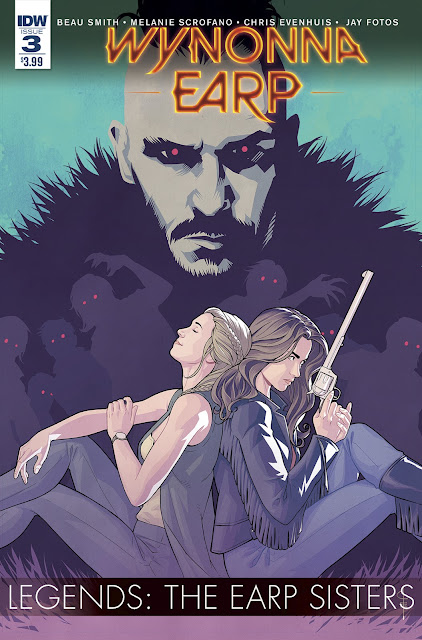 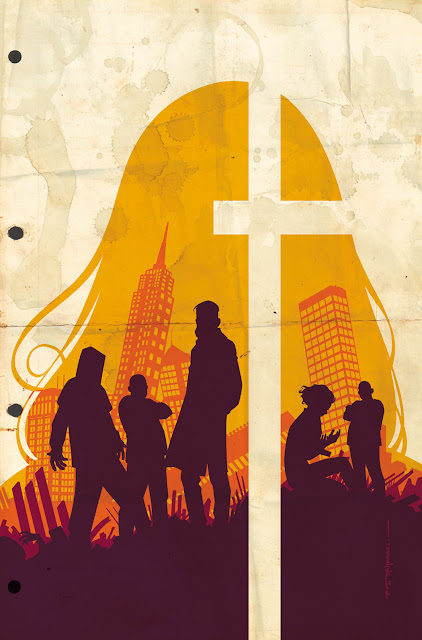 ALTERS
Trapped and outnumbered, Chalice has a final showdown with the dreaded Fascist, Matter Man, and his band of domestic terrorists.  The entire Eastern seaboard may be at risk, and there seems no way to stop this madman. A new secret threatens to tip the scales - Chalice's plan may be the craziest gambit of all time but it may just work. And the entire thing rests on the shoulders of a young woman who is only just beginning to come to terms with her brand new powers.
From the writer of WOLVERINE: ORIGIN, SENTRY, and HELLBLAZER. 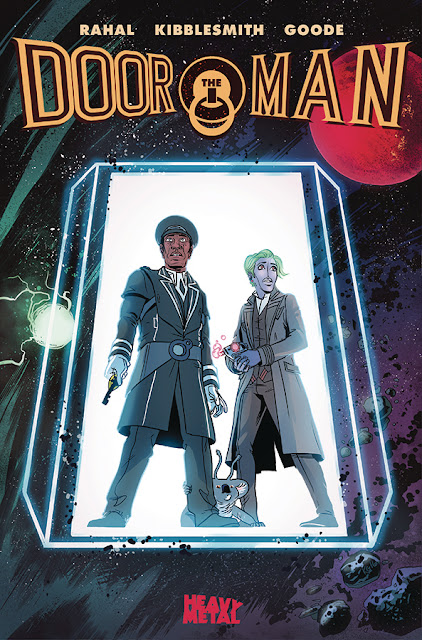 (W) Eliot Rahal, Daniel Kibblesmith (A/CA) Kendall Goode
On every planet there is a door that can take you anywhere in the galaxy. Henry Clay Waters is the Doorman for Earth - and he's one day from retirement. So why is he suddenly the target of Intergalactic assassins? Can spunky alien cop, Detective Flower, keep him alive long enough to find out? It's a cosmic comic caper full of space Koalas, monsters, exploding heads, and egomaniacal extraterrestrial gazillionaires, as two working-class heroes try to save The Universe in The Doorman! Reprints The Doorman #1-4, and includes 14 pages of bonus material! 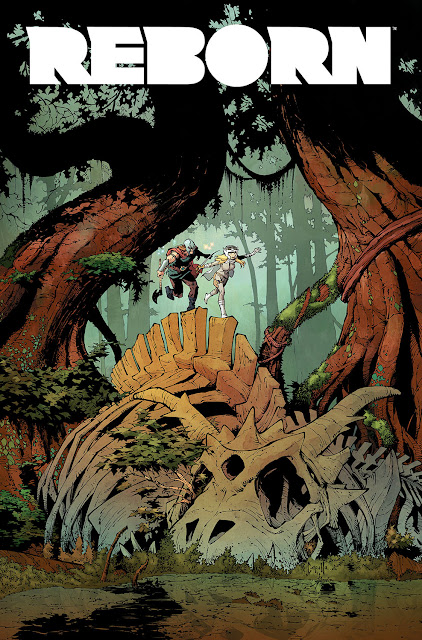 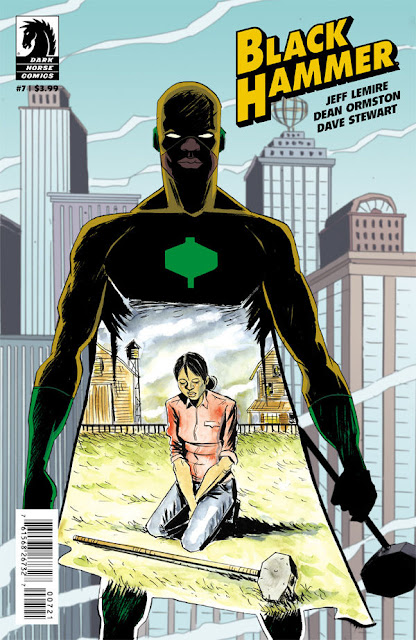 (W) Jeff Lemire (A) Dean Ormston (CA) Jeff Lemire
Joe Weber: the Black Hammer. A hero from the Spiral Slums. A husband. A father. Gone without a trace. A visitor from the outside world arrives on the farm, looking for the Black Hammer and bringing news of Spiral City to its Golden Age heroes. Her arrival stirs up old memories and awakens new hope in the marooned heroes. 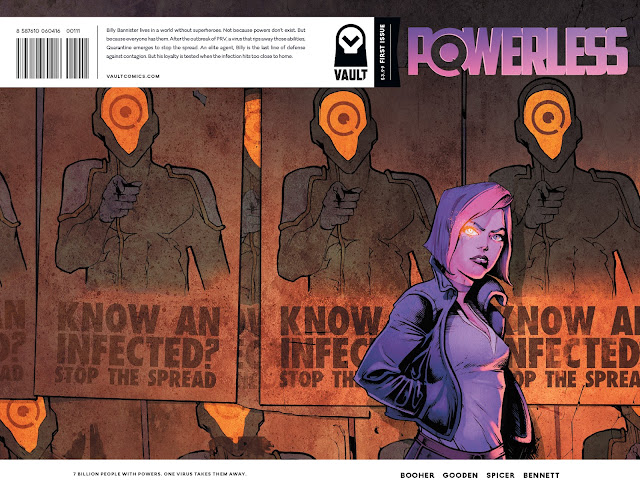 (W) David M. Booher (A/CA) Nathan Gooden, Mike Spicer
Billy Bannister lives in a world without superheroes. Not because powers don't exist. But because everyone has them. After the outbreak of PRV, a virus that rips away those abilities, Quarantine emerges to stop the spread. An elite agent, Billy is the last line of defense against contagion. But his loyalty is tested when the infection hits too close to home. 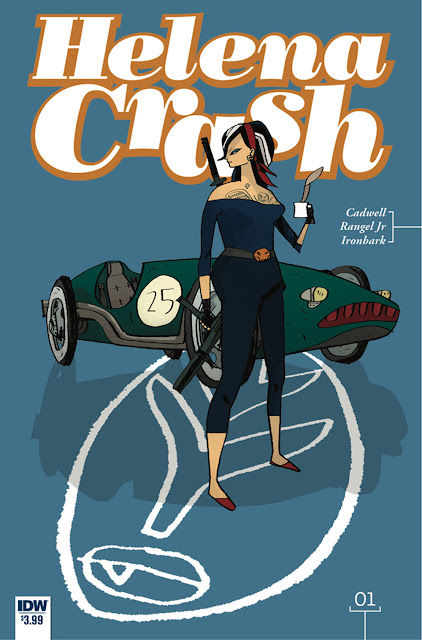 (W) Fabian Rangel (A) Warwick Johnson-Cadwell (CA) Warwick Johnson-Caldwell
From writer Fabian Rangel Jr (Space Riders) and artist Warwick Johnson-Cadwell (Tank Girl) comes a new pulse pounding, caffeine fueled, sword swinging, machine-gun firing, car crashing sci-fi adventure comic! In a future where coffee is illegal, Helena is a courier, delivering black market goods to anyone who can afford her services. When Rojo, a ruthless crime boss, asks her to assassinate his rival, the alien mobster known as White Demon, Helena finds herself in the middle of a gang war! To survive, Helena must use all of her skills, and seek help from her friends to stay ahead of her enemies! 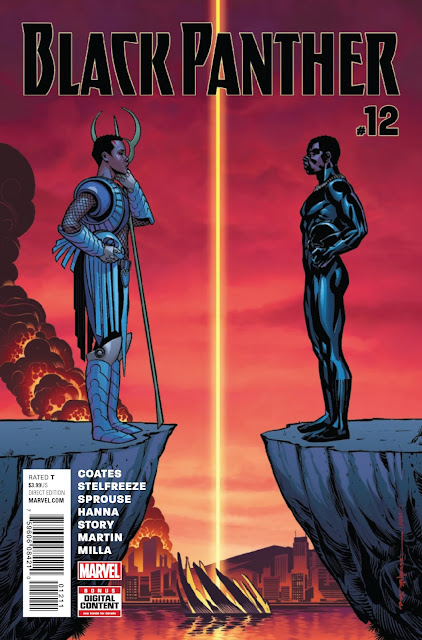 (W) Ta-Nehisi Coates (A/CA) Brian Stelfreeze
A NATION UNDER OUR FEET: EPILOGUE
•  The dust settles, and peace comes to Wakanda once again.
•  That is, if her political leaders can come to terms....
•  T'Challa finds himself in the last place he ever expected: A republic.
Rated T 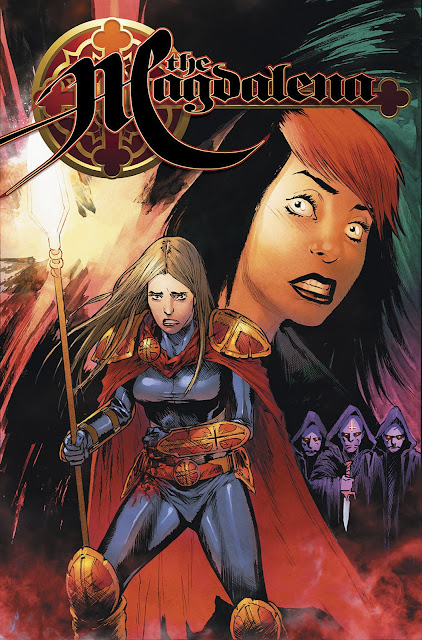 (W) Tini Howard, Ryan Cady (A/CA) Christian Dibari
SERIES PREMIERE! The Magdalena has always defended the world from demonic evil, empowered by the blood of Jesus Christ and Mary Magdalene in her veins. But when a brush with death leaves her gravely wounded, Patience decides to seek out the next in the bloodline and train her replacement. The replacement, meanwhile, is having enough trouble with finding her purpose even without the whole holy-warrior gig. 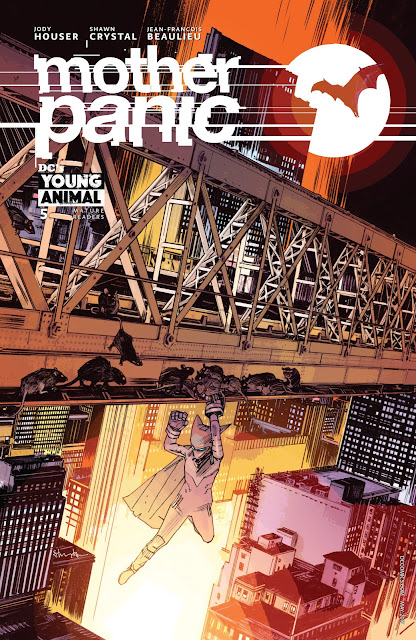 (W) Jody Houser (A) Shawn Crystal (CA) Tommy Lee Edwards
While hunting a new target, Mother Panic may have found her first ally in the strange and enigmatic Pretty. But nothing involving Gather House is ever what it appears to be. Can Pretty really be trusted? And what exactly is going on in Violet Paige's basement? 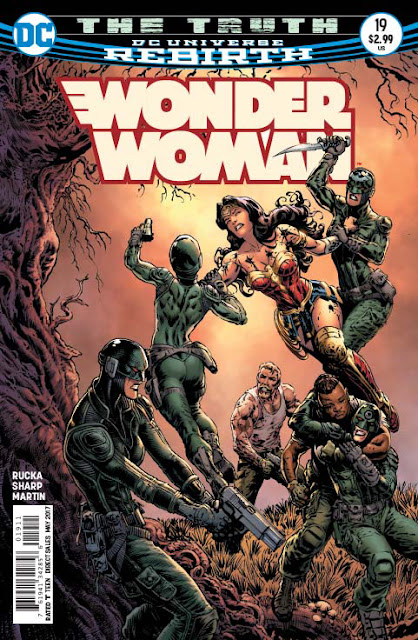 (W) Greg Rucka (A/CA) Liam Sharp
"The Truth" part three! Diana, Steve and Etta come face-to-face with their newest foes - the deadly group known as Poison! But what do they have to do with the plot to unravel Wonder Woman's life? 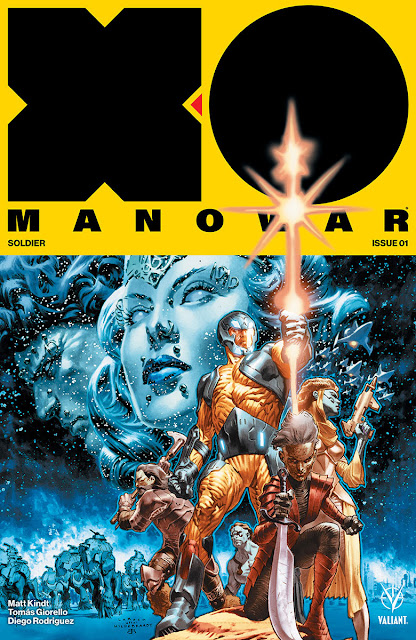 (W) Matt Kindt (A) Tomas Giorello (CA) Lewis LaRosa
Born under the oppressive thumb of the Roman Empire, Aric of Dacia learned warfare at an early age.
It was amid such violence that he was abducted by an alien race. Forced into slavery, he survived where others perished. His escape would come from bonding with a weapon of immeasurable power: the X-O Manowar armor. With it, he returned to Earth...only to find himself stranded in the modern day.
But that was a lifetime ago. Now, far from home on a strange and primitive new world, Aric has begun a new life. Liberated from his past, he tends to his crops. Free from war. Free from violence. Free from the armor.
But the machinery of death marches his way once again. Conscripted into an alien army and thrown into an unforgiving conflict, the fury inside him finds voice as he is forced to embrace the armor once more. With it, he will decimate armies, topple empires and incite interplanetary warfare as he rises from SOLDIER to GENERAL to EMPEROR to VISIGOTH. They wanted a weapon. He will give them war! 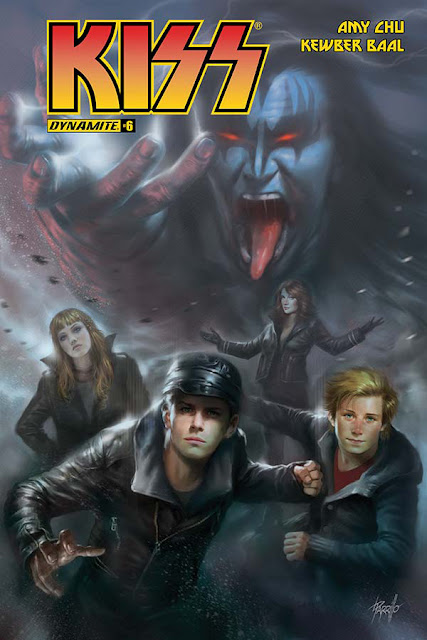 (W) Amy Chu (A) Kewber Baal (CA) Lucio Parillo
Blackwell's big secret is out. The twins discover what it means to be heroes. But are they too late to save the world they know? 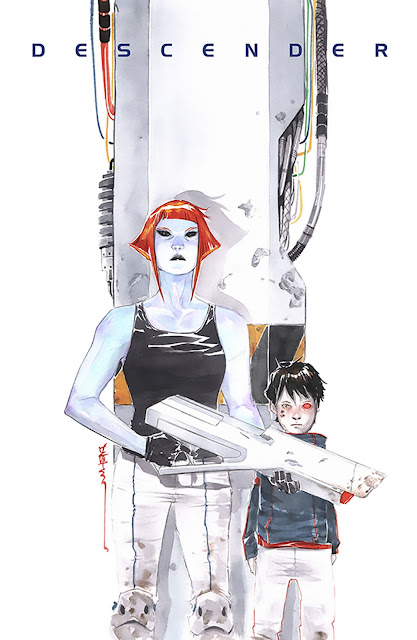 (W) Jeff Lemire (A/CA) Dustin Nguyen
"ORBITAL MECHANICS," Part Four-The fate of Driller is revealed as he crashes on a dangerous new planet and comes face-to-face with something no one else in the DESCENDER universe has yet encountered... MAGIC! And Bandit makes a startling new discovery about the Tim-22 that will send shockwaves through the galaxy! 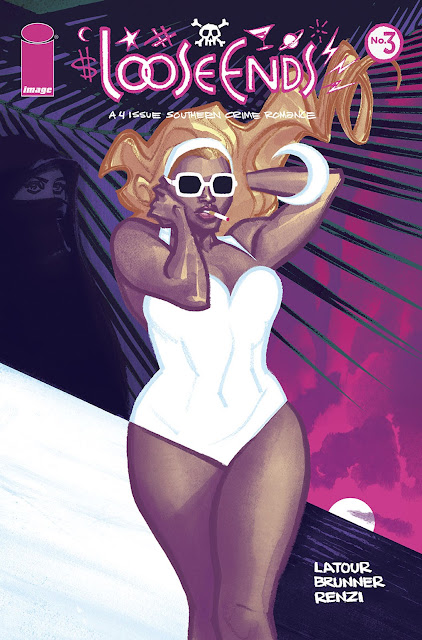 (W) Jason Latour (A/CA) Chris Brunner
Welcome to Miami, Sonny and Cheri. Here you'll find it all-gorgeous people, beautiful weather, and the decadent life you so richly deserve. Wash the blood from your hands in our crystal-blue waters, and party like there is no tomorrow. Because if the men waiting in the shadows have their way, there might not be one... 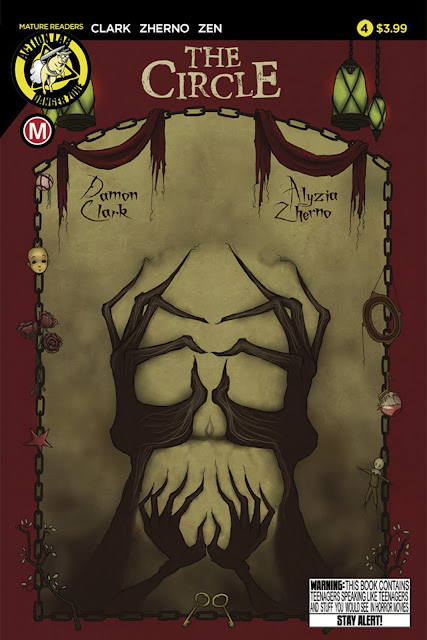 (W) Damon Clark (A/CA) Alyzia Zherno
Christian has to kill his friends to break the curse, but when his friends strike first will Christian be ready for them? There will be death in this issue, and the Circle will get smaller. 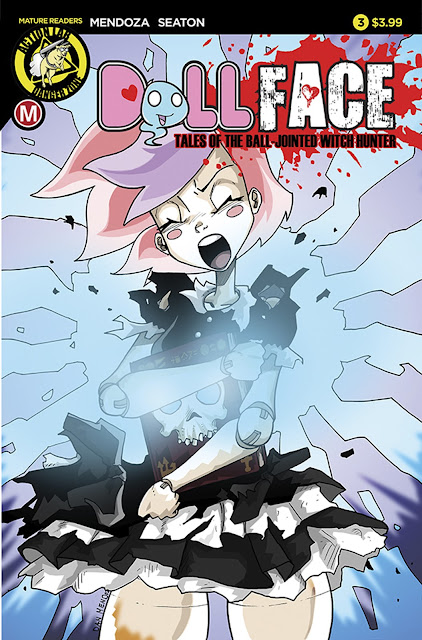 (W) Dan Mendoza, Bryan Seaton (A/CA) Dan Mendoza
DollFace and company finally arrived to their destination of the mystical necronomicon book. But will Zombie Tramp hand it over without a fight? 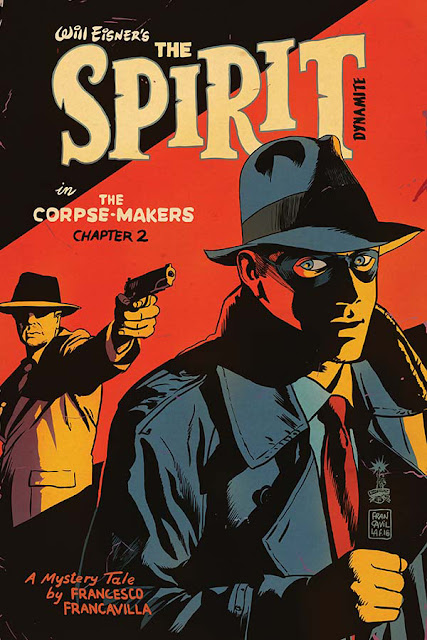 (W) Francesco Francavilla (A/CA) Francesco Francavilla
It started like a very ordinary investigative case for the Spirit, but just when he seemed to have it all figured out, the tale took an unexpected turn to reveal a larger criminal plan at work. Will Danny Colt find a way out or will this end up with a BANG?

Eisner winner Francesco Francavilla continues building a web of intrigue around our hero in this chilling second chapter. 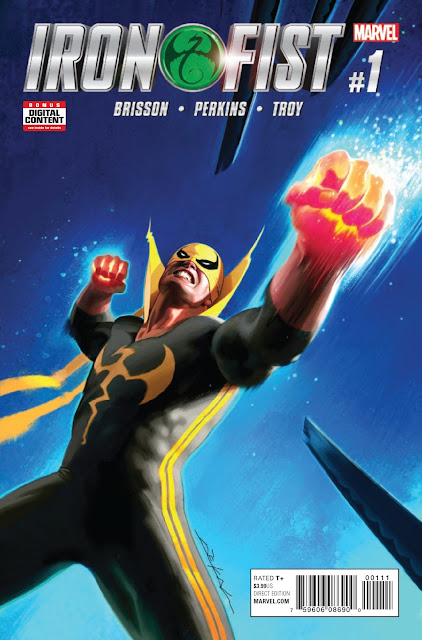 (W) Ed Brisson (A) Mike Perkins (CA) Jeff Dekal
THE GAUNTLET STARTS HERE!
K'un Lun is in ruins. The chi fueling Danny's fists is wavering. Is there a future for the Iron Fist? Danny Rand pushes himself to the breaking point, finding fights to prove his worth. But a bigger fight than he can handle may have found him...
Rated T+