It's the next best day of the week behind payday, it's New Comic Book Day! So many great books we could only fit 21 of them in this week's recommendations. We've got almost all of Image Comics' offerings on the list. What's new? The Sovereigns #1 by Ray Fawkes, Kyle Higgins, Johnny Desjardins, and Jorge Fornes. Generation X #1 by Christina Strain and Amilcar Pinna. Luke Cage #1 by David Walker and Nelson Blake. Mark Waid does double writing duty for Archie Comics - Archie #20 and Jughead #15. And check out all the other great ongoing books like God Country, Secret Empire, The Flash, Batman, 4 Kids Walk Into a Bank, Eclipse, Horizon, Ninjak, and so much more! Happy reading! 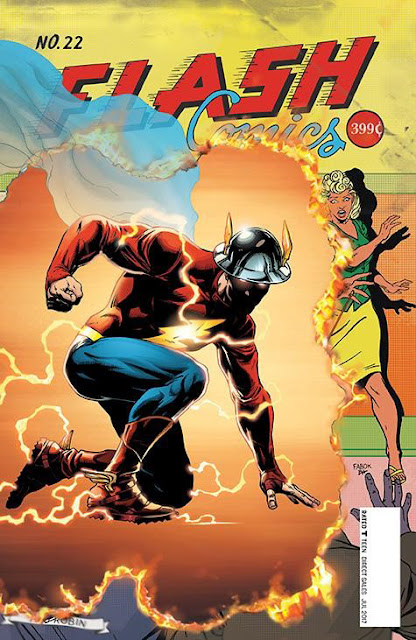 (W) Joshua Williamson (A) Neil Googe (CA) Jason Fabok
"THE BUTTON" part four! The cataclysmic events of DC UNIVERSE: REBIRTH #1 continue here! The Dark Knight and The Fastest Man Alive, the two greatest detectives on any world, unite to explore the mystery behind a certain blood-stained smiley button embedded in the Batcave wall. What starts as a simple investigation turns deadly when the secrets of the button prove irresistible to an unwelcome third party-and it's not who anyone suspects! It's a mystery woven through time, and the ticking clock starts here! 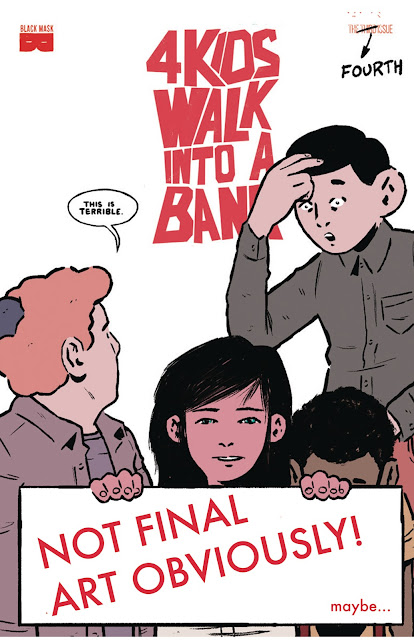 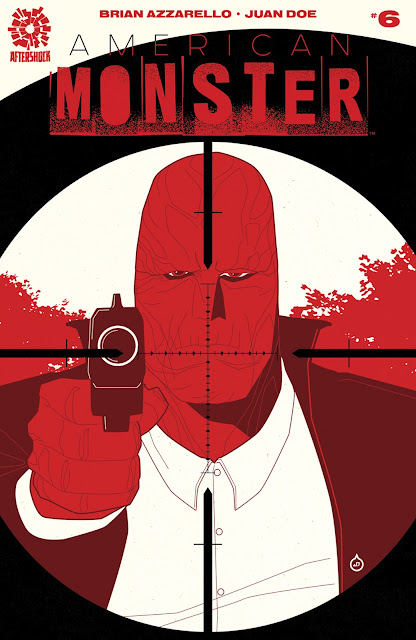 (W) Brian Azzarello (A/CA) Juan Doe
VOLUME 2 BEGINS HERE! The small town that Mont now calls home is about to boil over in a flurry of blood, bile and bullets. Just the way he likes it. Fasten your seat belts for the beginning of the second volume of AMERICAN MONSTER, with even higher doses of violence, bloodshed, sex, and mayhem! From 100 BULLETS creator and BATMAN: DARK KNIGHT III writer Brian Azzarello and Juan Doe, the artist of WOLVERINES and JOKER'S ASYLUM: SCARECROW. 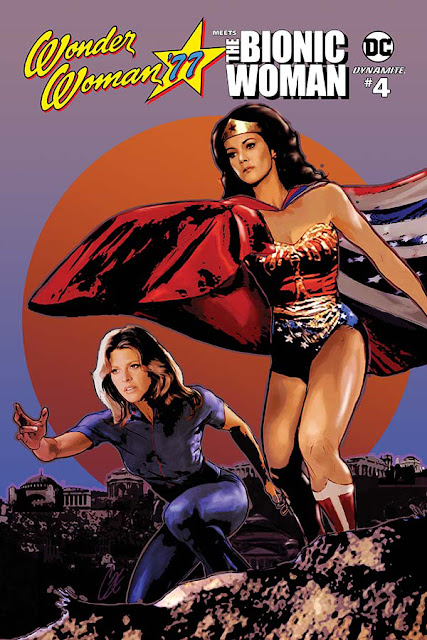 (W) Andy Mangels (A) Judit Tondora (CA) Cat Staggs
We Rebuilt Them...Better, Faster, Stronger! In a brief respite from battle, Diana Prince (aka Wonder Woman) and Jaime Sommers (The Bionic Woman) visit the exotic Paradise Island, where some familiar faces from the past greet them! Meanwhile, the evil cadre of villains are poised to strike, and their targets will shake our heroines to the core!
The team-up you demanded is written by best-selling author ANDY MANGELS (Star Trek & Star Wars) and illustrated by JUDIT TONDORA (Grimm Fairy Tales). WONDER WOMAN '77 MEETS THE BIONIC WOMAN continues to get unprecedented attention from the mainstream and internet media... make sure to order enough copies! 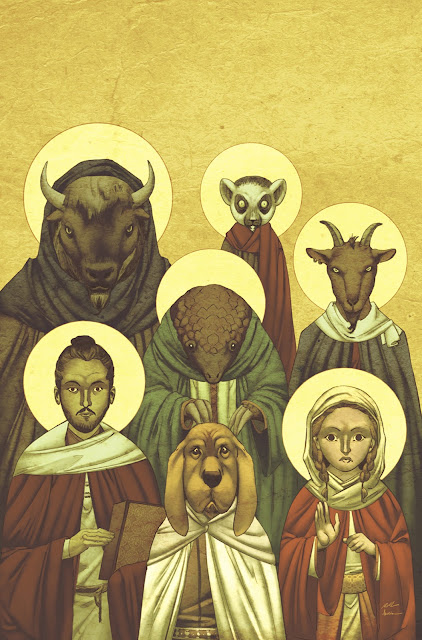 ANIMOSITY #7
(W) Marguerite Bennett (A/CA) Rafael de Latorre
As Jesse and Sandor embark on their American road trip, their faith in life, death - and each other - is tested at last. From the writer of INSEXTS, BOMBSHELLS, and A-FORCE and artist of SUPERZERO. 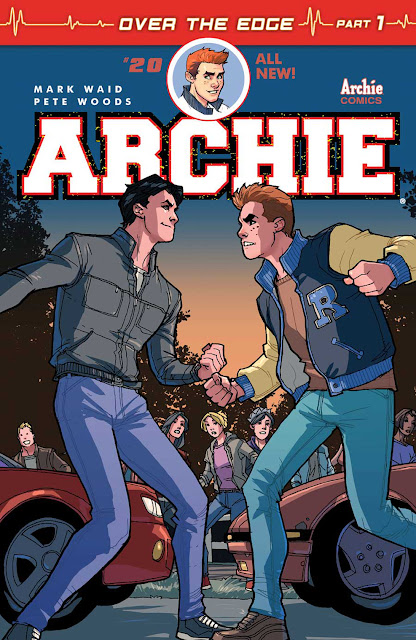 (W) Mark Waid (A/CA) Pete Woods
It's the BIGGEST comic event in ARCHIE HISTORY! Archie and Reggie's ongoing feud reaches a fever pitch that pits the two against each other in a thrill ride on the deadly Serpent's Tail! 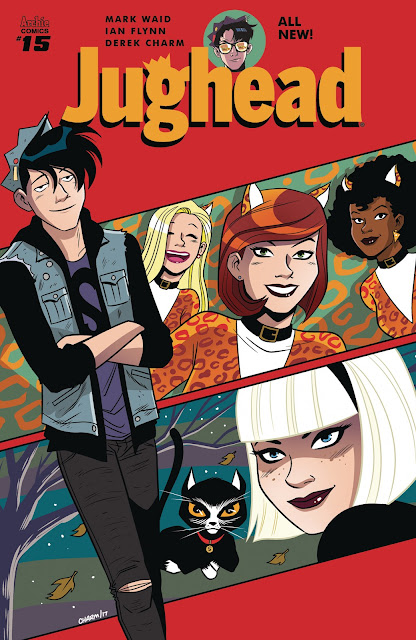 (W) Ryan North (A/CA) Derek Charm
Sabrina the Teenage Witch tries to do something nice for Jughead, but it ends up creating a comedy of errors in which he's the most desired bachelor in town! From the new writing team of Mark Waid (Archie) and Ian Flynn (Sonic the Hedgehog). 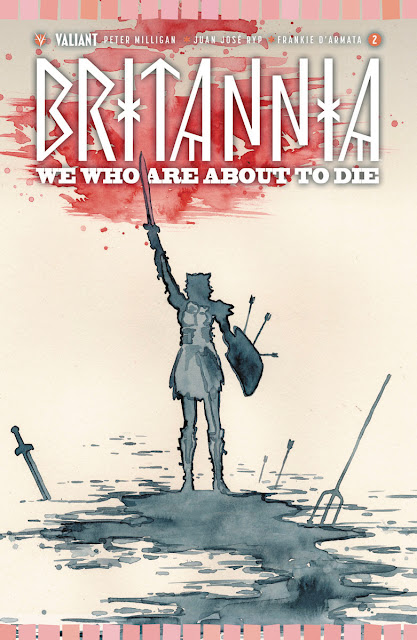 (W) Peter Milligan (A) Juan Jose Ryp (CA) David Mack
God complex! Achillia and Antonius remain hot on the trail of whatever - or whoever - is causing the civilization's elite to fall into a deadly illness. As gods and monsters stalk the pair both inside and outside of the gladiatorial arena, Rome's greatest detective and its rising gladiator must separate the hauntings from hoaxes in a blood-boiling search for the truth. But will Achillia and Antonius solve the mystery and and prove Rubria's innocence in time, or will Nero's swift vengeance strike first? 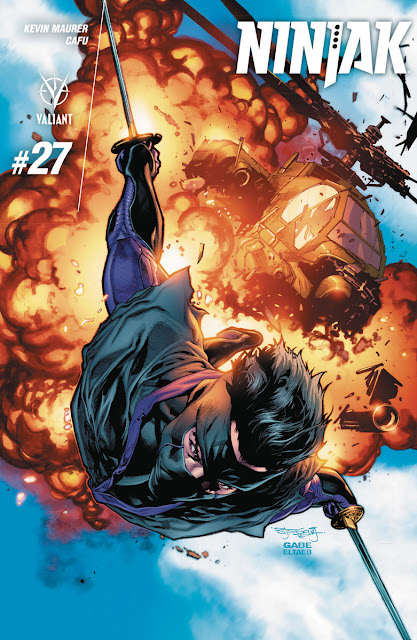 (W) Matt Kindt (A) CAFU (CA) Stephen Segovia
Snakebite! He's fought the Shadow Seven, journeyed to the Deadside, and bested death itself, but MI-6's top superspy has never tested his limits like this! When Ninjak is assigned to the Middle East for a seemingly simple extraction, this once-routine mission will quickly turns south when the laws of nature are turned upside down...and mutated soldiers bearing the animalistic abilities of nature's deadly predators strike from the shadows! Now, Ninjak must hone his lethal skills and channel his inner warrior like never before...or end up at the bottom of the food chain! 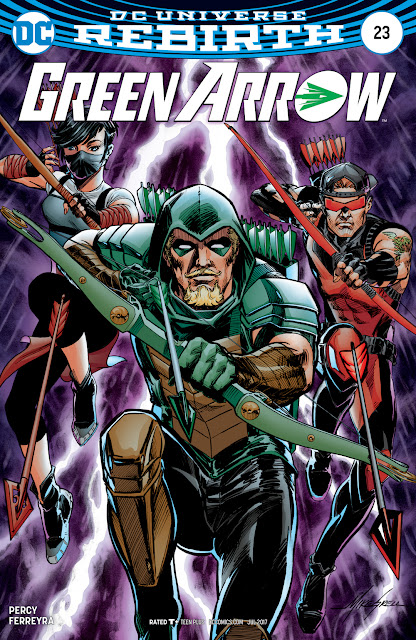 (W) Ben Percy (A) Juan Ferreyra (CA) Mike Grell
"THE RISE OF STAR CITY" part three! As Green Arrow discovers the Ninth's Circle's true plan for Seattle, so too does Oliver Queen learn the truth about his family's ancient role in the city's coming destruction. Shocking secrets are laid bare as the biggest GREEN ARROW story ever drives toward its epic conclusion.
RATED T+ 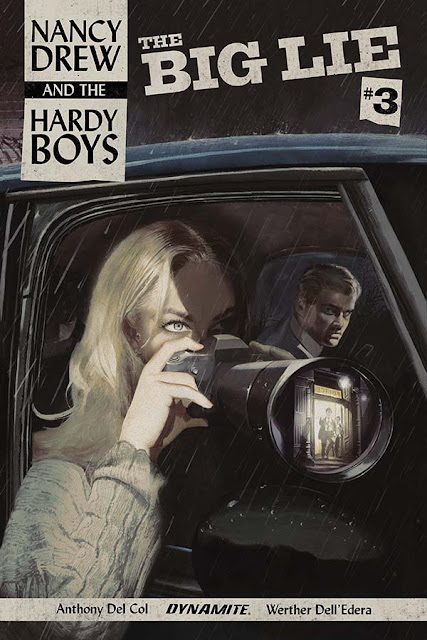 (W) Anthony Del Col (A) Werther Dell'Edera (CA) Fay Dalton
The team's plan has been set into motion - but will they get caught in their own trap? The three teen detectives must keep up their appearances as criminals - and also stay alive! - while undercover with a band of thieves dead-set on pulling a major heist in of one of the most heavily-guarded places in Bayport! 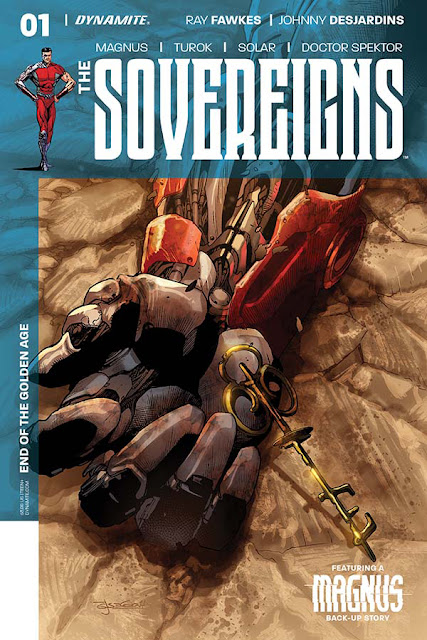 (W) Ray Fawkes, Kyle Higgins (A) Johnny Desjardins, Jorge Fornes (CA) Stephen Segovia
The epic that will redefine the Gold Key heroes continues! The year is 2025, Turok has gone missing and Magnus is good and worried about that. When even a time traveling mission to confer with Doctor Spektor and the creature once known as Solar don't yield any answers, Magnus must brave the unknown to track the missing hero down. Plus: An all-new Magnus backup by Kyle Higgins and Jorge Fornés that sets the stage for next month's big announcement! 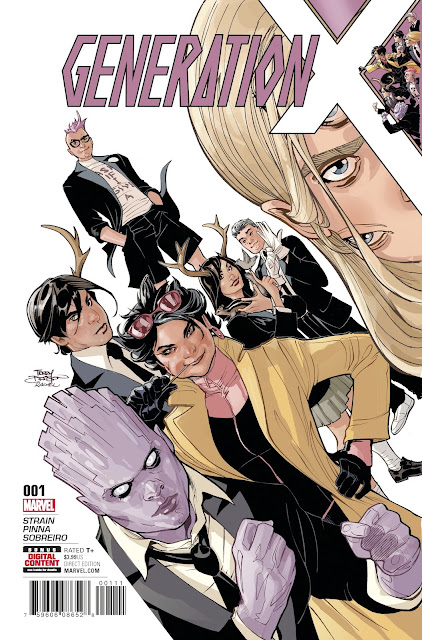 (W) Christina Strain (A) Amilcar Pinna (CA) Terry Dodson
The Xavier Institute for Mutant Education and Outreach has opened its doors and is ready to foster the next generation of heroes and diplomats! But this time around, the X-Men recognize an unfortunate truth: not all mutants are created equal. Some mutants are not made to fight Sentinels or serve as ambassadors on behalf of their kind. Some mutants will just be lucky to survive another day in a world that hates and fears them. And who better to mentor mutantkind's lovable losers than perpetual sidekick Jubilee? But will Jubilee and GENERATION X survive the experience??
Rated T+ 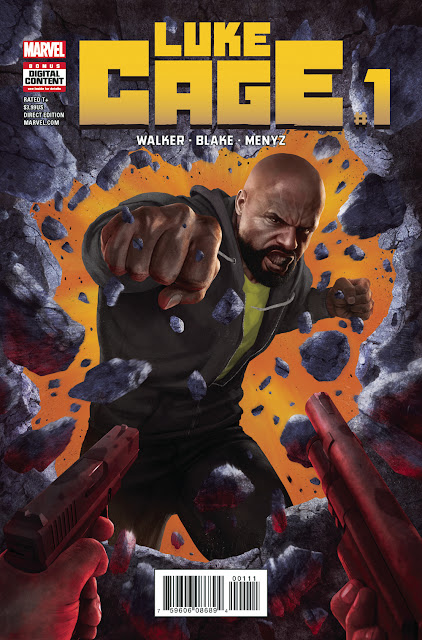 (W) David Walker (A) Nelson Blake (CA) Rahzzah
CAGED VENGEANCE!
Dr. Noah Burstein, the man who made Luke Cage into the unbreakable hero he is today, is dead. When Luke goes down to New Orleans for the funeral, he finds The Big Easy to be pretty &$#% difficult. Mysterious billionaires, a woman with a secret, amped-up gangs and a shadowy figure all lead Luke to the conclusion that there's more to his father-figure's death than meets the eye. He's looking for answers, and it's a bad day for anyone in his way!
Rated T+ 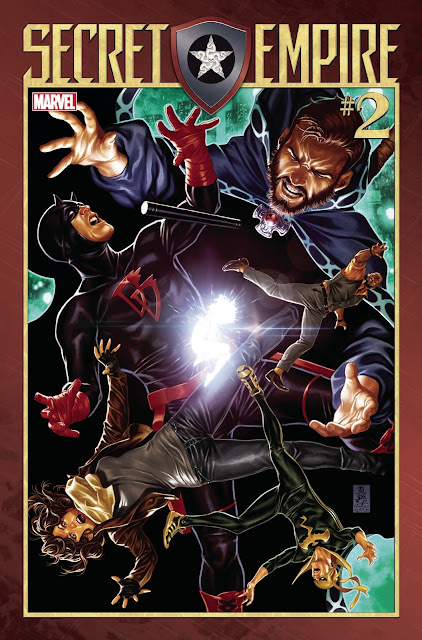 (W) Nick Spencer (A) Andrea Sorrentino (CA) Mark Brooks
Enshrouded in darkness, plagued by the minions of Baron Mordo and cut off from all assistance, The Defenders and Doctor Strange struggle to save the lives of the innocent people consigned to this hell on Earth. Will Dagger prove to be the key to stopping this nightmare? Meanwhile, will the appearance of a new hero provide Iron Man with the key to Captain America's startling change?  THE SECRET EMPIRE WILL DEFEND YOU!
Rated T+ 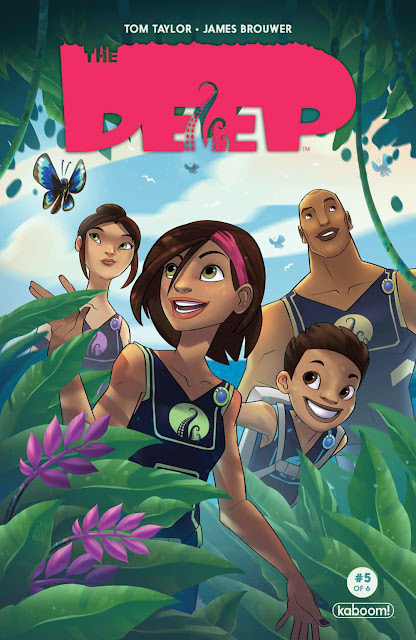 (W) Tom Taylor (A/CA) James Brouwer
The Nekton family discovers a secret about the mysterious island, and it puts the two youngest Nektons in jeopardy! 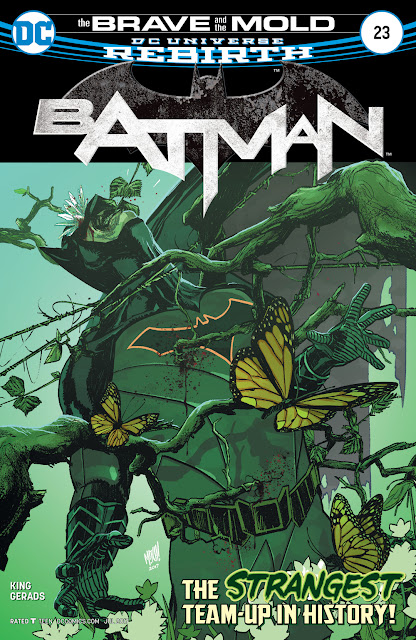 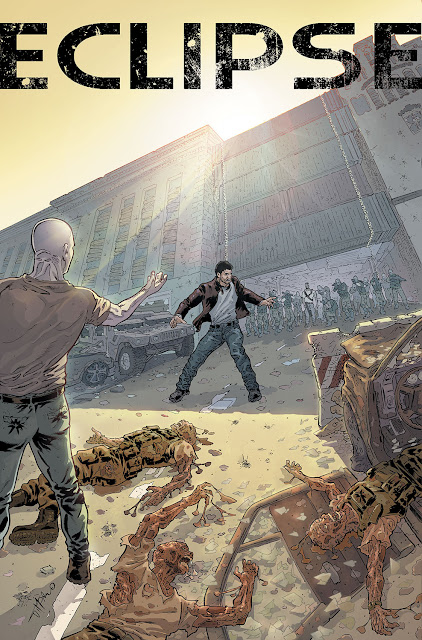 (W) Zack Kaplan (A/CA) Giovanni Timpano
Both Bax and Cielo get closer to finding answers about Solarity's secrets and the men who do not burn in the sunlight, but first, Bax must survive a war zone and Cielo must escape her father's agents in a risky daytime bridge-crossing out of the city. 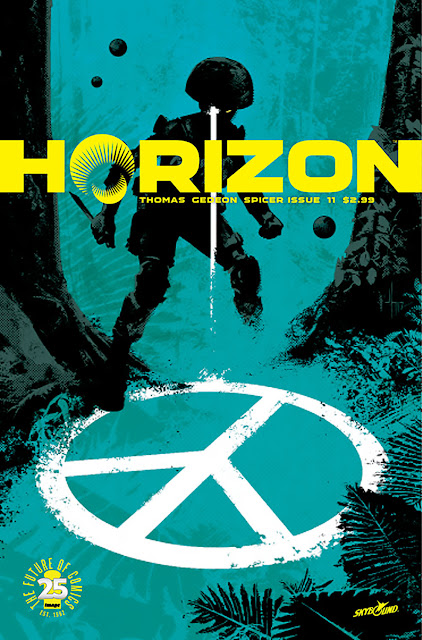 (W) Brandon Thomas (A) Juan Gedeon (CA) Jason Howard
Mariol Coza is a changed woman. She no longer harms others, and she certainly does not kill. But in war, there are always exceptions... 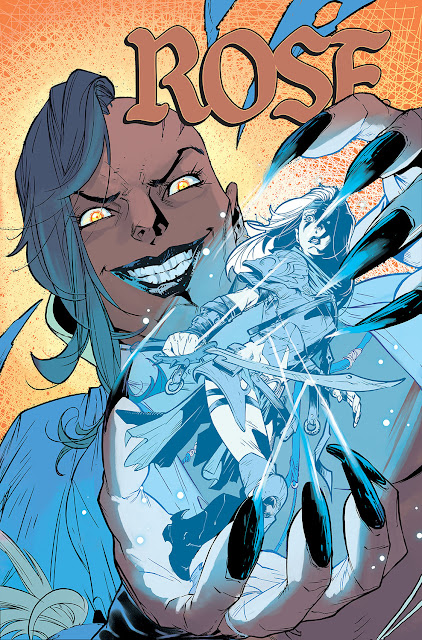 (W) Meredith Finch (A/CA) Ig Guara
Rose is shaken when she discovers the depth of Drucilla's depravity. While she loses faith in herself, her allies have a chance encounter that raises questions of exactly who and what Rose is. Can Rose gain back their trust, or will they all be undone by a darkness that threatens to consume everything in its path? 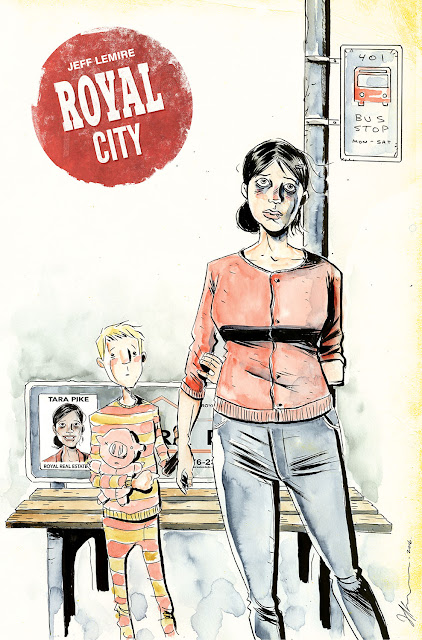 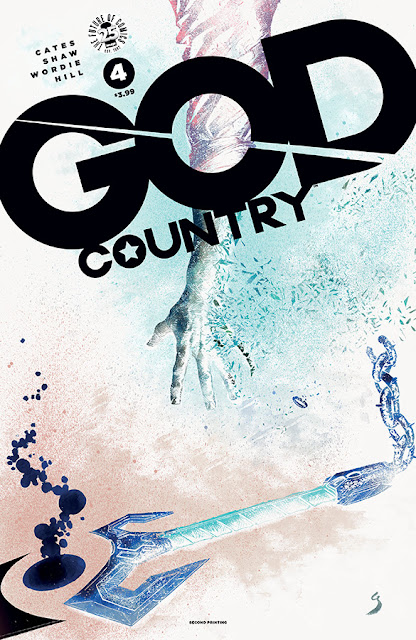