I'm new to Eternal Warrior but now I see what all the fuss is. Robert Venditti has made one rousing adventure series every time he gets his hands on Gilad Anni-Padda and this self-contained story is no exception. 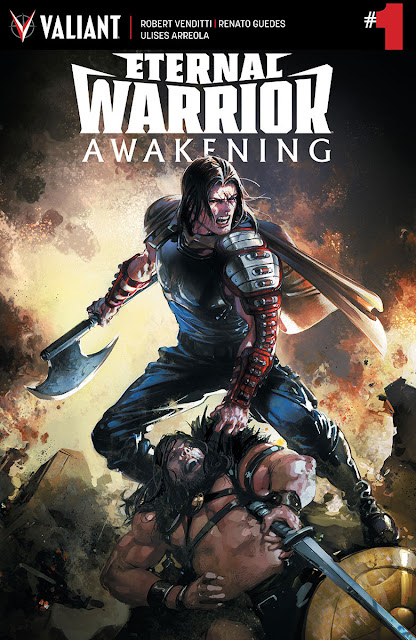 'Eternal Warrior: Awakening' #1 takes its name quite literal as Gilad awakens after a severe head injury during the course of battle. He recovers with the help a local tribe but can't remember anything of his past. He's happy to be farmer unaware of the war waging elsewhere, a fight he was destined to finished as the Eternal Warrior. Until a stranger visits and reminds him of his duty to mother earth and the impending threat a wicked king poses to all. Slowly, the memories begin to flood back, the violent flashbacks propels the reader in catching up to what makes Gilad so formidable in the first place.

Renato Guedes does a superior job laying out what could have been a confusing series of events in well-conceived scenes that flow from present day to the past. There's a number of thrilling fight scenes that are vicious and visceral. Ulises Arreola's colors are subtle and rich until they give way to some bloody confrontations and then the red begins to flow.

'Eternal Warrior: Awakening' is a solid start to a new series that doesn't pretend to be something its not. Gilad is here to kick ass and take names. While this first installment ends rather abruptly it provides a ton of great action and lays the foundation for more thrilling adventure. Venditti and Valiant value this property and it shows. It's also a great introduction to another exciting title from Valiant's long list of great books.