'iZOMBIE: The Complete Third Season' Gets a DVD Release Date with Bonus Materials

In what is arguably the show's best season yet, Warner Bros Home Entertainment has announced the release date for iZOMBIE: The Complete Third Season on DVD. On October 3, 2017, you can grab your copy of CW's hit horror comedy starring Rose McIver, Malcolm Goodwin, Rahul Kohli, Robert Buckley, David Anders, and Aly Michalka. 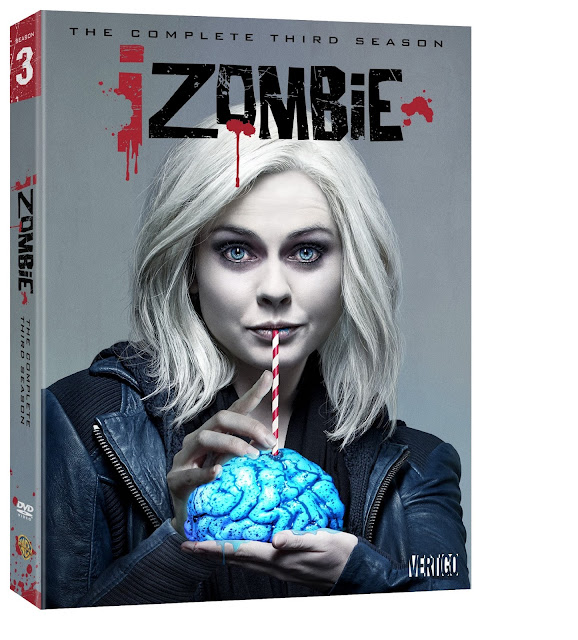 Based on DC Comics' Vertigo comic by Chris Roberson and Michael Allred, iZombie has garnered a loyal fanbase resulting in nearly two million viewers a week. Liv (McIver) continues to solve weekly murder mysterious by eating a victim's brain resulting in taking on some eclectic personalities like a dominatrix, an office gossip, a pre-school teacher, and more. It's afforded the versatile McIver some of her best performances during the series that are funny and smart. Now that Goodwin's Detective Clive Babineaux is on Liv's secret as a zombie, it's elevated the dynamics between them as crime-fighting partners. This has led to some hilarious reactions as the straight-man to McIver's wild card brain-influenced Liv.

The season-long investigation of the murder of a zombie family close to Clive leads Ravi (Kohli) to a group of conspiracy theorists who want to expose the existence of zombies and lead a militia against them. This larger investigation has allowed the supporting cast to tie-in in broader ways while giving them compelling subplots. Major (Buckley) joins a military contractor made of zombies looking to protect zombie-kind if and when they're exposed and threatened. Things get a little complicated when Major returns to human. Peyton's (Michalka) relationships with Ravi and Blaine (Anders) get resolved while her legal case might reveal more than meets the eye. It's a lot a fan can sink their teeth into and the DVD set promises to include more features to enjoy.

"After three strong seasons, iZombie continues to have ravenous fans who are always hungry for more" said Rosemary Markson, WBHE Senior Vice President, Television Marketing. "We think the loyal fan base will be very pleased with the special features and the 13 visionary episodes from season three."

There's still three more episodes to season 3 with "Conspiracy Weary" airing tonight, Tuesday 13, 2017, that finds Liv and Blaine coming to the rescue, the consumption of conspiracy theorist-brain, and Ravi makes a startling discovery. 'iZombie' has been a refreshing addition to the multitude of comic book-based adaptations on television. It seamlessly mixes comedy, horror, and drama into an hour of satisfying entertainment. Take a look at this sneak peek of tonight's episode below.

SYNOPSIS: “Conspiracy Weary” – (9:00-10:00 p.m. ET) (TV-14) SEND IN THE CAVALRY – Liv (Rose McIver) and Blaine (David Anders) come to the rescue of one of their own. They consume the brains of a conspiracy theorist and paranoia ensues. Meanwhile, as they continue to search for conspiracy theories that may or may not exist, Liv researches Major’s (Robert Buckley) new friend. Finally, Ravi (Rahul Kohli) makes a surprising discovery of his own. Malcolm Goodwin and Aly Michalka also star. The episode was written by Bob Dearden and Directed by Mark Piznarski (#311).

Here are all the details regarding the episodes, bonus materials, and technical specs:

Check out these other seasons available now on Amazon: