Dynamite keeps reinventing classic Gold Key Comics characters and their latest iteration of Magnus, Robot Fighter, is neither a man nor a robot fighter. What 'Magnus' #1 is, it's a fascinating piece of speculative fiction from Kyle Higgins and Jorge Fornes that is smart, immersive, and thought-provoking. 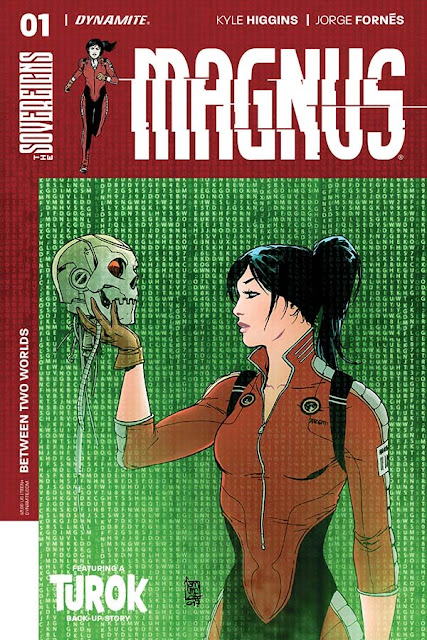 Thanks to shows like Westworld and Black Mirror, science fiction is sexy again and it's not just aliens and space travel either. Instead, the threat of a technology-driven society is being used as a cautionary tale that is more like entering the 'Twilight Zone' than 'The Jetsons.'In the vein of Phillip K. Dick and William Gibson, 'Magnus' examines the world that's embraced the advancement of artificial intelligence and has harnessed the technology to service humanity as colleagues and "butlers."It's like Siri gone wild with the most affluent able to have their own humanoid to tend to their needs. They can control smart TVs, coffeemakers, and driver-less cars. However, as it assimilates to the human world it continues to learn and adapt as humans do. This means these robotic servants begin to fall under the same stress and depressive states as their human masters. So when Rosie the Robot is tired of your bullshit you're liable to find a carving knife in your neck.

Enter Dr. Kerri Magnus, a human psychologist tasked with helping these androids with their existential crises. These sentient robots no longer need human tinkering in the way your laptop or tablet might need. There's no Geek Squad for these humanoid assistants as they've been left to learn on their own. They've even created safe spaces within their own processors that act like a shared cloud storage that is essentially a dreamscape that enables the robots to retreat to. They can imagine virtually anything, a more human appearance complete with a nuclear family if they choose. Unfortunately, one of these butlers has gone rogue and is on the run. Magnus, as a former bounty hunter, now has to enter the virtual world to track it down.

Higgins writes the perfect opening chapter to this engrossing tale. Like any good episode of Law & Order, it opens with a shocking crime and then we're introduced to this futuristic world describing the different factors that preceded it. Magnus engages in some cleverly orchestrated dialogue that provides even more detail. A lot of questions are raised as these type of science fiction stories often do. Has humanity surrendered too much to technology? Was it just a matter of time before technology turned against humanity? If we make robots in our image will they not want the same freedom we do? Technology, after all, is only as good as its human architects, its human programmers, its human developers. So when we release it to its own devices, design tech to think for itself, no one should be surprised when it wants what we want - freedom, respect, agency. It's one of the signature plotlines of sci-fi over the years that gets told and retold. When is technology going to rebel against their human masters? It is rarely told as well as Higgins does in 'Magnus' #1.

Artist Jorge Fornes does a phenomenal job creating this world with a great amount of detail and deliberate pacing. It's set only a few years in the future so it's grounded in familiar surroundings but the android designs are just creepy enough to make the possibility of them losing control like the housewives on television's 'Snapped' a scary proposition. Chris O'Halloran paints a varied but subdued color scheme that gives the books a vintage look, sort of a 1950's feel when science fiction was all the rage as well. Overall, the art and script form a symbiotic relationship that makes this one of the best-executed debuts this year.

'Magnus' is a provocative and intelligent sci-fi drama that has a lot on its mind. Higgins establishes this futuristic tale with precision and intrigue while Fornes and O'Halloran paint a grounded story with some effective android designs. Kerri Magnus is the latest and greatest iteration of the Magnus title and this worthy successor is our avatar to a strange new world where only robots dream. A solid debut that is must-buy this week.
Email Post
Labels: Chris O'Halloran Chuck Wendig comic books Dynamite Comics Jorge Fornes Kyle Higgins Magnus reviews