'Spencer & Locke' debuted a month ago with an ambitious premise.  What if the beloved comic strip by Bill Watterson 'Calvin and Hobbes' and Frank Miller's gritty noir 'Sin City' had a baby? It's quite the goal to use two iconic works and mash them together to create your own comic. How can you honor both without making a mockery of either? Somehow David Pepose and Jorge Santiago, Jr. succeed in making it work as more than an homage but an effective vehicle for a quality noir detective story. 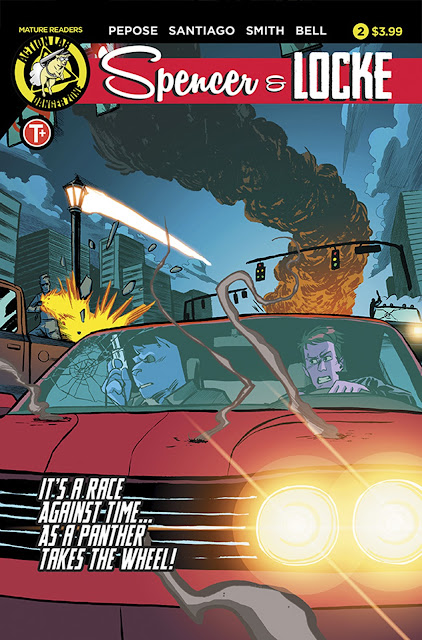 While the first issue was more of a dark comedy, introducing Detective Locke and his imaginary partner who also happens to be a stuffed panther named Spencer, this issue took a much darker poignant turn. Issue one was a great debut that set up Locke's world and had a number of funny moments and Santiago's Waterson-style art for flashbacks were especially amusing and accurate. This is a murder investigation, after all, so Locke is determined to find the killer of his childhood
sweetheart Sophie. But first, the opening scene reveals the possible trauma Locke experienced as a child that triggered his long time coping mechanism of an imaginary friend. It's tactfully done and all the more shocking done in Waterson's art. It gives this mature title more poignancy and depth than I expected.

Locke isn't pulling any punches looking for answers. He's reckless and out of control at times and rightfully so. There's a child's life in the balance, Sophie's daughter, and he'll do whatever it takes to save her. Spencer takes a smaller role this time although is still asked to take the wheel during a car chase(!). A clue leads to a pivotal point as the duo end up at the Red Rose gentleman's club where the present and the past collide for Locke. If the first issue honored 'Calvin and Hobbes,' issue two clearly favors 'Sin City.' A seedy strip club, a femme fatale, a brawl, gun play, and a car chase all contribute to the violent and dangerous nature of the world Spencer and Locke have to navigate. It's the perfect canvas for Santiago and colorist Jasen Smith to bring to life.

More than anything, Santiago is a great conductor, laying out a symphony of images that convey a spectrum of emotion and action. The ease with which he alternates between the shadowy realism of the present with the adorable renderings of a cartoonish past is impressive. His versatility elevates the story but the pacing and varied perspectives energize the action sequences to a whole different level. Meanwhile, Smith provides some bold rich colors that pop against the black shadows in the club and in the streets. Purples, pinks, and reds jump off the page to electrify the scenes making them hard to look away, engrossing you further into the pulse-pounding action.

'Spencer & Locke' is far more than its premise suggests. It might be a love letter to 'Calvin and Hobbes' and 'Sin City' but it stands on its own as a police procedural murder mystery. Locke is a man obsessed, looking for justice while still battling his own demons. This is a unique hard-boiled crime thriller that is every bit as haunting and riveting as the genre implies.