All good things must come to an end and that's never more appropriate than limited comic book series like 'Spencer & Locke' by David Pepose, Jorge Santiago, Jr., and Jasen Smith. The thrilling and poignant crime mystery that pays homage to a beloved comic strip has surpassed all expectations becoming one of the best comics of the year. 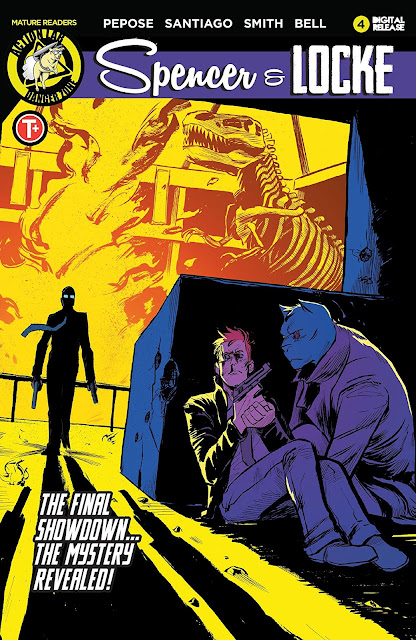 The series has been a surprisingly effective psychological crime drama that's taken Detective Locke through some dark episodes. Unable to relinquish a traumatic past, Locke finds solace in an imaginary friend, a big blue panther named Spencer. A nod to the legendary comic strip 'Calvin and Hobbes' by Bill Watterson, Pepose's take is much more adult and disturbing. He's been able to combine these different elements with the present day in an emotional roller coaster wrapped in an action-packed mystery. It all comes to a conclusion in issue four where Sophie's killer is revealed and Locke must face his drug lord father.

This is one of those instances where a miniseries could have benefited from a six-issue run instead of four. As great as the build-up has been to this point, with Locke descending into madness, drugged and beaten, only to escape certain death in his efforts to find Sophie's daughter who's being held hostage, this finale felt rushed a bit with little development of Locke's mustache-twirling father. It's all neatly tied up by the end but with little investment in Locke's villainous dad this challenge feels unearned. Where Locke battled personal demons throughout the series, this physical confrontation feels less impactful overall.

Nonetheless, the series has been such a revelation thematically and executed with such precision that I wonder if any conclusion would have satisfied and lived up to what came before. Pepose, Santiago, and Smith have created such a dynamic story that even if the ending falls a little flat it doesn't diminish the overall series as a whole. It's no wonder it's being developed as a film.

Santiago has been a Swiss Army Knife as an artist, providing an uncommon versatility alternating between two distinctive styles and excelling at both. The Watterson-like flashbacks of young Spencer and Locke and the present day noir of shadows and action. There's a cartoonish look to it all but kept grounded by the very adult script of pain, loss, regret, and vengeance. Smith chose a colorful palette to infuse life into each of Santiago's scenes. Bright and pastel in the flashbacks or bold and deep in the present. The art team has been instrumental in finding the right tone and conveying the emotional weight of some heavy scenes.

'Spencer and Locke' has been heart-stopping and hear-breaking. What may have seemed like a clever gimmick in incorporating the childish wonder of 'Calvin and Hobbes' and turning it on it's head with a grittier darker version became a sobering account of abuse and tragedy. A mentally jarring journey down the road to forgiveness and justice. 'Spencer and Locke' is that diamond in the rough you hear about when a new book from a small publisher just knocks your socks off. This is one of the year's best.