There comes a point in any superhero origin story that reveals a new hero's power. Whether by a radioactive spider, gamma rays, or alien ring using your powers for the first time should be a mind-blowing experience, exhilarating, and breathtaking venture. In 'Generation Gone' #2, this is perfectly demonstrated when one of the newly infected, Elena, takes to the skies, awestruck and excited. 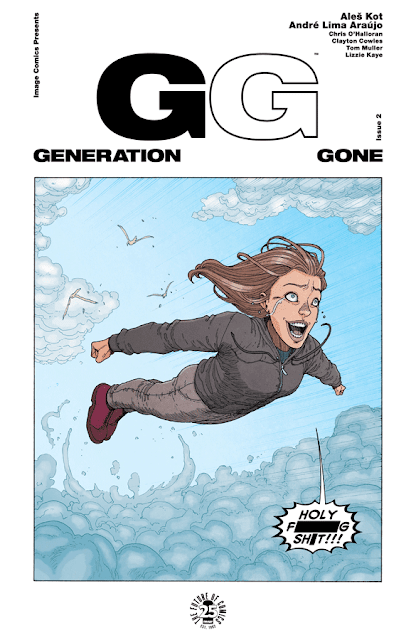 The second issue picks up soon after Elena, Baldwin, and Nick become infected with an online virus that results in them consuming some type black goo. What they thought was going to be an easy hack to fill their bank accounts was actually a trap by the scientist Akio to test his coding for human enhancement. He purposely targeted these teenagers and despite disobeying the General's orders to stand down now have to try to contain them before they hurt themselves or others.

Elena's exuberant joy is juxtaposed with Nick's confusion over what his power is. It turns out he's impenetrable while Baldwin hasn't quite discovered his power just yet. In certain ways, the powers of Elena and Nick mimic their personalities. Elena seemed to be a responsible and kind free spirit who inexplicably was submissive to Nick's arrogant and demeaning behavior as his girlfriend. This new power essentially gives her the freedom to soar in literal ways that he was trying to keep her down by being a dick. Nick's bullet-proof skin is just the right metaphor for his ability to deflect the love and kindness that was coming from Elena.

Baldwin's powers haven't manifested yet but a violent demonstration on the street exposes the group in front of television cameras. Akio and the general are on a transport headed to meet them when they witness their use of power on TV. Their secret is out. Is it too late to contain them now that the footage has gone viral?

Andre Araujo has a very clean distinctive art style reminiscent of work by Steve Skroce (They Stand on Guard) and Simon Gane (They're Not Like Us). Araujo allows panels to breathe by allowing enough empty space to highlight the foreground characters and emphasize the dialogue. Other times Araujo tells the story with facial expressions and body language. The demonstration riot is where Araujo really excels in showing the escalation of the violence, keeping our heroes centered amid the chaos and seeing how they respond. All with little to no dialogue. Chris O'Halloran color work is subtle but effective in changing the mood. From the whimsical and happy shades of a bright blue sky to the raging yellow-orange flames of a red-hot sun to the magentas and blues of the riot, Chris captures the tone of each scene perfectly.

'Generation Gone' is a surprisingly fresh approach to the superhero comic genre. It's set firmly in the present where real life crosses into fiction - protests, Millennials, cancer care, scientific research red tape, hacking, etc. This story is still unfolding and could take a dark turn if I know Ales Kot at all. 'Generation Gone' will remind you of the movie Chronicle, but it's more relevant, more urgent, and intriguing as hell. Highly recommended.