We're back with this week's comic book recommendations and a new slideshow featuring a brand new track from U2.

It's an eclectic mix of indies and mainstream titles. One of the most anticipated is also one of the best-reviewed series of comics in Black Mask Studios' 4 Kids Walk Into A Bank by Matthew Rosenberg and Tyler Boss. Of course, there are more continuing titles worth checking out - Postal, Harbinger Renegade, Batman, Giant Days, Motor Crush, and Elsewhere. Brand new titles include Captain Phasma, Venomverse, Made Men, Bombshells United, and Scales & Scoundrels. You can't go wrong this week. Happy reading! 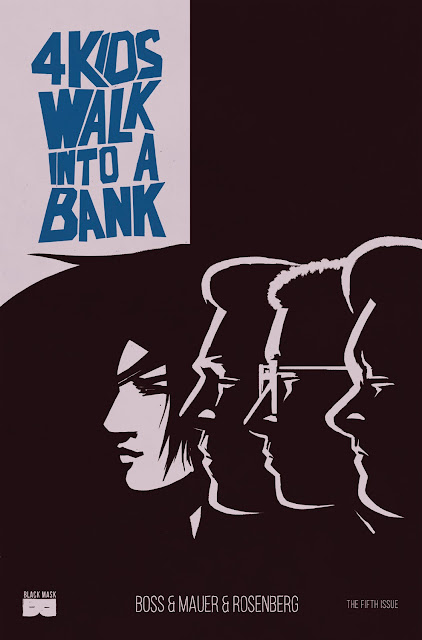 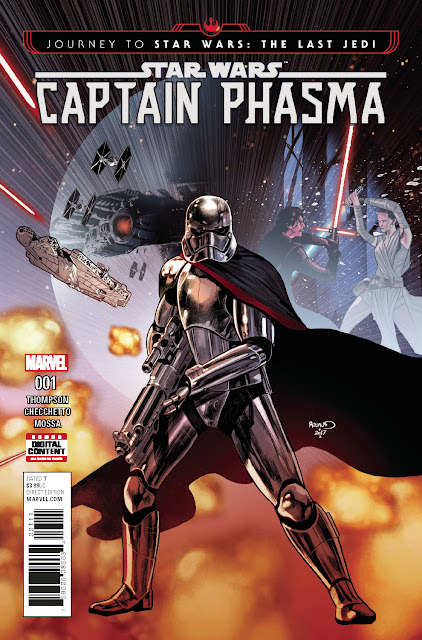 (W) Kelly Thompson (A) Marco Checchetto (CA) Paul Renaud
As the excitement ramps up for this December's Star Wars: The Last Jedi, come back with us to the final moments of The Force Awakens and the destruction of Starkiller Base to learn the fate of Captain Phasma! Captured by the Resistance and thrown into a garbage masher, we follow the chrome-adorned warrior from the site of the First Order's biggest defeat to the doorstep of this holiday season's biggest blockbuster! Written by Kelly Thompson (HAWKEYE, STAR WARS ANNUAL 2016) and drawn by Marco Checchetto (STAR WARS: SHATTERED EMPIRE, STAR WARS: SCREAMING CITADEL), Captain Phasma will recondition you to love Star Wars again!
Rated T 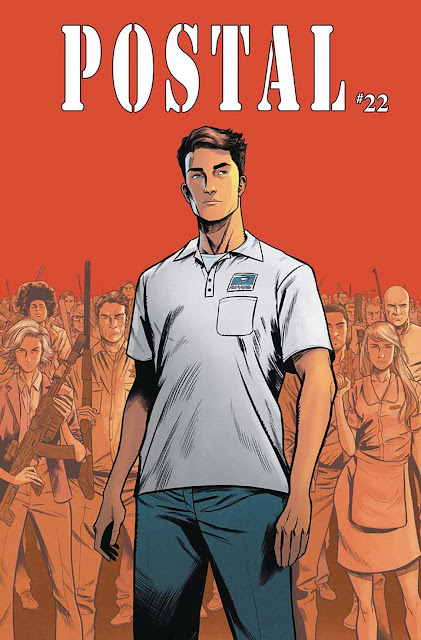 (W) Bryan Hill (A/CA) Isaac Goodhart
Mark gathers a coalition of the willing citizens of Eden to stand their ground against the oncoming onslaught of the FBI. 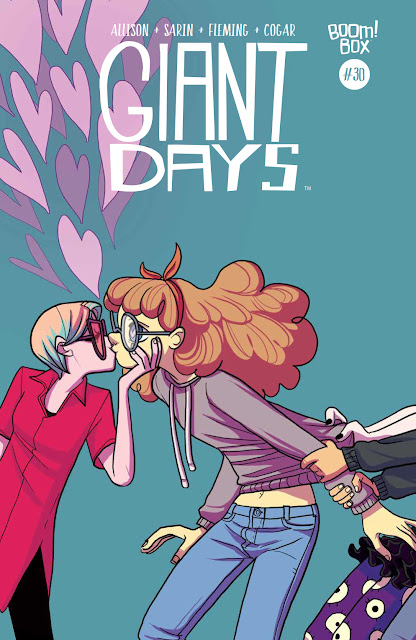 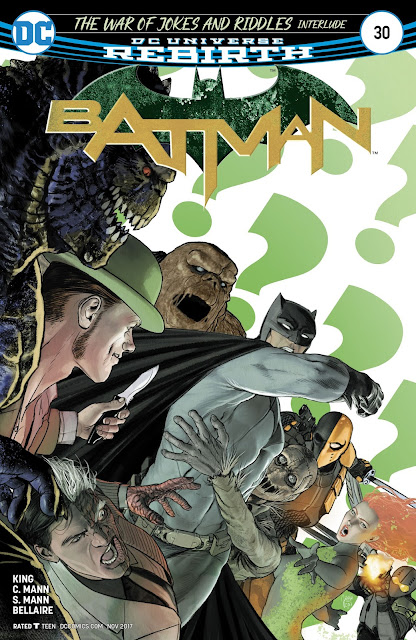 (W) Tom King (A) Clay Mann (CA) Mikel Janin
"THE BALLAD OF KITE MAN" part two! In our second "War of Jokes and Riddles" interlude, it's the making of a super-villain! He's been pushed by Batman to snitch on The Joker, and cajoled by The Joker to betray Batman-now, the flunky who would be Kite Man finally snaps. He's lost everything, and a life of crime is the only way to go. 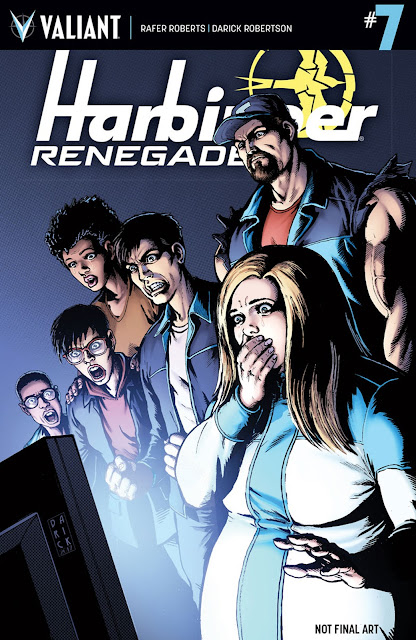 (W) Rafer Roberts (A/CA) Darick Robertson
Moving targets! "MASSACRE" has claimed a life from the Renegades' own ranks...and their new mission starts now: to rally as many psiots to their cause as possible. Now, this damaged team of telekinetic teenagers are off the grid and on the move, traveling America to recruit soldiers for the inevitable war they all see coming. But they are being watched...
"MASSACRE" seeks its next victim as multiple Harvey Award-nominated writer Rafer Roberts (Plastic Farm) and superstar artist Darick Robertson (The Boys, Transmetropolitan) escalate THE ROAD TO HARBINGER WARS 2 to the point of no return...and lead the Renegades toward their most seismic confrontation yet! 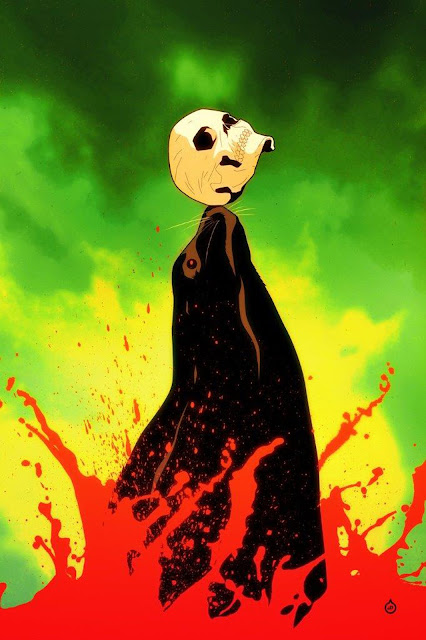 (W) Marguerite Bennett (A/CA) Juan Doe
The City by the Sea is under Animal control. Led by a mysterious beast, and under laws and dangers never known before, the city is on the brink of crisis-and one man stands between totalitarian order or ravenous chaos. What choice is there?
The exciting third chapter of this ANIMOSITY trilogy comes to a conclusion here, paving the way to AfterShock's new ongoing ANIMOSITY series, debuting next month!
From creator Marguerite Bennett (INSEXTS, Bombshells and Batwoman) and artist Juan Doe (AMERICAN MONSTER, WORLD READER). 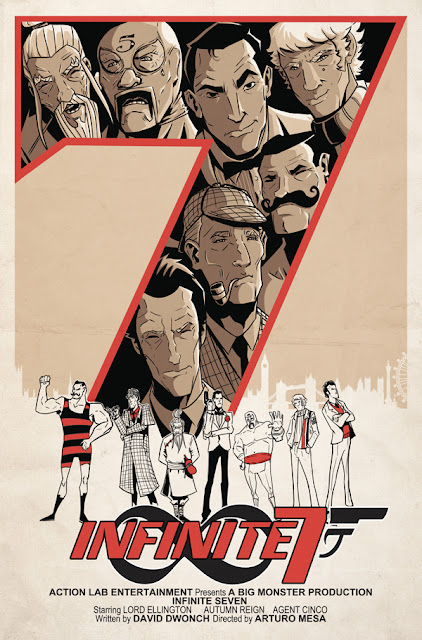 (W) Dave Dwonch (A/CA) Arturo Mesa
In this special issue, we reveal the secret history of the Infinite Seven's greatest enemy, and discover how he has been manipulating the Infinite Seven and the terrorist group Chimera. This issue sets the stage for an all-out war between the two, and nothing will be the same ever again! 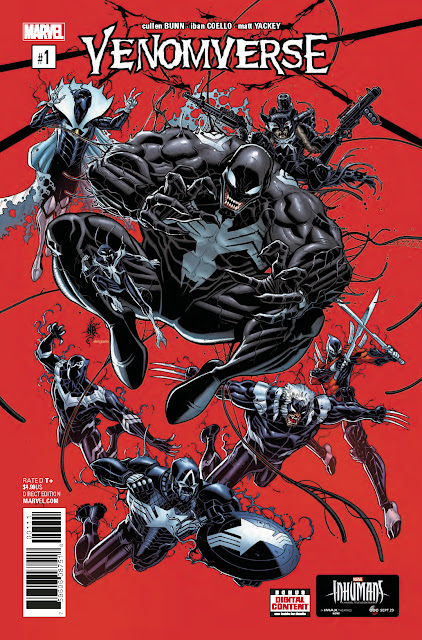 (W) Cullen Bunn (A) Iban Coello (CA) Nick Bradshaw
THE VENOM EPIC OF THE FALL STARTS HERE!
During a routine battle with the villainous Jack O'Lantern, Venom finds himself transported to a far-off world and learns a terrible truth - a deadly new species called the Poisons has emerged from the vastness of space, and to make matters worse, they're hunting Venoms! Trapped on the planet's surface with a ragtag band of Venomized heroes, Eddie has no choice but to mount a counteroffensive and hope to find a way home!
Rated T+ 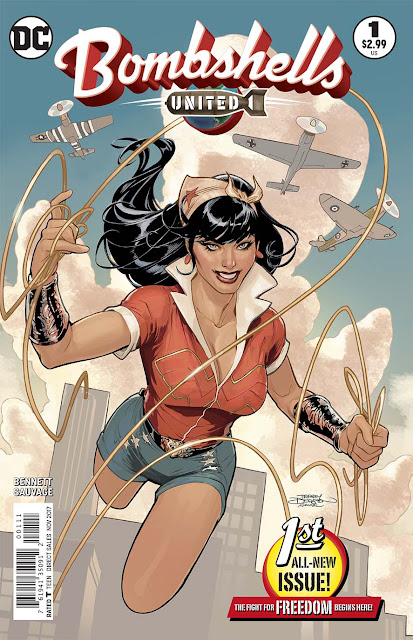 (W) Marguerite Bennett (A) Marguerite Sauvage (CA) Terry Dodson, Rachel Dodson
The Bombshells are back in an all-new series! As our new tale begins, the year is 1943, and Wonder Woman is called to Arizona for help by two young girls named Cassie Sandsmark and Donna Troy! The girls' friends and families are being displaced from their homes and forced into internment camps! To save them, can Wonder Woman fight against the same people she once fought alongside? 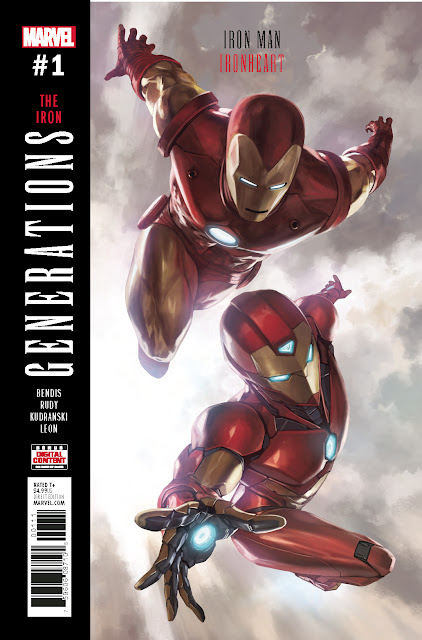 (W) Brian Michael Bendis (A) Marco Rudy (CA) Skan
• Riri Williams is given a once-in-a-lifetime chance to meet Tony Stark...Sorcerer Supreme!
•  Join Ironheart as she discovers things about the Iron Man legacy that will change her forever.
•  IRON MAN writer and Riri co-creator Bendis teams up with the award-winning multimedia artist Marco Rudy to give you a beautiful, unique look at the first step into a new era of Iron Man!
Rated T+ 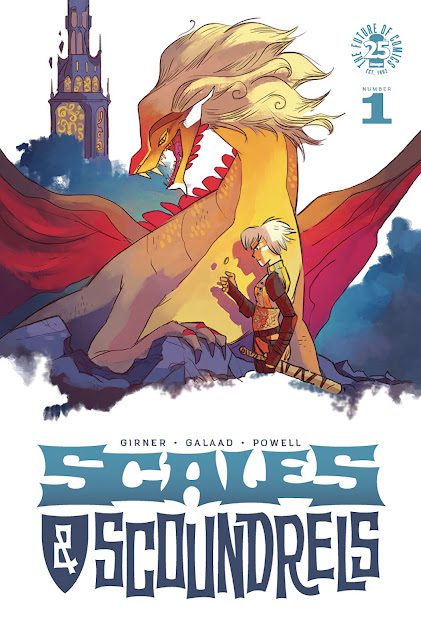 (W) Sebastian Girner (A/CA) Galaad
NEW SERIES! It's hard to make an honest living in a land brimming with magic and mystery, and treasure hunter Luvander is tired of being a penniless adventurer. Ever in search of gold and glory, she sets off for a fabled dungeon, "the Dragon's Maw," an ancient labyrinth, at the bottom of which slumbers endless wealth... or certain doom! But what starts out as a road to riches becomes the first step on an epic journey to destiny, for Luvander holds a secret in her heart that will shatter the chains of fate and bring light to a world encroached upon by an ancient darkness. Writer SEBASTIAN GIRNER (SHIRTLESS BEAR-FIGHTER!) and artist GALAAD are proud to present SCALES & SCOUNDRELS, a colorful and exciting new monthly fantasy adventure from Image Comics, for scoundrels of all ages! 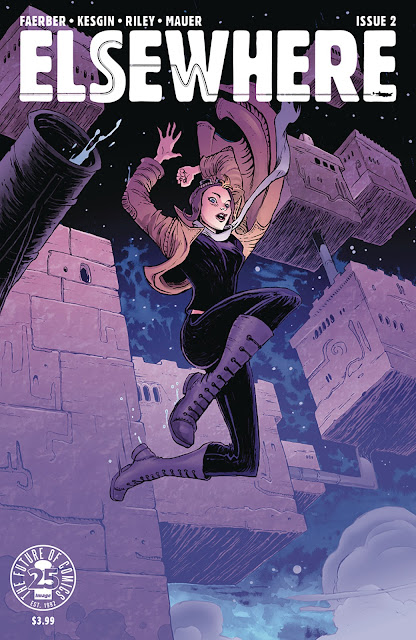 (W) Jay Faerber (A/CA) Sumeyye Kesgin
Amelia Earhart's adventures in a strange realm continue! All she wants to do is return home - but first she must escape from a warlord's impenetrable fortress and find her missing navigator. 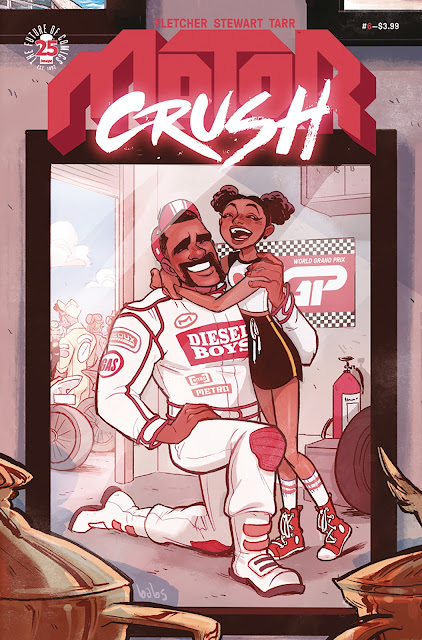 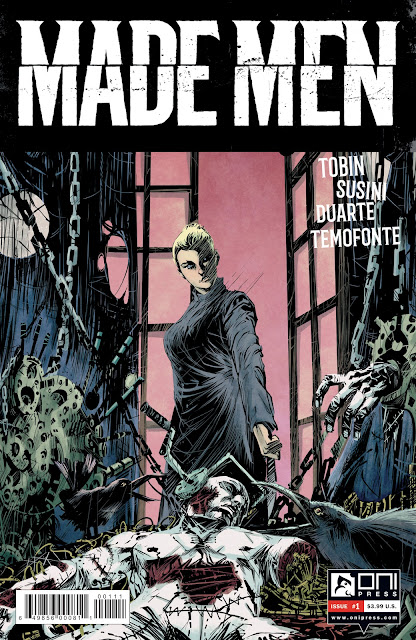 (W) Paul Tobin (A/CA) Arjuna Susini, Gonzalo Duarte
You don't know Jutte Shelley, but you might know her family. Before she was a Shelley, she was a Frankenstein. These days, she's a Detroit Special Ops officer. At least she was, until she and her entire team were ambushed during what should have been a routine call. Jutte watched as, one by one, her friends were gunned down. And then, in a flurry of bullets, Jutte fell too. But Jutte isn't like other people. She's a Frankenstein. And she knows all her family's secrets. Guess who's getting the gang back together?