ADVANCE REVIEW: 'No. 1 With A Bullet' #1 by Jacob Semahn, Jorge Corona, and Jen Hickman

The creators of the all-ages hit series Goners have returned to bring a more mature and futuristic tale about our obsession for digital media. Jacob Semahn and Jorge Corona present a cautionary tale in 'No. 1 With A Bullet' where being socially relevant has its limits when one's life becomes overexposed. 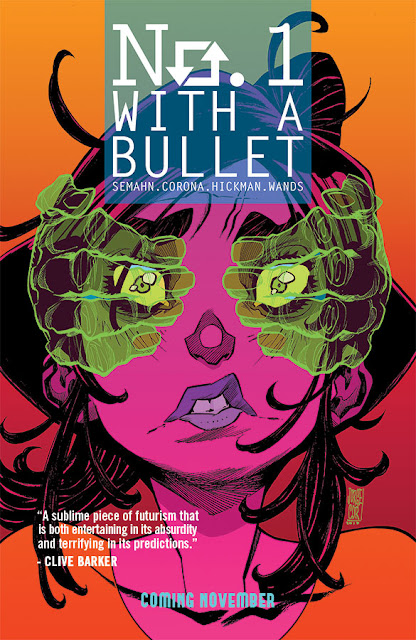 Meet Nash Huang, a dialed-in, sardonic, assistant to the popular talk show host Jad Davies who loves her girlfriend and follows her trolls on social media. A new sponsor has her sporting special contacts that can augment reality and record, replay, and relive her life. She's got her routine locked down. She runs around town for Jad and gets some airtime which makes her a target for the judgmental internet crowd. She has little sympathy for those who get hacked and have their private lives broadcast all over the web. That's until she becomes a victim herself and a sex tape upends her world.

Semahn understands society's reliance on technology and celebrity. It's what drives popular culture about the who said what, who got "hacked," who's feuding with whom, and what's the latest drama. The invasive nature of the technology age has been unforgiving opening up the lives of friends and strangers alike to the masses. If the advent of Google Glasses proved that society wasn't ready for such technology it certainly isn't for Iris Shutter contact lenses in 'No. 1 with a Bullet' either. Privacy and the loss of it is a relatable concern now so this futuristic tale isn't as far-fetched as it seems. It may be portrayed in exaggerated ways, especially with Corona's wonderful wild line style, but the threats to privacy, online abuse, or worse is all too real.

Huang makes for a great lead character to follow and someone who serves as the reader's avatar, experiencing this sudden invasion of privacy through her eyes. Semahn creates some interesting characters and Corona's designs are eclectic and intricate. Corona does some of his best work here throwing so many different looks and layouts. He gives Jen Hickman plenty to work with so she can flesh out these scenes with deep rich colors.

'No. 1 with a Bullet' is an irresistible piece of 'Black Mirror'-style tech horror that is all too real. With engaging characters, great dialogue, an involving mystery, and eye-popping visuals, Semahn, Corona, and Hickman have a hit series on their hands. Make sure to add this to your pull-list so you don't miss out in one of the year's most timely comics.