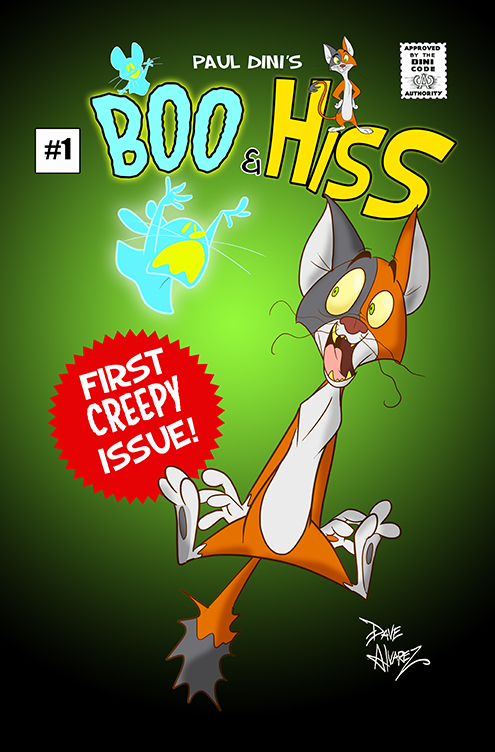 BOO & HISS turns the game of cat and mouse on its (paranormal) head! How many comics and cartoons have you seen where the cat chases the mouse endlessly, rarely catching him and never succeeding in vanquishing his rodent nemesis? In the world of BOO & HISS, that all changes: Hiss (the cat) catches Boo (the mouse) and DEVOURS him. There’s no coming back from that, right? WRONG! That’s where the story really begins! Boo returns as a ghost to enact vengeance on his feline murderer.

“BOO & HISS has been a passion project of mine for a couple of years. I was intrigued with the idea of what would happen in a classic cartoon predator/prey relationship if the predator, in this case, a cat, got to finally do in his adversary only to have the mouse return as a ghost and bedevil the cat. That sparked a bigger story about the afterlife, involving angels, devils, zombies, and just about everything else I could work in” says creator Paul Dini. “With the market for original humor comics shrinking, a Kickstarter campaign seemed like the best way of getting the book directly to the fans.  I've had so much fun dreaming up the characters and watching David Alvarez bring them to life. Dave is the perfect artist to illustrate a story that has some horror and some heartbreak but is basically a lot of fun. We're also lucky to have Stephanie Buscema on board to do some covers and contribute a few gruesomely gorgeous designs.”


Wherever Hiss goes, Boo follows, tormenting him in various ways: nearly scaring him to death, possessing his body and making him do terrible and embarrassing things, and just generally making his life a living hell. The cat becomes the hunted and the ghost mouse the hunter in the twisted, comic, scary, and poignant world of BOO & HISS!

The graphic novel is currently available exclusively on Kickstarter, with distribution to its supporters slotted for May 2018. For more information on perks offered, visit the campaign page: