Welcome to this week's comic book recommendations. There's plenty of good stuff this week. DC Comics continues with some wild storylines like Wonder Woman/Conan and Dark Nights Batman: The Drowned. Marvel keeping things interesting with their 'Legacy' titles but it's Image Comics with an eclectic mix of adventure and satire that is rocking this week's batch of comics. 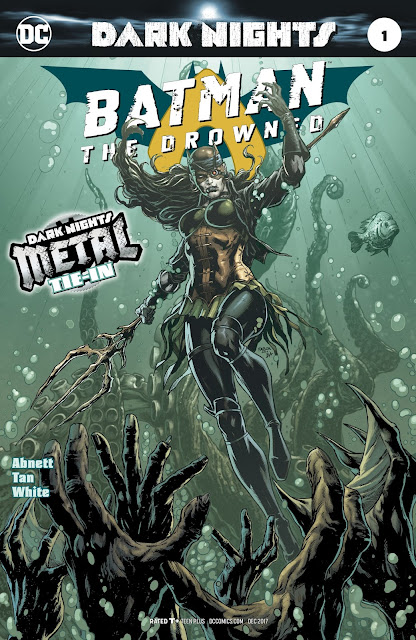 (W) Dan Abnett (A) Philip Tan (CA) Jason Fabok
As the events of DARK NIGHTS: METAL rock the DC Universe, the creatures of the Dark Multiverse stand ready to invade our world! How can even the World's Greatest Heroes stop a horde of deadly beings that appear to be powerful, nightmare versions of familiar figures? Find out in these special tie-in issues! 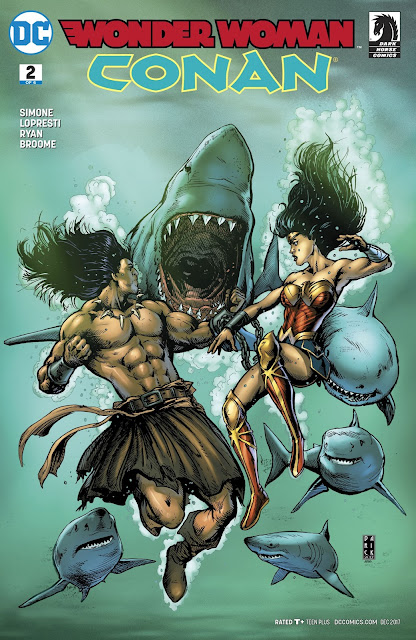 (W) Gail Simone (A) Aaron Lopresti, Matt Ryan (CA) Darick Robertson
Diana has escaped the Cimmerian gladiator's arena, but she's exchanged that battleground for an equally dire fate. Now she's chained to Conan-the warrior who refused to fight-and they've been sold to a pirate's crew! When their ship founders in a storm, a leap into shark-infested waters seems like the safest course... Co-Published with Dark Horse Comics.
RATED T+ 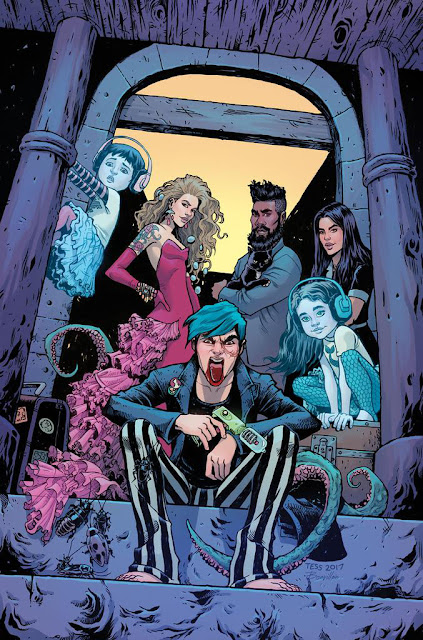 KID LOBOTOMY #1 CVR A FOWLER
IDW PUBLISHING
(W) Peter Milligan (A/CA) Tess Fowler
Kafka meets King Lear by way of Young Frankenstein in KID LOBOTOMY, a dark, demented, monthly satire that follows a dysfunctional family of hoteliers. Will sibling rivalry, seduction, and shapeshifting eventually lead to sanity or salvation?
Big Daddy is a rich hotelier who, in a cracked echo of King Lear, appoints his youngest descendant to manage The Suites, a peculiar hotel located behind the Black Crown Pub. Affectionately known as Kid, his good looks and swagger can't hide a rough childhood of strange therapies and brain operations that have awakened inner demons and psychodramas. This of course makes him eminently qualified to perform lobotomies. A failed rockstar/successful madman gets one last change to prove his worth-and regain his sanity-by turning the hotel that was once his childhood sanctuary into a lucrative business, despite a host of obstacles-including his own sister-who would love nothing more than to see him fail miserably.
Kid Lobotomy is co-created/written by Peter Milligan (Shade, the Changing Man, Brittania, Hellblazer) and illustrated by Tess Fowler (Rat Queens) with "A" covers by Fowler, a "B" cover by Frank Quitely, and a retailer incentive cover by comics superstar Frank Quitely (Jupiter's Legacy, We3)
Bullet points:
•  Grab your cockroach! Black Crown debuts here!
•  Special 23 pages of story in the first issue!
•  Letter columns, creator interviews, process pages & more!
•  Previews for upcoming Black Crown series! 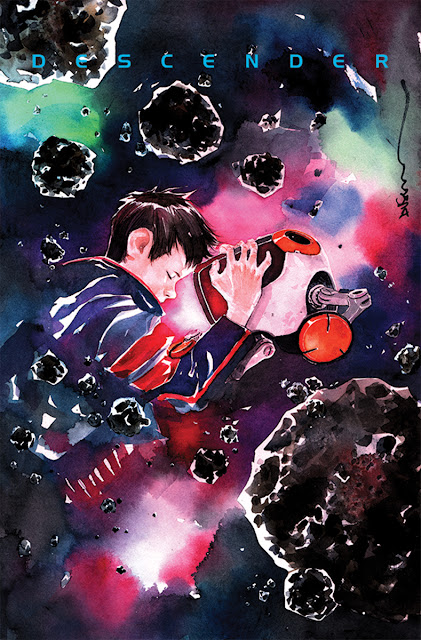 (W) Jeff Lemire (A/CA) Dustin Nguyen
"RISE OF THE ROBOTS," Part Four
The fall's big Descender event continues as Tim 21 enacts a daring escape from the Robot Resistance, but will he make it in time to save Telsa? And Andy and Bandit are betrayed by an unexpected source when they come face to face with the UGC!

Each issue in this arc will have variant covers featuring one new section of a dazzling interlocking image jam drawn by both JEFF LEMIRE and DUSTIN NGUYEN! 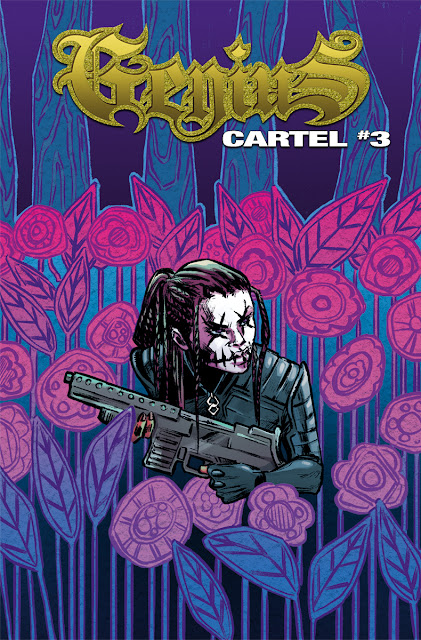 (W) Marc Bernardin, Adam Freeman (A/CA) Rosi Kampe
Ignoring orders to assassinate the leader of a drug cartel, Destiny pursues her true mission-free two dozen young girls from the cartel's sex-trade operation. With an army of mercenaries on her tail and the US border over 1,500 miles away, how will she fight her way out while protecting such fragile cargo? 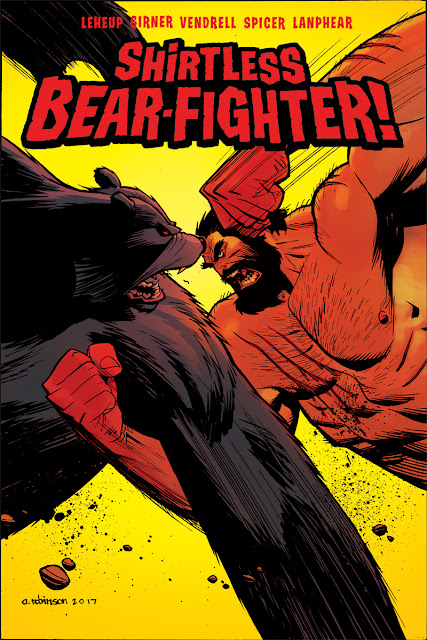 (W) Jody LeHeup, Sebastian Girner (A) Nil Vendrell (CA) Andrew Robinson
MINI-SERIES FINALE
This is it! The heart-stopping conclusion to the greatest comic saga of our time. It's Shirtless vs. Brother Bear in a bear-chested, bear-knuckled fight to the death! Being the angriest man alive has gotten Shirtless far, but can it take him all the way? 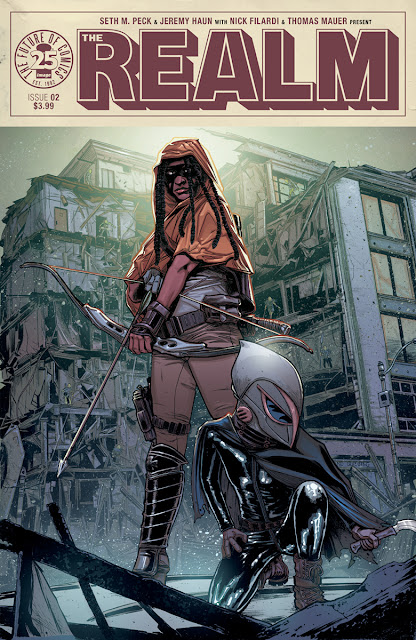 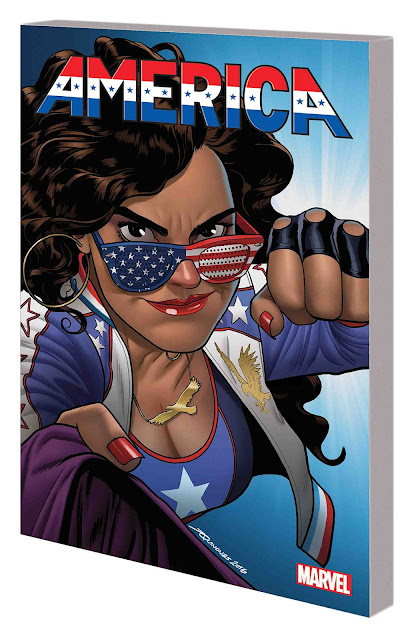 (W) Gabby Rivera, Kelly Thompson (A) Ming Doyle, Ramon Villalobos (A/CA) Joe Quinones
At last! Everyone's favorite no-nonsense powerhouse, America Chavez, gets her own series! Critically acclaimed young-adult novelist Gabby Rivera shines a solo spotlight on America's high-octane and hard-hitting adventures! She was a Young Avenger. She leads the Ultimates. And now she's going to college! Her first assignment: a field trip to the front lines of World War II - with Captain America as her wingman! But when another jump goes wrong, America Chavez ends up stuck in the past! Can that era's Storm and the X-Men help her find her way home, or are they too busy protecting a world that hates and fears them? And who is the mysterious figure behind these time-travel mishaps? Plus: America and her Young Avengers gal pal Hawkeye are reunited at last, as they team up to take on a new threat! Collecting AMERICA #1-6
Rated T+ 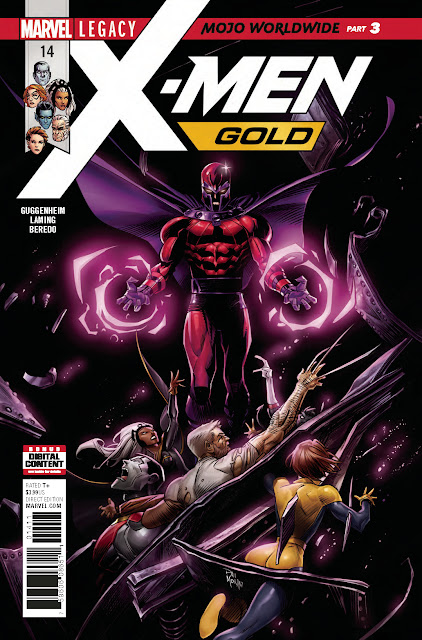 (W) Marc Guggenheim (A) Marc Laming (CA) Dan Mora
MOJO WORLDWIDE! Part 3
BROOD and DARK PHOENIX and MOJO - Oh my! The Mojoverse continues its bizarre invasion of MANHATTAN! With reality-warping resources at the tips of his gross fingers, Mojo may finally have the upper hand against our beloved mutants...
Rated T+ 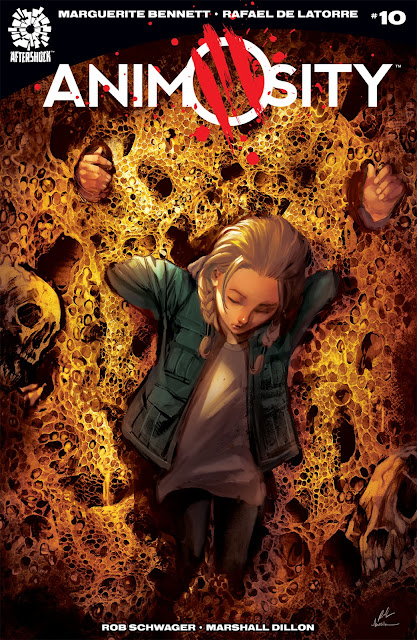 (W) Marguerite Bennett (CA) Marcelo Maiolo (A/CA) Rafael de Latorre
In the first issue of a new arc, Sandor, Jesse, and the survivors, hear rumors of a mysterious Walled City where safety may be waiting...
"The premise, the characters, and the action have me hooked." - Patrick Hayes of scifipulse.net
From the brilliant mind of creator/writer Marguerite Bennett (INSEXTS, Bombshells and Batwoman) with artwork by 2017 Russ Manning Award finalist Rafael De Latorre (SUPERZERO). 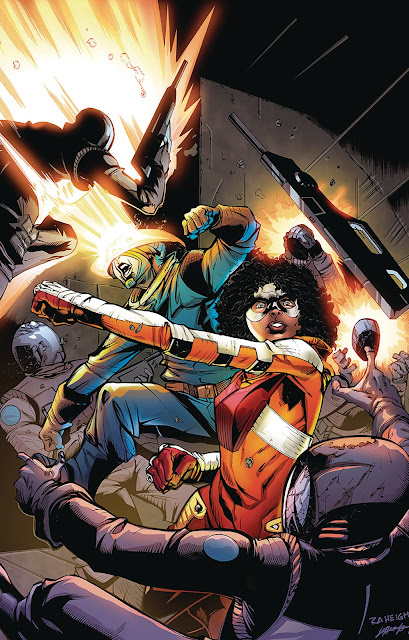 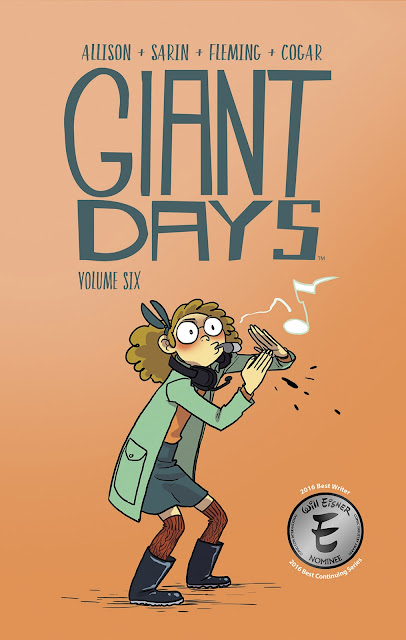 (W) John Allison (A) Max Sarin, Liz Fleming (CA) Lissa Treiman
Second year begins and Daisy, Susan, and Esther have taken their friendship commitment to the next level by moving off-campus. But the keys came with a whole new load of responsibilities. Unwanted suitor visits, a robbery, and Susan living only a few blocks apart from her ex-boyfriend, McGraw, has made the dorms feel like a haven. The girls are in for a dose of reality when they learn that there's more to being an adult than paying your own rent. 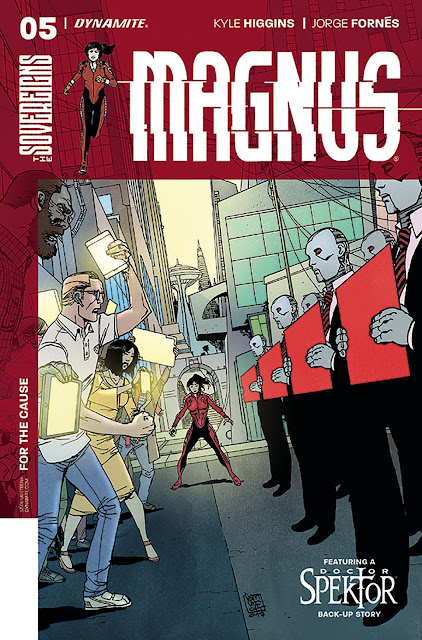 (W) Kyle Higgins, Aubrey Sitterson (A) Jorge Fornes, Dylan Burnett (CA) Giuseppe Camuncoli
Magnus tracked down the rogue artificial intelligence Frederick, but his plan to propel the conflict between man and AI into an open war is still a threat - and it's time for her to pick a side! Will Magnus be able to choose between her humanity and her moral code? She'll have to...because it's the only way she can prevent the loss of more lives!
Also: Doc Spektor, Part 9! The story of the all-new master (and we use the term lightly) sorcerer continues...the newly dumped Doc ends up picking a fight (with the help of his demonic pal Paimon) - and settles his debts with his FISTS! 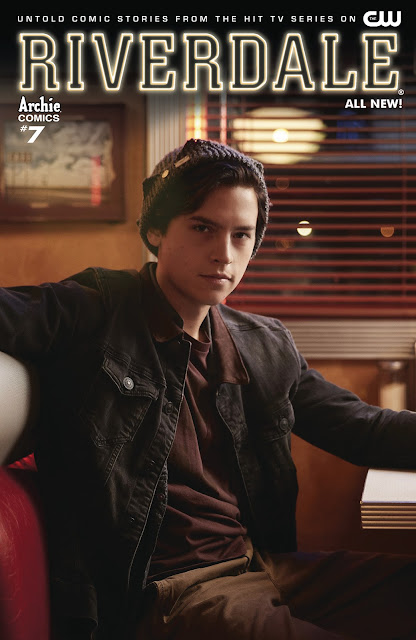 (W) Roberto Aguirre-Sacasa, Aaron Allen, Will Ewing (A) Thomas Pitilli (CA) Photo
Dilton Doiley has always been a little... borderline, but when his science teacher tells the class about an astronomical event they'll be observing, Dilton's worst fears are confirmed, the end of the world is nigh! As he takes drastic steps to prepare, Jughead is caught in a dilemma; should he humor Dilton or try to stop him? And what if Dilton's right? 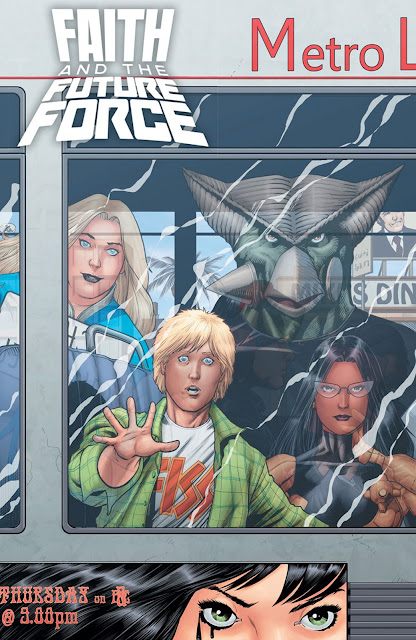 (W) Jody Houser (A) Cary Nord, Brian Thies (CA) Barry Kitson
The final countdown!
Bloodshot was a bust... Divinity didn't work... Ninjak was nixed... No matter which of the Valiant Universe's greatest heroes she recruits to her aid, Faith still can't save the time stream! With time literally running out all around her, does L.A.'s sky-soaring superhero have what it takes to defend the entire universe...or will the secret key to saving existence itself come from the most darkest and most unexplored avenue of all?
Eisner Award nominee Jody Houser (FAITH) is joined by Eisner Award-winning artist Cary Nord (X-O MANOWAR) to bring Valiant's spectacular standalone event to an unfathomable finale...and when the clock reaches zero, no amount of time travel can ever undo the damage done! 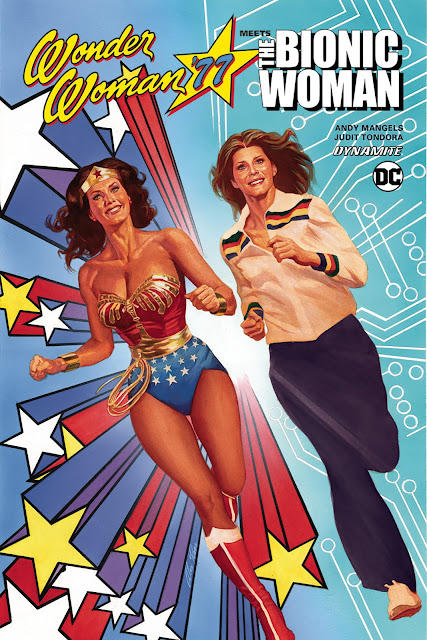 (W) Andy Mangels (A) Judit Tondora (CA) Alex Ross
Wonder Woman and the Bionic Woman, the most beloved female icons of 1970s television, come together for globe-trotting action against their worst enemies! Diana Prince and Jaime Sommers team up to fight a rogue cabal bent on wreaking havoc and stealing deadly weapons. Can CASTRA be stopped before their real targets are revealed and lives are lost? And what three familiar villains threaten the unbeatable combination of bracelets and bionics? Bestselling author Andy Mangels (Star Trek, Star Wars) and artist Judit Tondora (Grimm Fairy Tales) join forces for a celebration of the original Girl Power! 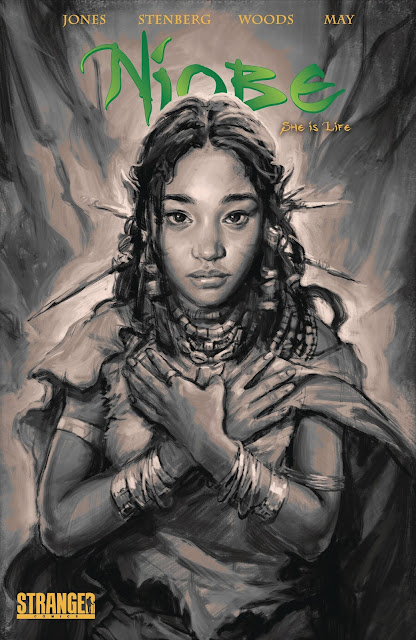 (W) Sebastian A. Jones, Amandla Stenberg (A) Ashley A. Woods (CA) Hyoung Taek Nam
Niobe, the child of prophecy first introduced in The Untamed, is on the run both from her destiny and those who would see it unfulfilled. She finds shelter among her mother's people, but when a boy is murdered it sets off a series of events that will lead to war. Collects issues #1-4 of Niobe: She is Life, the first volume in the series.