New comic day and let's not kid ourselves, everyone is out to get the new Mister Miracle (#4) from DC Comics and superteam, Tom King and Mitch Gerads. It's one of the most critically acclaimed books of the year (full disclosure: we don't receive review copies from DC so we have to take everyone else's word for it). 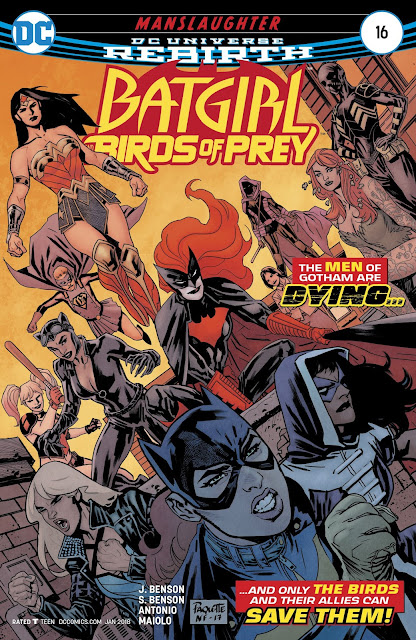 (W) Julie Benson, Shawna Benson (A) Roge Antonia (CA) Yanick Paquette
"Manslaughter" part two! As an illness that affects half of Gotham City's population grows, Batgirl, Black Canary and Huntress pick up some unexpected help from Catwoman, Ivy and Harley, as well as some welcome backup from Batwoman, Spoiler, Gotham Girl and Wonder Woman. But as the Birds of Prey grow closer to discovering the source of the outbreak, what they find won't end the plague and might only make it grow faster. 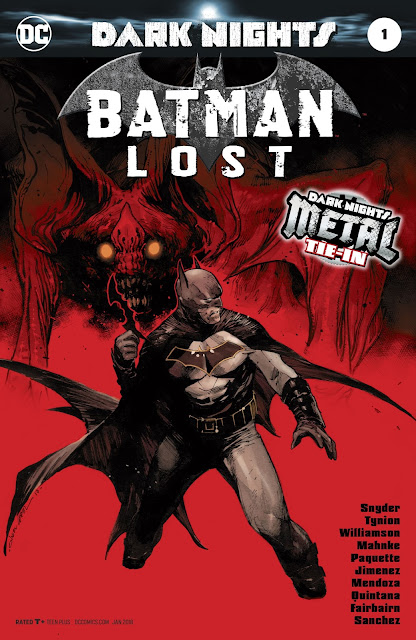 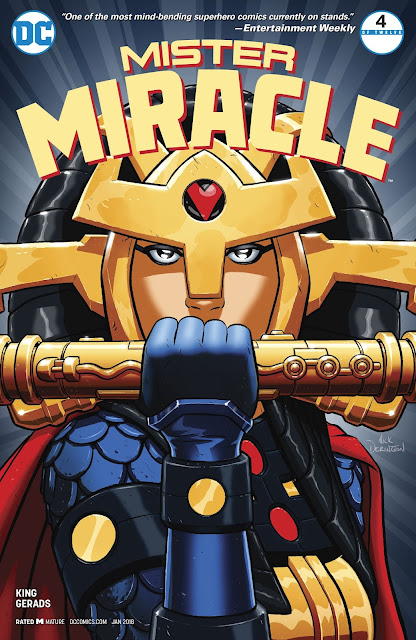 (W) Tom King (A) Mitch Gerads (CA) Nick Derington
It's the trial of Mister Miracle! Orion and Lightray are convinced that Scott has become infected with Anti-Life and is working against them to bring down New Genesis. Scott must succumb to their interrogation and physical challenges to prove he's not what they say he is...but how do you speak truth to people who don't want to believe? 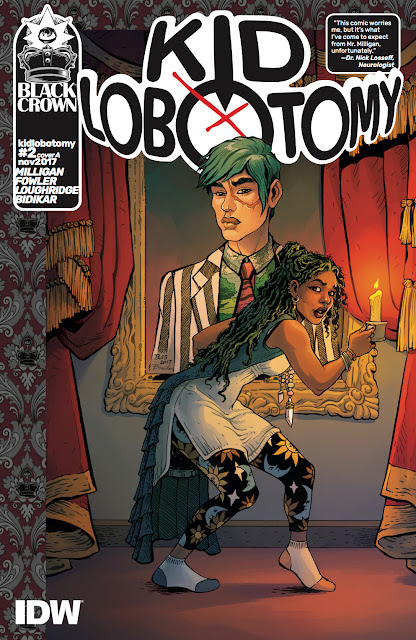 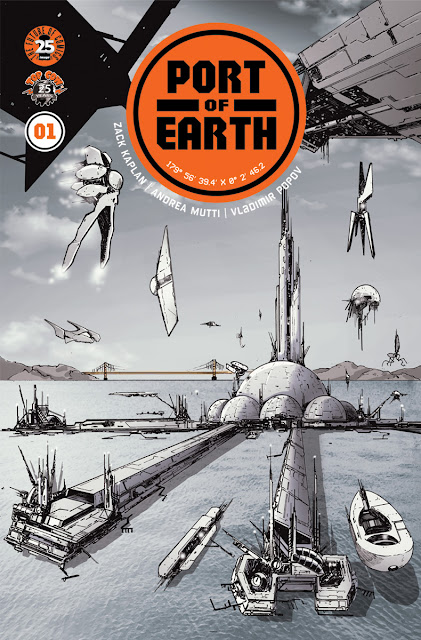 (W) Zack Kaplan (A/CA) Andrea Mutti
Imagine if aliens came to Earth not in war or peace, but with a business deal: open up a spaceport here on Earth in exchange for advanced technology. But when our alien visitors break Port restrictions and wreak havoc in our cities, it falls to the newly formed Earth Security Agents to hunt down and safely deport the dangerous rogue aliens back to the Port of Earth. A gritty sci-fi action thriller from new comic book writer ZACK KAPLAN (ECLIPSE) and ANDREA MUTTI (Rebels, Star Wars, Batman Eternal, Prometheus). 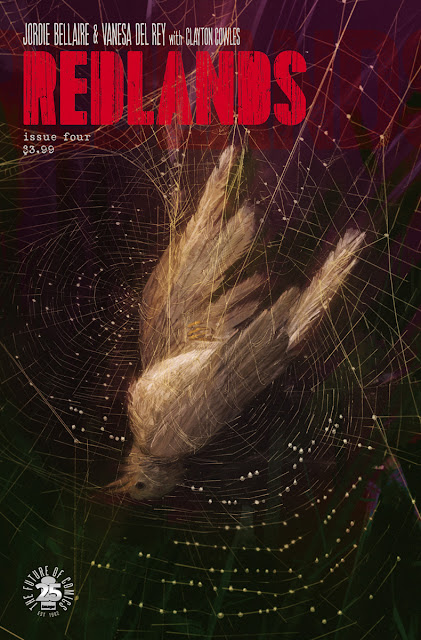 (W) Jordie Bellaire (A/CA) Vanesa Del Rey
The witches' coven has been shaken by a disturbing near-death experience, and something is brewing under the surface. There's a river in the town that leads to the darkest place, where the forgotten die alone but never forget. 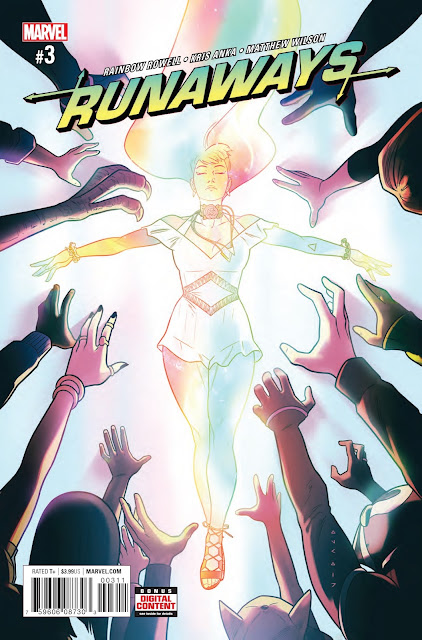 (W) Rainbow Rowell (A/CA) Kris Anka
• The Runaways' recruitment road trip stops at Pomona College, where Karolina Dean is finally happy.
•  Chase, Nico and Gert have nothing to lose: What do they have to offer the Runaway who grew up?
•  And how much do the Avengers know about what Chase is keeping in his backpack?
Rated T+ 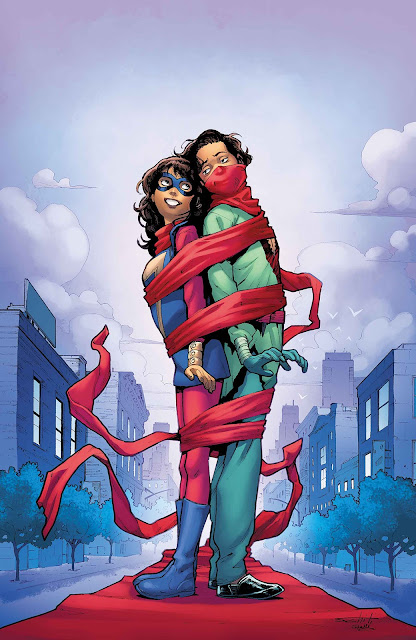 (W) G. Willow Wilson (A) Diego Olortegui (CA) Valerio Schiti
WHEN MS. MARVEL MET RED DAGGER...
•  As a runaway train barrels through New Jersey, MS. MARVEL and RED DAGGER will need to learn how to work together if they want to prevent disaster!
•  But will their shared history prove to be a stumbling block for the two heroes?
•  Sparks will fly!
Rated T+ 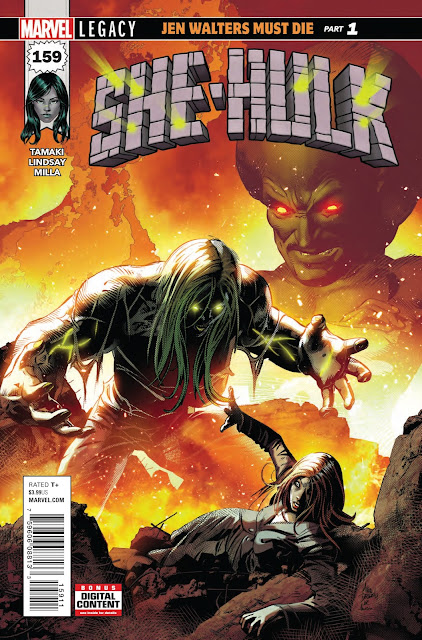 (W) Mariko Tamaki (A) Jahnoy Lindsay (CA) Mike Deodato
JEN WALTERS MUST DIE Part 1
The LEADER is back and he's using his gamma-enhanced super-intelligence to strike at She-Hulk!  But how do you hurt an almost indestructible She-Hulk?  By turning Jen against HERSELF!  PLUS: Includes 3 bonus MARVEL PRIMER PAGES!
Rated T+ 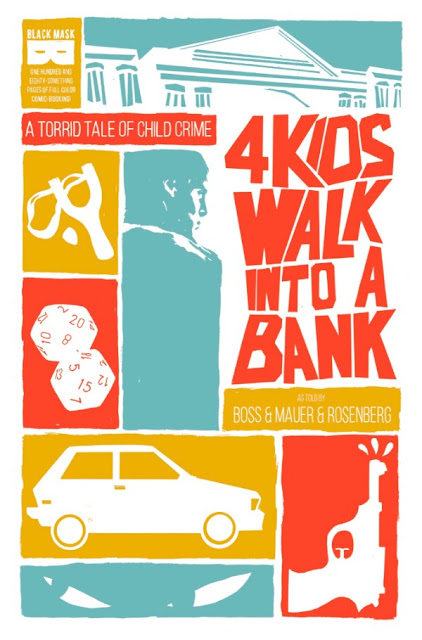 (W) Matthew Rosenberg (A/CA) Tyler Boss
4 KIDS WALK INTO A BANK is the darkly comedic story of four burgeoning child criminals and their elaborate plans.
When a group of bumbling criminals show up in her father's life looking to pull one last job, young Paige has two choices - let her father get caught up in their criminal hijinks or enlist her three best friends to do the job first. Paige picks the bad one.
180ish pages of full color comic-booking about friendship, family, growing up, and grand larceny from rising star writer Matthew Rosenberg (WE CAN NEVER GO HOME, KINGPIN, SECRET WARRIORS) and equally rising star artist Tyler Boss (LAZARUS, CALEXIT, Vice Magazine).

This vollume collects the complete series that Kieron Gilled (THE WICKED + THE DIVINE, DARTH VADER) described as "Imagine Tarantino does Goonies. And excellent." and Brian K. Vaughan (SAGA, Y THE LAST MAN) said was "Exploding with ambition and love of the medium!" 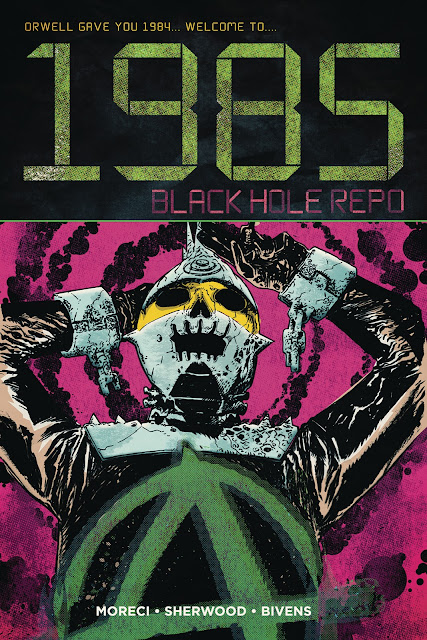 (W) Seth Sherwood, Michael Moreci (A/CA) John Bivens
Welcome to an alternate 1985 where the space race never slowed down, where the push away from Earth relies on duct tape, analog computers, and unstable solid rocket fuel. It's the worst. Max, Roach, Doc, and Bear are the dregs of the cosmos. Punks. Losers. Dropouts. They make cash repossessing the starships of deadbeats who don't make their payments. When they unknowingly jack a mysterious ship, they find themselves thrust into a conflict between the US and USSR. Targeted by American cyborg assassins, mad Soviet agents, Japanese video hackers, and every degenerate space punk bounty hunter between the Earth and Moon, their apolitical nihilistic morals are put to the test, making these losers into unlikely heroes. 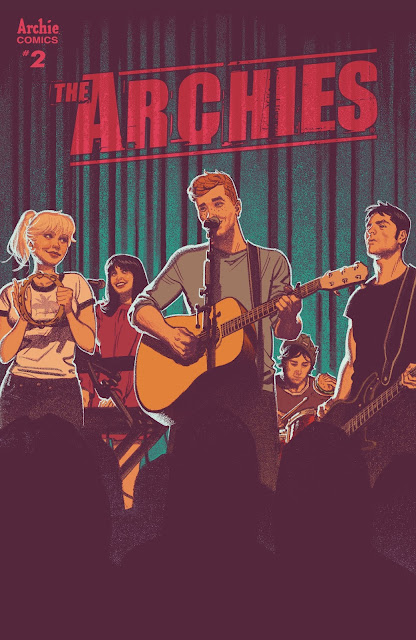 (W) Alex Segura, Matthew Rosenberg (A) Joe Eisma (CA) Greg Smallwood
New Ongoing Series! The Archies hit the road, but tour isn't all it's cracked up to be! Can they still make some great music? Or will they go broke and make a U-turn for home? 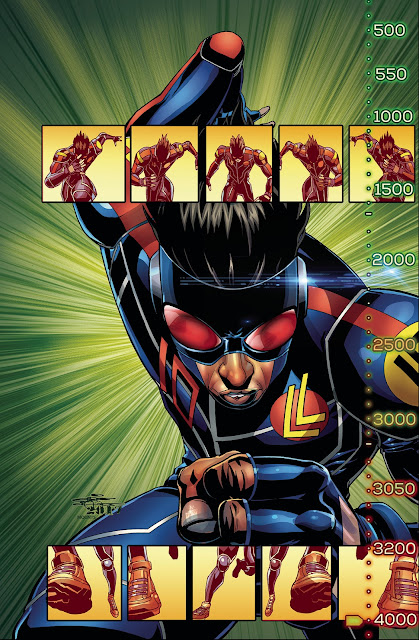 CATALYST PRIME ACCELL VOL 2 #1
LION FORGE
(W) Joe Casey (A) Damion Scott (CA) ChrisCross
New story Arc begins here! Daniel DosSantos is the speedster superhero Accell, but his recent adventures have him shaken to the core, so what's the solution? Go clubbing with the girlfriend! Too bad the supervillain Midnight Blue likes the clubs, too, and she doesn't have the patience for any superheroes who choose to step in her direction. 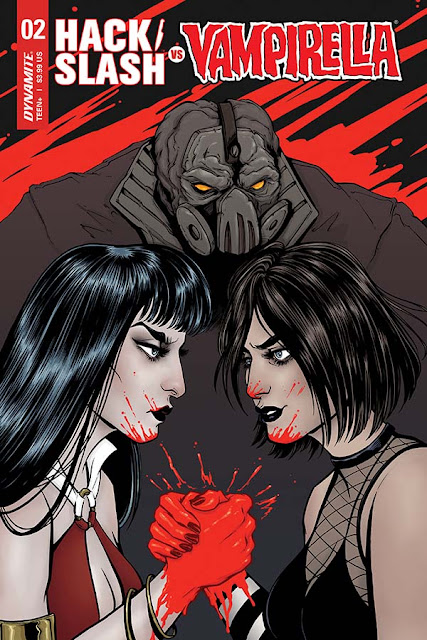 (W) Shawn Aldridge (A) Rapha Lobosco (CA) Carli Ihde
The Blood Red Queen of Hearts continues her quest to win the love of the Mad-god Chaos by sacrificing innocents. Cassie Hack and Vampirella have teamed up to put a stop to it by any means necessary. Including a good, old fashioned baseball bat beating. 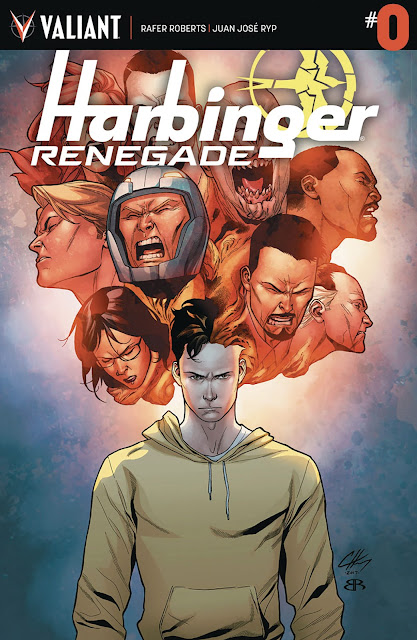 (W) Rafer Roberts (A) Juan Jose Ryp (CA) Clayton Henry
An essential prelude to HARBINGER WARS 2 - the seismic 2018 crossover event at the epicenter of the Valiant Universe!
Beneath the wreckage of the Harbinger Foundation, there is a secret that even Toyo Harada grew to fear. A secret simply known as...the Stormbringer.
And Alexander Solomon is about to set it free.
Out of the ashes of "MASSACRE," the march toward the most consequential Valiant event of all time continues with an epic revelation at the heart of the Harbinger mythos - as told by Harvey Award-nominated writer Rafer Roberts (Plastic Farm) and incendiary artist Juan José Ryp (BRITANNIA)! 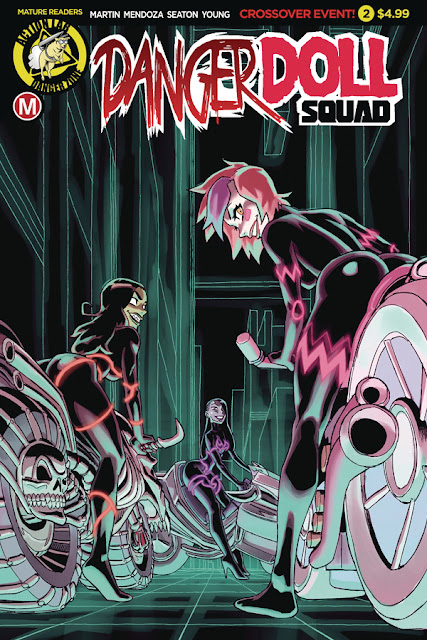 (W) Jason Martin, Dan Mendoza, Bryan Seaton (A/CA) Winston Young
Now that our Danger Dolls have their mission - saving the world by defeating the Necronomicon-powered techno virus - they must journey to the heart of the virtual "black room". But it will take everything these three dark art power girls can muster to run this necro-tech gauntlet! Features 3 covers by 3 different artists from the individual series, each with a risqué variant!