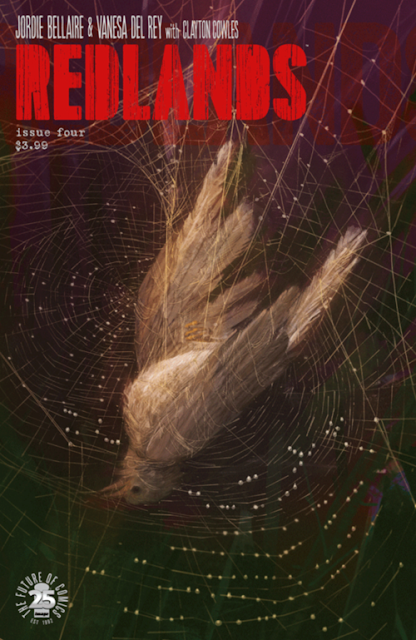 The series is virtually an anthology as each issue is connected by the daintiest of threads but it doesn't matter because each installment is a dark slice of one macabre pie. Normally, by issue four I'd have a handle on what's going on and where it's going. Happily, I don't know what the hell is going beyond the pages in front of me at any given time. It's sexy, violent, mysterious, and eerie as hell. Let me tell you what I do know.

Before we pick up with Bridget after the attack at Laurent's cabin, the issue opens with Ro reading to a child wearing sunglasses. She's reading Stephen King's Salem's Lot as a bedtime story and the child named Itsy is enthralled with the author's twisted sense of plotting. Itsy calls her mama but is she? Where did she come from as this is her first appearance? Itsy may not even be human. What the what?

Bridget didn't come away unscathed from the encounter with the serial killer in the last issue. Several stitches and a concussion later, she seemed out of sorts but resolute in helping at the police station where Alice was already helping someone. Dani was being booked for being drunk and disorderly and Alice escorted her to the drunk tank. She's someone that Alice knows apparently but Dani is another character we're seeing for the first time. The scene they share explain a lot but feels out of nowhere.

Thankfully, the dialogue is crisp and illuminating revealing their familiarity with one another among other things. One of the forgiving aspects of these seemingly random appearances is that they feel organic in this world because the dialogue is so good. While you may scratch your head at "who's this person?" the interaction draws your attention and suddenly you're more invested than you thought you'd be. Bellaire is forcing you to live in the moment, one scene at a time. By the end, you're dying to know what Bridget and Casey are up to and you're pulling for the friction between Alice and Ro to be resolved. Bellaire puts you under her spell.

Vanesa Del Rey's art style is hauntingly beautiful and paired nicely with Bellaire's colors. Eerie, atmospheric, and detailed, Del Rey creates the perfect setting for this small Florida town run by witches. The character designs are so varied especially the women who are represented in different shapes and sizes.

'Redlands' challenges your expectations and thumbs its nose at horror tropes. It's got a story to tell at its own pace and method. Don't fight it just let it wash over you. Soak in what's on the page and don't worry about arcs and narratives. The sooner you succumb to Bellaire's writing and Del Rey's visuals, the sooner you'll realize how spellbinding it all is.