Guillermo Del Toro's romantic fantasy thriller 'The Shape of Water' is proving that interspecies love can work as the film has been collected some early awards. A new international trailer has been released.

SYNOPSIS: From the master storyteller, Guillermo del Toro, comes THE SHAPE OF WATER - an other-worldly fairy tale, set against the backdrop of Cold War-era America circa 1962. In the hidden high-security government laboratory where she works, lonely Elisa (Sally Hawkins) is trapped in a life of isolation. Elisa’s life is changed forever when she and co-worker Zelda (Octavia Spencer) discover a secret classified experiment. Rounding out the cast are Michael Shannon, Richard Jenkins, Michael Stuhlbarg and Doug Jones

'The Shape of Water' tells the story of Elisa, a mute and isolated woman, who works as a cleaning lady in a hidden, high-security government laboratory in 1962 Baltimore. Her life changes forever when she discovers the lab's classified secret -- a mysterious, scaled creature from South America that lives in a water tank. As Elisa develops a unique bond with her new friend, she soon learns that its fate and very survival lies in the hands of a hostile government agent and a marine biologist.

The film has already garnered awards from the Venice Film Festival, Los Angeles Film Critics Association Awards, Palm Springs International Film Festival, and more are sure to come. It's quite the achievement for a film that mixes fantasy, romance, science fiction, and suspense. Del Toro famously loves and admires the monster movies of the past drawing inspiration that's influenced his films like 'Pan's Labyrinth' and 'Hellboy.'

Here are what the critics are saying:

"The most welcome and notable thing about The Shape of Water is its generosity of spirit, which extends beyond the central couple."
- A.O. Scott, The NYTimes

"THE SHAPE OF WATER best encapsulates the awe-inducing wonder only the best cinematic escapes can bring."
- Courtney Howard, Sassy Mama in L.A.

The Shape of Water opens Dec. 1. 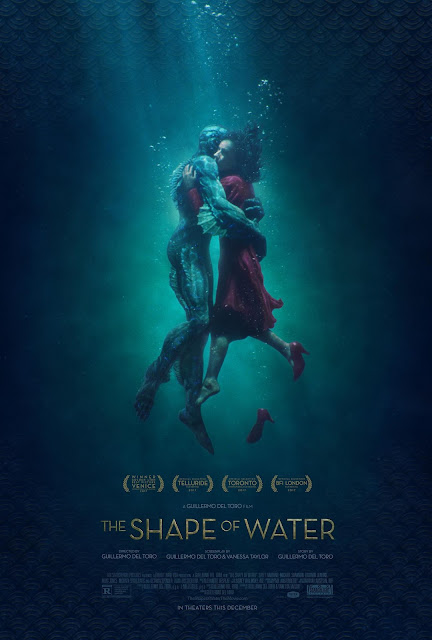