A Scarecrow Warrior God walks into a bar…and proceeds to drag a modern American city into a ten-thousand-year-old grudge-match! A bizarre new adventure-complete with boozehound shamans, monster queens, and a football-fetching hydra! 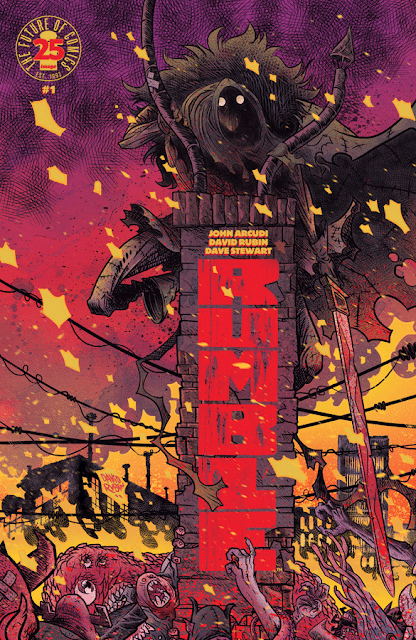 Rathraq’s battle against the immortal monsters that killed him centuries ago takes a weird turn. Gradually, this rabid warmonger loses track of who his enemy is – and the formerly reluctant, levelheaded LaRosa gets drawn into the fray against a new kind of evil! Meanwhile, Cogan the trickster God plays both sides against each other – which has its own dangers. A strange, blood-spattered, unpredictable tale of anger and love that takes you from filthy city sewers to a prehistoric paradise where fantastic beasts and Gods fight over the birth of Humankind.

With new artist David Rubin of Ether, Fiction, Black Hammer and Power Rangers taking over from James Harren. In a new storyline, Soul Without Pity, Rathraq is back! But who is he, exactly? Once an ancient warrior god, he was resurrected as a sword-wielding scarecrow. And now, Rathraq has transformed yet again-or has he?

Its fairly hard to describe a preview comic that’s hard to define and explain, and also hard to know where to start so I placed a prelude by Image Comics to describe it, it’s (*long breath*) in a few words essentially a legendary warrior who had though mythical creatures far and wide to save the human race from extinction many millennia ago during the early ages of Earth, however as the first pages of the comic describes, Rathraq the greatest of them along with other warrior gods but that was one of the many start of the battles tp fight these horrid looking creatures however one day he heads back to the Queens lair of monsters for a peace truce as the old guy by the campfire explains that since then he had never seen again and so forth we follow on the comic where he returns as a Scarecrow Warrior God in which the story picks up in this reskinned version of Rumble.

The first impression is that this comic is definitely of the very arty graffiti style aimed for the slightly far out readers with a wildly imaginative mind. You notice straight away that the drawings are either very hazy dotty depicting in contrast to the forefront of bright dark lined creatures than to the smoggy murky outdoor street scenes with more of the same “street art” dark defined etched style drawn by artist David Rubin. I really like it and when you view it closely it certainly is striking in its resemblance especially to the character drawings.

For me the storyline is a tad confusing to follow from writer John Arcudi, maybe it helps with a dose of reading the 2014 version that you can understand more of the gist of what its about but it does bring into the light. We are kind of placed into the shoes of two characters Cogan, an old bearded man and a shape-shifting alien creature Otis who bumped into each to reinvigorate the memories of Rathraq, where Cogan explains the legendary story. We then switched to another story, a bald burly guy called Del who worships Rathraq who is heartbroken of his nonexistence since he had befriended him and his two friends who worry for him where he finds an unexpected conclusion.