Vampirella continues to blaze a new trail in Jeremy Whitley's Mad Max-inspired new adventure where people can't die, the hero has overslept a thousand years, and love is in the air. 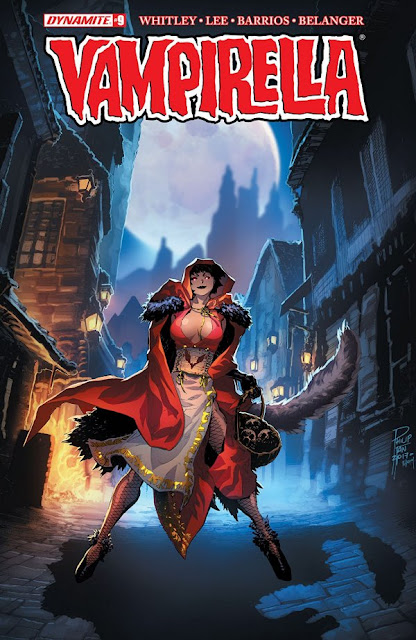 In arguably one of Vampirella's wildest adventures yet, she has to restore death to the people after defeating Lucifer while God was missing rendering souls with nowhere to go. On the run with her non-girlfriend girlfriend Vicki, Vampirella searches for a way to heal an open wound and try to fix the mess she's made and survive an angry boss and his minions.

This issue offers a lot of bloody good action and surprising romance. The Fury Road Vamp and Vicki find themselves on is every bit as exciting and savage as the film that inspired it. The art team of Andy Belanger, Crees Lee, Paulo Barrios, and Lee Roughridge create a fast-paced multi-angled visual feast with some stunning splash pages. It's all captured using a limited color palette using yellows and browns to accentuate the dusty desert locales. And as brutal as the action can be the art is equally tender and romantic when Vamp and Vicki finally make their feelings known to each other.

Issue #8 featured a lot of dialogue and exposition from Vampirella, more so than we've seen in recent story arcs, creating a new much more candid and chatty character. Her train of thought continues letting us in on her every emotion and insecurity. She's funny and thoughtful which really helps to understand her feelings toward Vicki and when they finally consummate their relationship it feels natural and loving. There are also some funny quips about their sexy time too. It's all beautifully conveyed with the art as well as with words.

'Vampirella' is a mash-up of fun using horror, action, dystopian sci-fi, romance, and comedy. It's a crazy violent road trip story with a sweet tender heart in the center. This is probably the most uninhibited Vampirella we've seen in a long time and the comic is better for it. Vampirella can be a fierce machine gun-toting winged monster in one scene and a caring sensual lover in the next. She's multi-dimensional and never boring. Jeremy Whitley and Andy Belanger have found a sweet, sexy, and sensational recipe for success that shouldn't be missed.