It's NEW COMIC BOOK DAY and as usual there is something for everyone. There's mature titles like MISTER MIRACLE and newcomer OLD MAN HAWKEYE. If you're looking for all-ages titles then you can enjoy MECH CADET YU and THE ARCHIES.Teens and up have some great action and suspense books like POSTAL, SECRET WARRIORS, NINJAK VS THE VALIANT UNIVERSE, MICHAEL CRAY, PORT OF EARTH or WITCHBLADE. You can't lose this week. Happy reading! 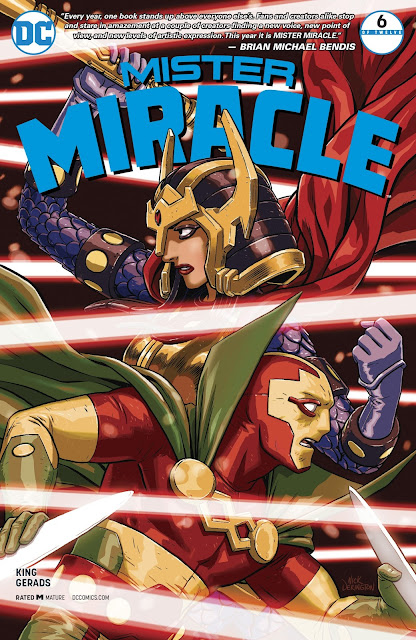 (W) Tom King (A) Mitch Gerads (CA) Nick Derington
The hit miniseries reaches the emotional conclusion of its first arc! Scott Free returns to New Genesis to face his punishment but instead finds the whole world has been flipped upside down. Mister Miracle and Big Barda battle their way through monsters and New Gods to get to the Highfather, but once they reach Orion's throne room, they learn that the war against Darkseid has taken a bloody turn.
MATURE READERS 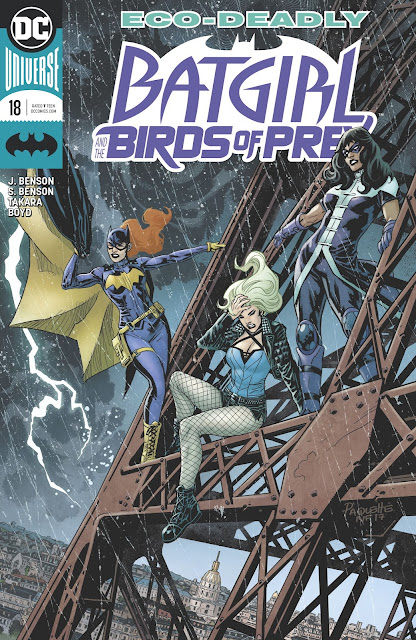 (W) Julie Benson, Shawna Benson (A) Marcio Takara (CA) Yanick Paquette
"Eco-Deadly!" Tasked with a new mission by the secretive Spyral, Huntress enlists Batgirl and Black Canary to help infiltrate an exclusive tech conference. Searching for an arms dealer masquerading as a tech investor, the Birds of Prey must uncover the mysterious plans for Weather Wizard's missing wand before the City of Lights finds itself plunged into permanent darkness.
RATED T 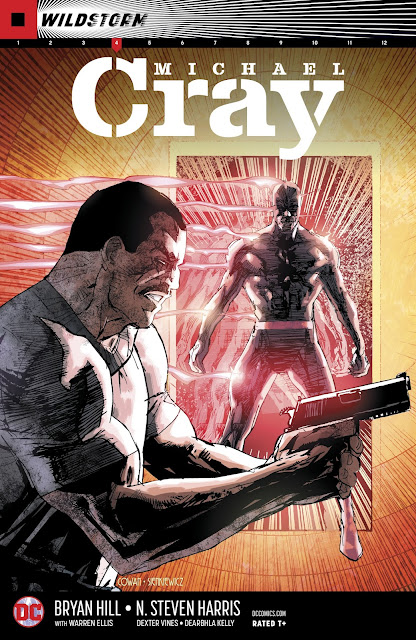 (W) Bryan Hill (A) N. Steven Harris, Dexter Vines (CA) Denys Cowan, Bill Sienkiewicz
With a plan in place, Michael Cray and his team have made an attempt to befriend the psychotic Barry Allen in order to bring him down and bring his murders to an end. But with
a paranoid conspiracy theorist like Barry Allen, does Cray have the upper hand, or is he walking into a trap?
RATED T+ 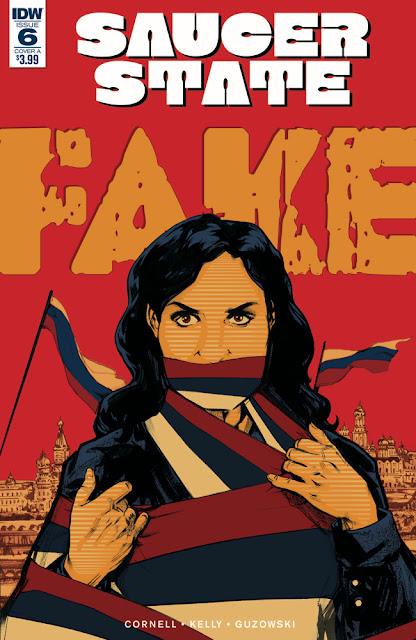 (W) Paul Cornell (A/CA) Ryan Kelly
Kidd and Chloe are lost in Hollywood and... under fire?! Astelle has been alien abducted... by Isis?! The WW2 origins of the UFO myth are... fake news?! And of course, of course, of course, President Arcadia Alvarado is in Moscow, the axis of the story, the axis of recent history, for the season finale of... the human race?

Bullet points:
* Picks up where Saucer Country left off!
* One of the very few mainstream comics to be nominated for SF's prestigious Hugo Award!
* Tackles real world US politics from the point of view of a female President! 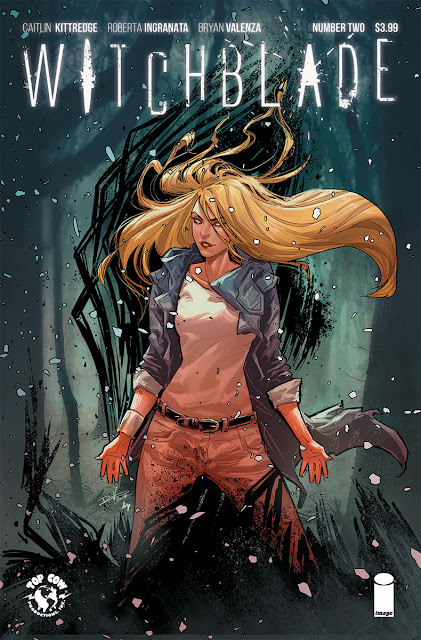 (W) Caitlin Kittredge (A/CA) Roberta Ingranata
"LIFE AFTER," Part Two
Struggling to adapt to her new life as the Witchblade's host, Alex finds she's the prime suspect in the death of an NYPD detective-and that the dead cop had powerful and corrupt friends who will do anything to keep his shady business quiet. But in the world of the Witchblade, nothing is quite what it seems, and Alex soon learns that there's more than greed and graft at play inside the circle of corruption. The bent cops also have a supernatural backer, and Alex has just landed in his crosshairs. 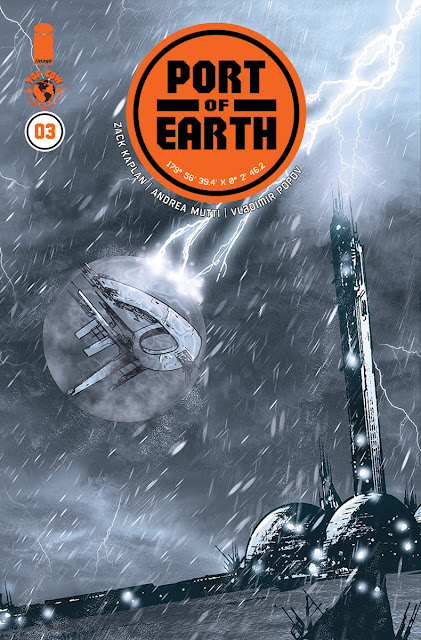 (W) Zack Kaplan (A/CA) Andrea Mutti
A deadly alien has broken travel restrictions and killed an innocent person on the California coast. While ESA Agent Rice is committed to following protocols and peacefully deporting our dangerous visitor back to Port, his partner McIntyre is determined to use lethal force regardless of the situation. Will these two agents be able to overcome their differences, avoid a galactic incident, and safely return the alien to the Port of Earth? 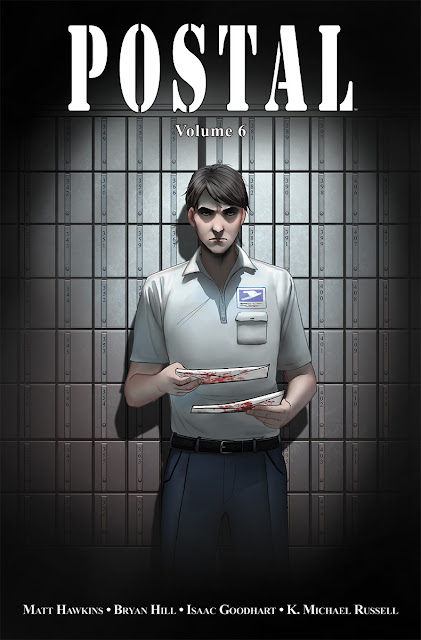 (W) Bryan Hill (A/CA) Isaac Goodhart
Isaac Shiffron has found his tool of revenge against Laura and the town that betrayed him: The FBI. Agent Bremble is Isaac's willing tool, seeking to punish both Eden and the corrupt FBI agents that protect it. In order to protect their town, Laura, Mark, Maggie, and Molly have to work together...because Bremble's strike team is headed their way, and the end of Eden is coming with it. 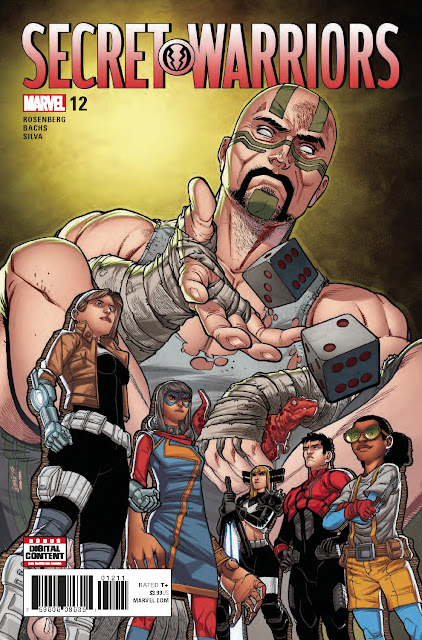 (W) Matthew Rosenberg (A) Will Robson (A/CA) Javi Garron
VERSUS MISTER SINISTER PART 5
•  THE FATE OF THE SECRET WARRIORS WILL BE DECIDED...
•  ...by a roll of the dice!
•  Clandestine meetings predicated on lies! Teammates-turned-enemies brought face-to-face! A hero will break all the rules - but will it be enough to win?
Rated T+ 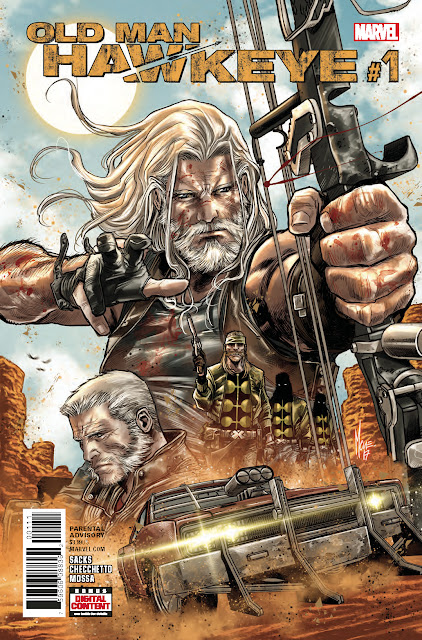 (W) Sacks, Ethan (A/CA) Marco Checchetto
AN EYE FOR AN EYE Part 1
The super heroes have fallen.  The country has been divided into territories controlled by super villains.  Among the wastelands lives CLINT BARTON - one of the few Avengers to survive.  But it's been 45 years, and he's no Avenger.  Trying to eke out a living anyway he can, the former HAWKEYE is confronted with a startling discovery:  the sharpshooter is going blind.  With time running short, Clint realizes there's one last thing he wants to see: revenge for his fallen comrades-in-arms.
Rising-star writer ETHAN SACKS and superstar artist MARCO CHECCHETTO take you back to the Wastelands in a story set five years before the original classic OLD MAN LOGAN.
Rated Parental Advisory 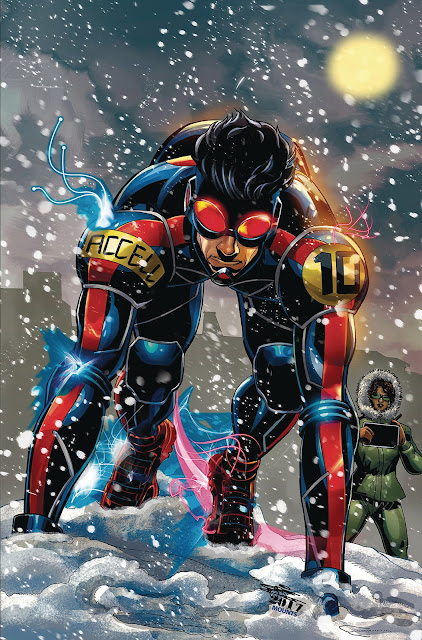 (W) Joe Casey (A) Damion Scott (CA) ChrisCross
After taking a beating from the mercenary Midnight Blue, Accell's life as a super speedster is fractured between science and mysticism. An old friend returns from the spirit realm to guide Accell on the right path, while scientist Althea Morrison works with the hero to figure out just how fast he can go. The world's first public superhero is about to have his perceptions of life torn apart at breakneck speed. 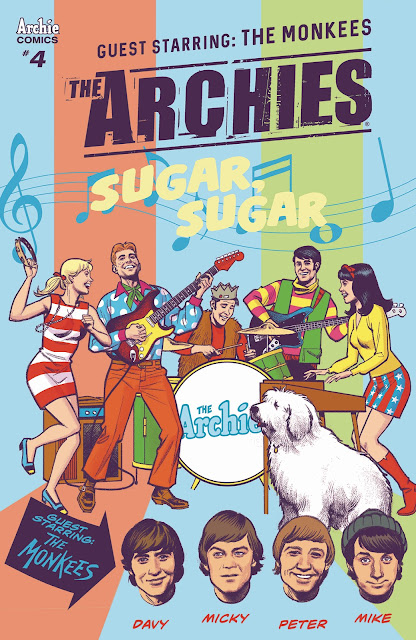 (W) Alex Segura, Matthew Rosenberg (A) Joe Eisma (CA) Greg Smallwood
NEW ONGOING SERIES! GUEST STARRING THE MONKEES! Still soaring from last issue's sage advice from CHVRCHES, Archie is eager to take his friends to the next level musically on their first-ever tour. But an unexpected turn of events finds them in the swingin' sixties-face to face with rock/pop icons THE MONKEES! 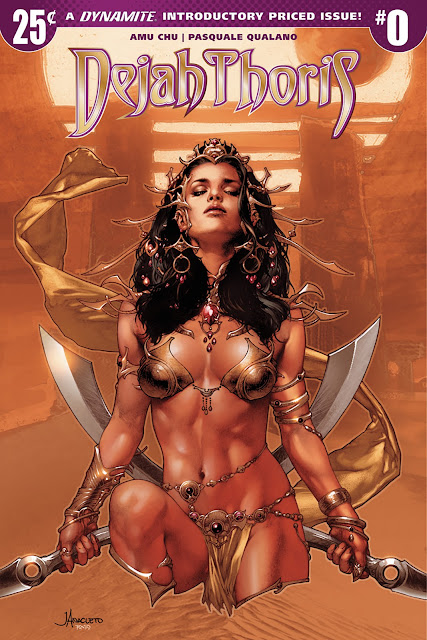 (W) Amy Chu (A) Pasquale Qualano (CA) Jay Anacleto
The untold story of the Red Martian princess!  After learning of the legendary Gardens of Mars from her grandfather, Dejah Thoris, Princess of Helium, sets off on a dangerous scientific expedition to save her dying planet. But things don't go the way she planned when she encounters a mysterious Green Martian prisoner...  A prequel to Edgar Rice Burroughs' beloved book A Princess of Mars. 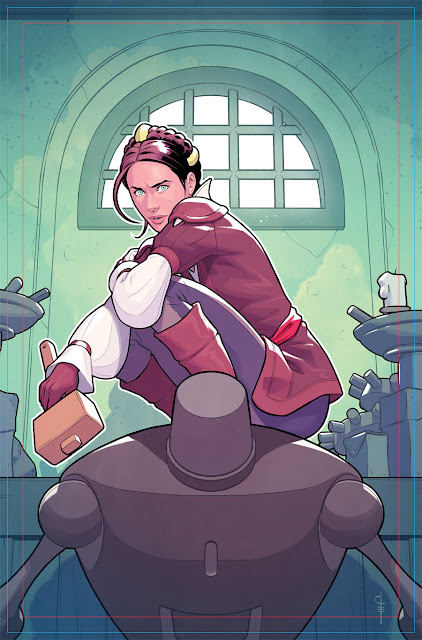 (W) Paul Allor (A/CA) Chris Evenhuis
In a city under siege, Leonardo da Vinci sends Isabel and the machine on a dangerous mission. But in the thick of battle, the machine starts to exhibit strange behavior, leaving Isabel to wonder if it's gaining consciousness at the worst possible moment. 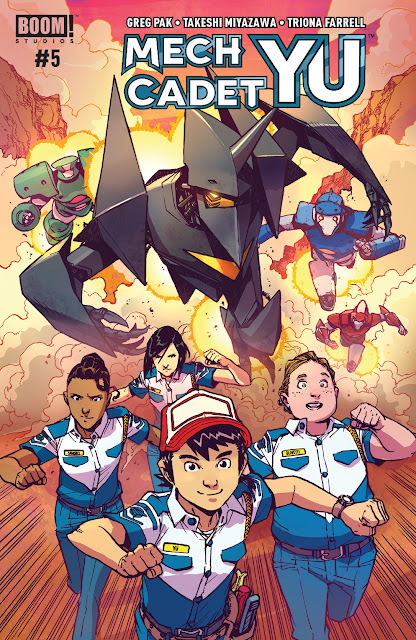 (W) Greg Pak (A/CA) Takeshi Miyazawa
After the Sharg's violent return, the Sky Corps Central Command scrambles to deal with the crisis but not before grounding Stanford, Park, and the others. The cadets continue to train under Skip in secret but it's not long before the Sharg strike again-this time, in a form mankind has never seen before. 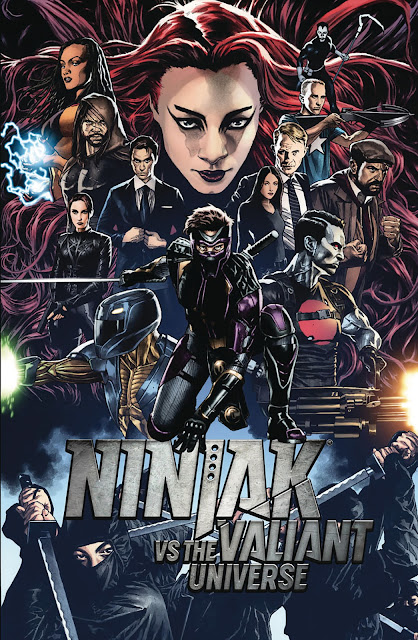 (W) Eliot Rahal (A) Joe Bennett (CA) Mico Suayan
A FIRST-OF-ITS-KIND COMIC BOOK EXPERIENCE! Watch the upcoming live-action digital promotion coming this winter - then jump headlong into the fight-fueled showdown of the century as acclaimed writer Eliot Rahal (The Doorman) and red-hot artist Joe Bennett (Teen Titans,
Deathstroke) as they reveal the full scope and adrenaline-drenched intensity of...
NINJAK VS. THE VALIANT UNIVERSE! Colin King is Ninjak, MI-6's deadliest intelligence operative and weapons expert. When the ruthless assassin Roku exploits his greatest weakness, Ninjak will be forced to betray his closest allies. Now, on the run, he must face off against the most powerful heroes known to man for a high-octane, take-no-prisoners trial by fire more perilous and more unpredictable than any he's faced before. In 2018, the world's most dangerous super-spy goes to war with the Valiant Universe...
Guest-starring X-O Manowar, Bloodshot, Livewire, Archer & Armstrong, Shadowman, and many more, don't miss the ULTIMATE JUMPING-ON POINT for the most acclaimed and hotly followed publisher anywhere in comics today as Ninjak leads an all-star introduction to the most brutal fighters the Valiant Universe has to offer!


Previews by Enrique Rea, Courtesy of their respective publishers