This week in comics is filled with big action comics. The BLACK LIGHTNING collection, DARK NIGHTS METAL, ETERNAL, SILENCER, HACK/SLASH RESURRECTION, VIOLENT LOVE, and more feature death-defying action. If you're looking for some horror check out REACTOR and ANIMOSITY along with HACK/SLASH. If you're looking for a smorgasbord of stories see BLACK CROWN QUARTERLY. For some ground-breaking comics BLACK [AF] AMERICA'S SWEETHEART is a must-buy. See this week's recommendations and happy reading. 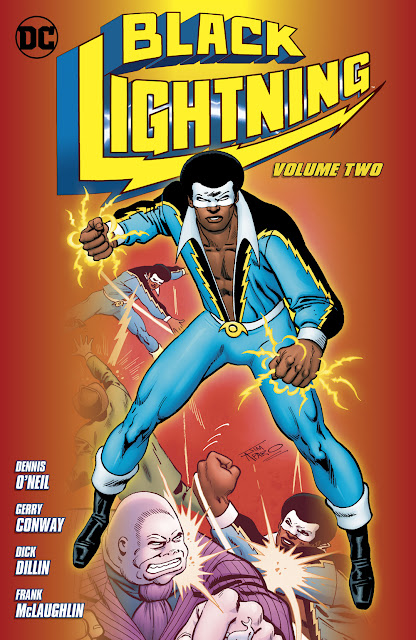 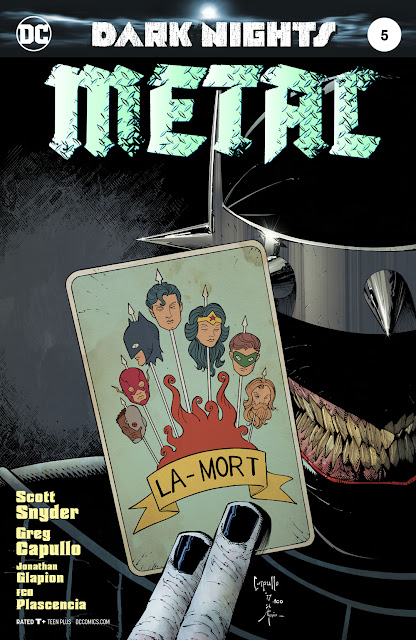 (W) Scott Snyder (A/CA) Greg Capullo, Jonathan Glapion
The Justice League faces the final extinguishing of our world, invaded on all sides by unimaginable nightmares, fueled on to the edge of oblivion only by the belief that there must be a light in the endless darkness-somewhere. But...what if there's not?
FOIL-STAMPED, EMBOSSED COVER
RATED T+ 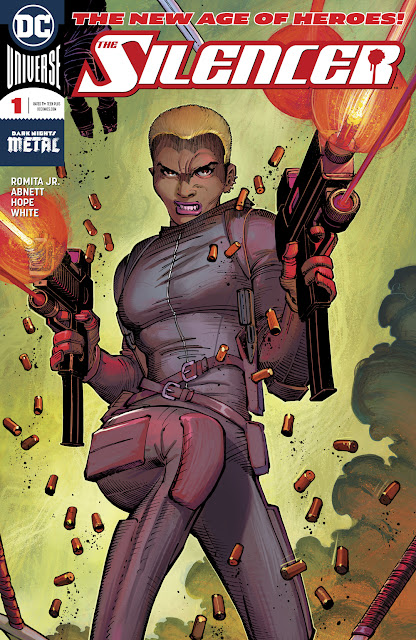 (W) Dan Abnett (A/CA) Sandra Hope, John Romita
"CODE OF HONOR" part one! She's one of the DC Universe's deadliest assassins...and you've never heard of her. Super-strong, highly trained, armed with devastating and stealthy meta-human abilities, the Silencer is virtually invincible. Or at least she was. After decades as Leviathan's chief assassin, Honor Guest put in her time and managed to get out with her skin intact. Now she lives a normal life with a normal family in a normal house on a normal street. But the past has come back to haunt her in the form of her old employer and a deadly new mission...and Talia Al Ghul won't take no for an answer.
RATED T+ 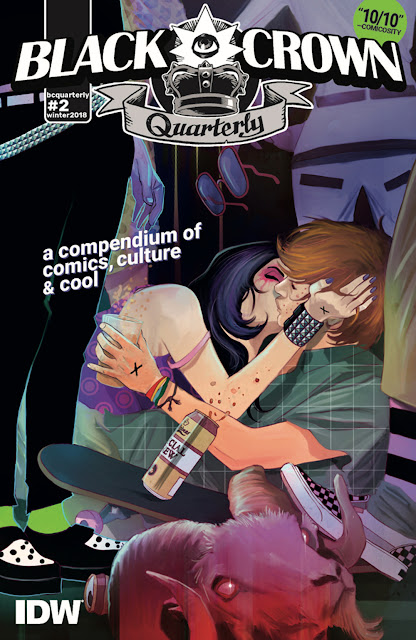 It's the new Winter's Edge of Comics Cool in 48 pages! Delight in regular continuing features like legit publications with literary pedigrees! It all begins with the 10-page regular lead feature Tales From the Black Crown Pub, starring Stacey the barmaid, by award-winner Rob Davis (The Motherless Oven). Recurring short features include Canonball Comics: an exquisite corpse that will not stay dead, Cud: Rich and Strange by co-writers/bandmates Will Potter and Carl Puttnam and artist Philip Bond, Swell Maps by music journalist/novelist Cathi Unsworth with illustrations by Cara McGee and a new Hey, Amateur!.

Plus: Previews of your future favorite comics like Bandtwits by Jamie Coe, Punks Not Dead by David Barnett and Martin Simmonds, a Walking Ghost Tour of Canon Street by Tini Howard, interviews with your favorite comics celebrities and much, much more! 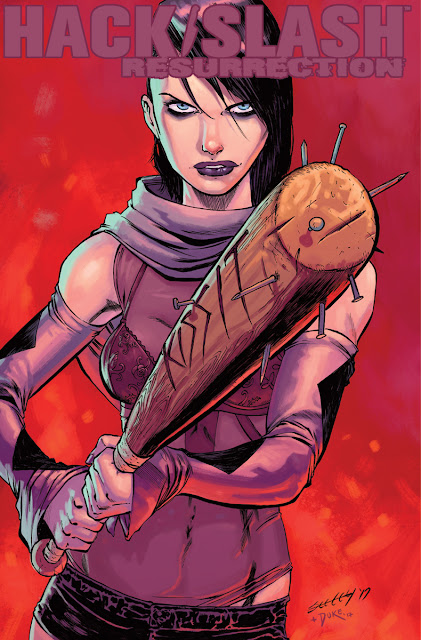 (W) Tini Howard (A) Celor (CA) Tim Seeley
Cassie feels betrayed. Okay, not feels betrayed, is betrayed. So she's gonna put on a cute new outfit and take herself out dancing. Do, re, mi, motherf*cker. 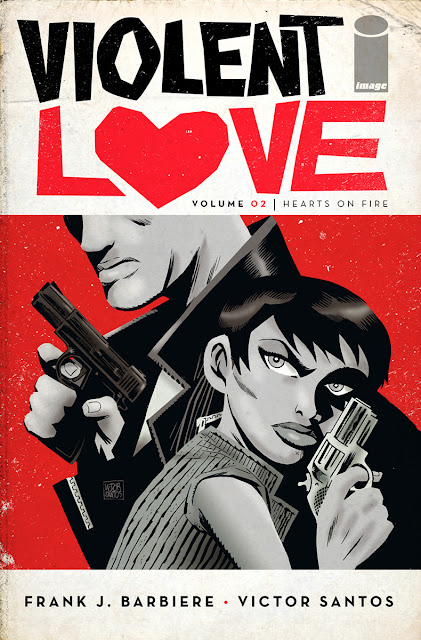 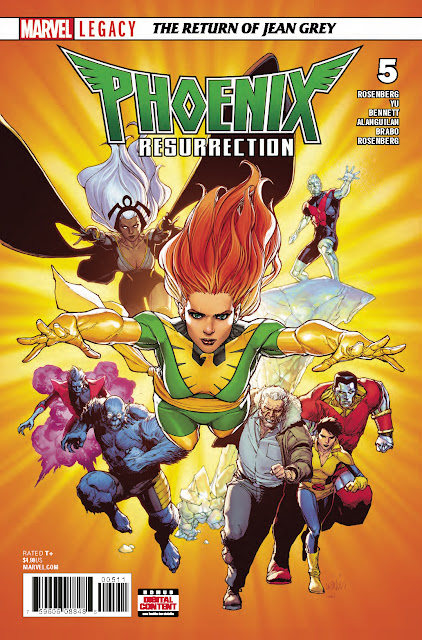 (W) Matthew Rosenberg (A) Khoi Pham (CA) Leinil Francis Yu
A light in the darkness is not always welcome.
Kitty Pryde, Old Man Logan and Cyclops are leading teams of X-Men all across the globe, chasing events connected to the Phoenix. But with teammates disappearing and familiar enemies returning, the X-Men are fighting a losing battle. Beast doesn't know how or what shape it will take, but he knows they are running out of time before the Phoenix makes its true presence known.
Meanwhile, a young woman named Jean is starting to go insane in her peaceful, suburban life. Nightmares and daydreams are spilling over into the world and revealing cracks in her reality. Jean's life and everything in it may just be a facade, but made by who? And why?
Jean needs to escape. The X-Men need to stop the cycle of death the Phoenix brings. Their worlds will violently collide as Jean searches for an opening and the X-Men fight for closure. But when they are brought together, will the X-Men be reunited with their long-lost teammate - or something darker?
Rated T+ 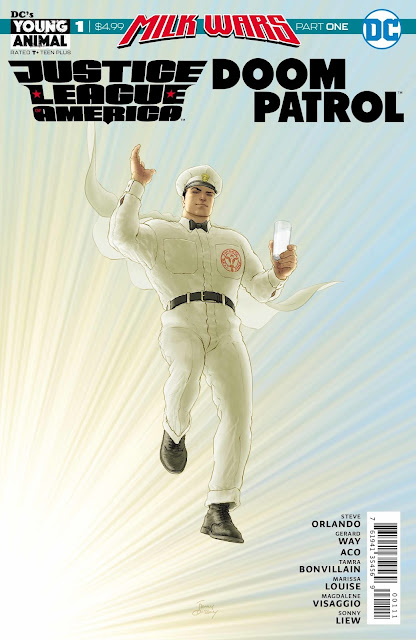 (W) Steve Orlando, Gerard Way, Magdalene Visaggio (A) Aco, Sonny Liew (CA) Frank Quitely
"MILK WARS" part one! Welcome to the un-event of the year! Kicking off a line-wide adventure, DC's Young Animal collides with the DC Universe to bring you a different kind of crossover. The Doom Patrol has discovered that an interdimensional corporation called RetCo has been stealing stories, reconfiguring them and repackaging them for new markets. Our gang of misfit heroes have felt the touch of this nefarious company, and it has already started to change them. Even scarier, though, is how deeply RetCo has embedded itself into current continuity, using the radioactive milk of psychic cows to quell the more dangerous impulses of the Justice League and turn them into heroes safe for the masses. And to kick this off, RetCo has gone all the way to the top. Meet Milkman Man, heretofore unknown final son of Krypton, who was sent to our planet to save him from the destruction of his homeworld, only to be adopted by an evil dairy farmer and raised to love all things dairy! Co-plotted by Steve Orlando and Gerard Way, with art by ACO (MIDNIGHTER), this extra-sized special starts "Milk Wars" with a splash! Plus, who is Eternity Girl, and how does she connect to this whole scheme? A special four-part back-up feature by Magdalene Visaggio (Kim and Kim) and Sonny Liew (The Art of Charlie Chan Hock Chye) begins here. 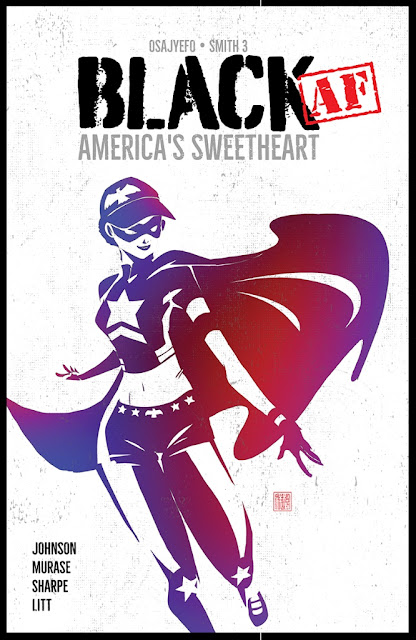 (W) Kwanza Osajyefo (A) Jennifer Johnson (CA) Sho Murase
Can a black woman be America's first superhero?
Eli Franklin is a 15-year-old girl living in rural Montana-and she just happens to be the most powerful person on the planet. In the aftermath of the world learning that only black people have superpowers, Eli makes her debut as the superhero Good Girl, on a mission to help people and quell the fear of empowered blacks. When a super-terrorist threatens to take away everything Eli has worked toward, will donning a patriotic costume be enough for her to find acceptance?
America's Sweetheart expands BLACK into a universe of heroes. 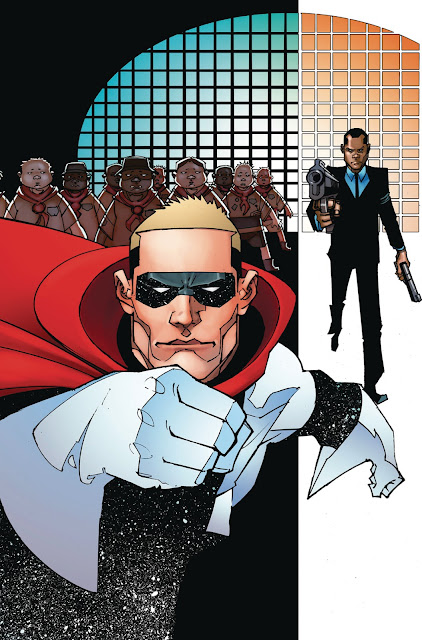 (W) Joe Casey (A/CA) Jefte Palo
Clarence Coal, the world's greatest hunter, has been hired by the Foresight Corporation to locate Alistair Meath, the superhero called KINO. Agent Gilmour from Britain's MI6 is on Kino's tail as well, but the superhero is having strange problems of his own, fighting a group of enhanced children who want to tear him apart, limb from limb. Paths converge as the secrets behind Kino's new life as a superhero begin to unravel. 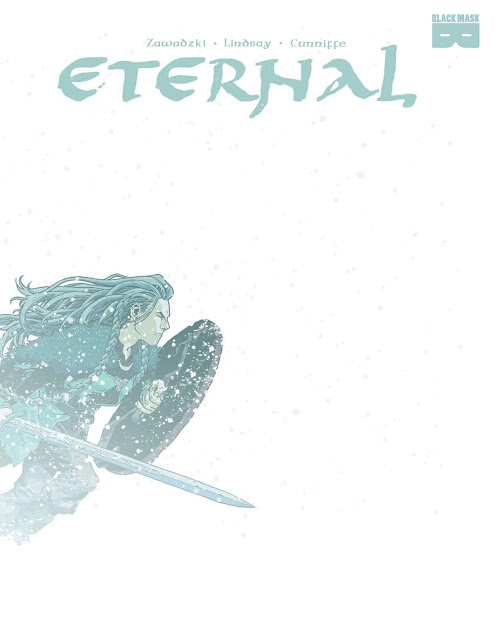 (W) Eric Zawadzki, Ryan Lindsay (A) Eric Zawadzki
A group of isolated shieldmaidens protect their village against a tide of men who think they can take their land land from them. Vif takes her band of women off viking to quell the advances of a loitering mystical scumbag, Bjarte. But some battles rage on inside us long after the field is empty, and some opponents won't ever stay down. Eternal is a haunting story of how vulnerable you make yourself when trying to protect everything around you.

This oversized bande dessinee graphic novella is a love letter to brutal violence and eternal emotions. With hyperdetailed art and gorgeous fluid motion from artist Eric Zawadzki [hot off THE DREGS], this story will be one of the most beautiful and heartbreaking things you will read this year. Written by Ryan K Lindsay, known for marrying emotion to genre in BEAUTIFUL CANVAS and the award winning NEGATIVE SPACE, this self-contained story is aimed to be a boutique item for your shelves, and a gateway gift to others you know and love. 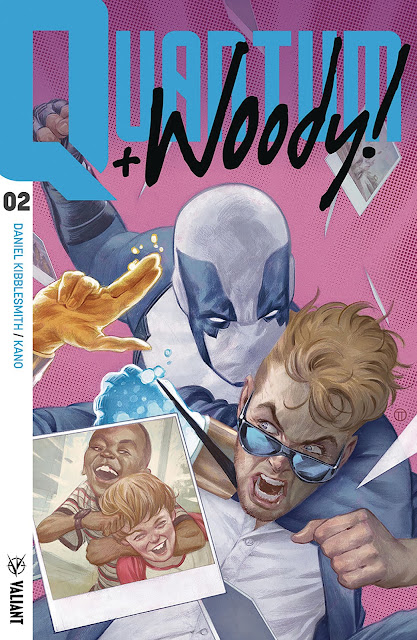 (W) Daniel Kibblesmith (A) Kano (CA) Julian Totino Tedesco
The must-read superhero-action-family-drama-buddy-comedy throwdown of 2018! It's the ones you love that hurt you the most...and, in the case of super-powered adoptive brothers Eric and Woody Henderson - aka Quantum and Woody - this is defi nitely going to leave a mark! Quantum has kept the truth about Woody's biological father a secret, and now that Woody has found out about his brother's betrayal, their once-promising superhero career has ground to a standstill. So now it's time for one last shot at teaming up as our heroes head "down under" - ahem, to Australia - in search of Woody's one true DNA match. Like father, like son? Let's hope not. You'll believe two men and a goat can fl y coach when the new adventures of the world's worst superhero team continue with a slightly less collectible second issue from rising star Daniel Kibblesmith (The Late Show With Stephen Colbert) and dazzling artist extraordinaire Kano (Daredevil)! 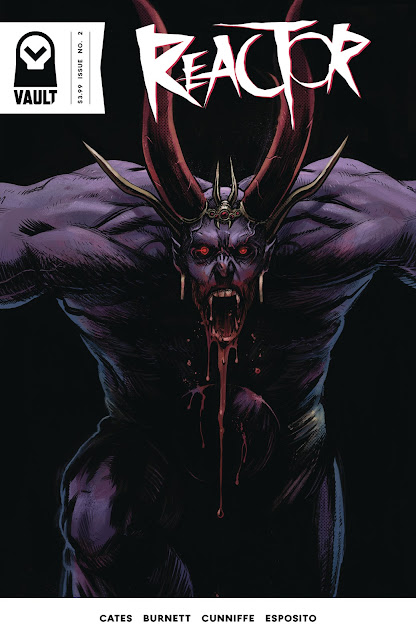 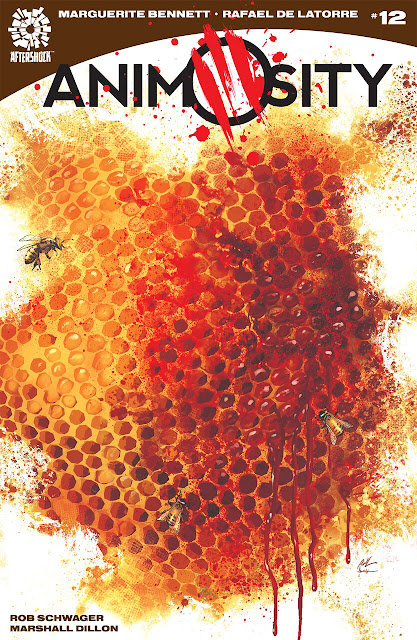 (W) Marguerite Bennett (CA) Marcelo Maiolo (A/CA) Rafael de Latorre
The twisting timelines converge as Jesse races to stop a war and Sandor dives into the darkness for the family that he loves.
"Animosity looks to be Aftershock's first true classic, the book that'll put them on the map." - Tara Giovannini of IGN.com