Tis the season...but not just on Earth! The Hole World has holidays too, and in this special CURSE WORDS event, you'll see how Wizord, Margaret, and their pals celebrate the season. With looks into the cast's pasts and visits from dearly departed wizard-y friends (hey there, Cornwall...), this one's not to be missed. 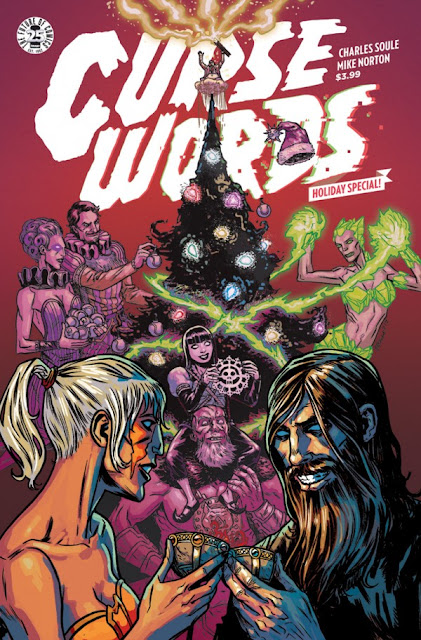 Curse Words Holiday Special culminates all of the first ten issues as a celebration from both the writers Charles Soule, Ryan Browne and the artist Mike Norton. It is full of witty jokes, sly remarks, fun cursing and for the Christmas themed issue, it makes this particular comic extra special for fans.

For someone who hasn't read any of the previous comics, it is about the dark dread lord Sizzajee who tells how he celebrates the winter Christmas holidays with his nine magical disciples (including Caruso, Wizord, Margaret), gather around him with the celebration ritual called "Meet a Meat." This is essentially a large hideous flying beast with large google eyes and feathered wings which they let free to be hunted. The first mage to capture and cook it wins the tradition with the best prize presented by lord Sizzajee.

I certainly didn't have to read any of the previous comics. We get to know all of the characters names who are a constant annoyance and bickering with each other Soule uses a lot of wit and inventive punchlines. Dread lord Sizzajee is the master at the throne of the Hole World delegating work to the mages as he pleases, Lord Cornwall and Lady Violet are taking the contest very seriously with their spell learning, the white-haired female mage Ruby Stitch and long-bearded immature wizard Wizord are highly competitive. However, Ruby and Wizord are placed in the background for most of this comic until right at the end. Cornwall and Violet are the main focus as we see them cross many different realms of snow ice, woods, and checkered chess worlds to find Jane the so-called beast!

The artwork by Mike Norton (Revival) uses various styles of great storyboarding here with the diamond style paneling. From the bright squiggly contours of the snow mountains and swirling smoke to the dark bundled shadows of the main characters. I especially like the chess world scene where they all do battle, it blends some of the colorful texturing together of both the light and the dark contoured foreground of the animated pawn chess piece!

Curse Words Holiday Special is a fun postscript to the comic series. It brings all the great moments in one issue acting as a "best of "album. For its first winter special, it certainly is thrilling and absorbing!