REVIEW: 'No. 1 With A Bullet' #3 by Jacob Semahn, Jorge Corona, and Jen Hickman

After a disturbing and heart-wrenching second issue that found Nash Huang devastated by the leaking of a secretly filmed sex tape. She was in the eye of the storm powered by media exploitation and social network shaming. As if the public humiliation and invasion of privacy wasn't bad enough, her cyberstalker has invaded her home and a mysterious Biblical passage written on her wall. 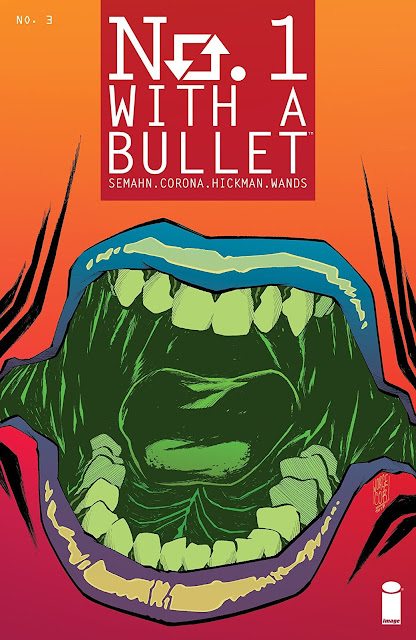 As terrifying as the prospect of someone entering your home and scrawling something ominous on your wall may be, Nash handles it surprisingly well in talking with the sympathetic police detective. No sign of forced entry opens up the number of suspects who had digital code access to the apartment. It's one thing to be stalked online, sent disturbing messages, and it's a whole other level of douchebaggery to break into someone's home. Jacob Semahn has brought these horrors to the fore in this all-too-real story vividly illustrated by Jorge Corona's unique penciling with Jen Hickman's stunning colors.

Meanwhile elsewhere, Jad Davies finds himself under media scrutiny, his sex scandal plastered on television and the press outside his door. In talking with his sleazy PR guru, Jad reveals regret for recording his encounter with Nash without her consent. He seems genuinely contrite and letting his guy spin this story given the opportunity. This just demonstrates how Nash gets the ugliest treatment for this scandal despite being the victim. Jad will surely overcome this without much fallout while Nash is slut-shamed and traumatized.

Nash visits an artist friend in need of some inspiration while at the Museum of Death of all places. This is where things get weird. During an apparent hallucinatory episode, Nash is addressed by the victim of one of the most famous unsolved murders in history. The Black Dahlia as she was called at the time of her gruesome death offered Nash a cautionary tale, of not letting someone else define her or allowing herself to be branded for public consumption. It's the first scene in the series that transcends reality, opening up some questions about Nash's mental state or the introduction of a supernatural element.

Either way, the scene like the rest of the comic is a dazzling display of creative synergy between Jorge Corona and Jen Hickman. As the story begins to spiral in conjunction with Nash's mental state, the layouts become less structured, more fluid and out of control. Hickman's colors are vibrant and rich punctuating each panel with striking hues. Corona's designs are as dynamic as ever.

'No. 1 With A Bullet' is very much a story for our times, delving into the heart of online abuse and harassment. Things take a weird twist in this issue but it remains involving and engaging. Semahn is on to something and we can't wait to see what it is. There's also an important new feature included at the end of issues involving letters, articles, etc from real victims.