REVIEW: 'The Further Adventures of Nick Wilson' #2 (Of 5) by Eddie Gorodetsky, Marc Andreyko, and Stephen Sadowski

Nick can't escape his past when an old foe comes knocking on his door. His luck seems to be turning around when he meets a mysterious woman at the bar. It's not easy being normal after you've had superpowers, nothing else compares. Nick has to make some decisions that could get him out of his rut. 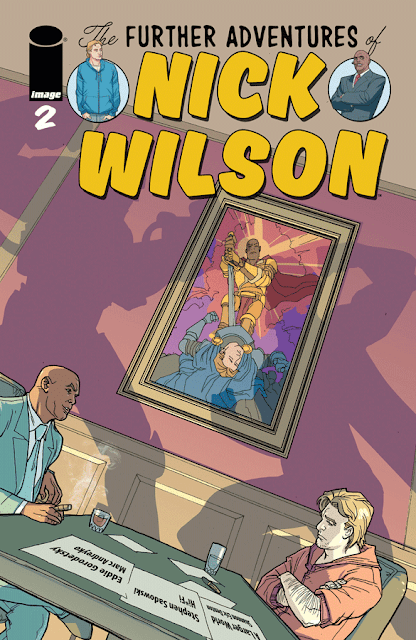 THE FURTHER ADVENTURES OF NICK WILSON #2

Every Superman needs his own Lex Luthor and for Nick Wilson, that arch nemesis was Clive Morganfield. While Nick had his powers the two had some epic battles. Now, with Nick just as normal as any schlub on earth, Clive had to settle being satisfied as a normal billionaire industrialist. Seemingly bored, Clive comes to Nick with a very kind and potentially lucrative offer that reeks with suspicion.

Every Superman needs his own Lex Luthor and for Nick Wilson, that arch nemesis was Clive Morganfield. While Nick had his powers the two had some epic battles. Now, with Nick just as normal as any schlub on earth, Clive had to settle being satisfied as a normal billionaire industrialist. Seemingly bored, Clive comes to Nick with a very kind and potentially lucrative offer that reeks with suspicion.

When we were introduced to Nick in issue one, he was working children's birthday parties to make some cash. It was dehumanizing and demeaning but he wanted to stay lowkey and milk whatever was left of his fame. Broke and seemingly directionless, Nick has to decide whether or not to become business partners with his one-time enemy. Clive has big plans for a museum dedicated to Nick. It would celebrate their exploits as adversaries in a high tech and exciting venue. All of it sounds great, which should make Nick's decision that much easier considering he doesn't have any other prospects. There is, of course, the underlying suspicion that what Clive is offering sounds just too good to be true.But what else is a has-been hero going to do instead?

'The Further Adventures of Nick Wilson' is an unconventional superhero comic considering that its hero is powerless and basically a bum. Eddie Gorodetsky and Marc Andreyko write a melancholy Nick but without making him a buffoon. He's a good-natured guy down on his luck feeling lost without his powers as I think any of us would be. We've all dreamt of having powers - flying, super strength, super speed, telekinesis, adamantium claws - but what if we had them and then just as suddenly as we got them they were taken away? I'd feel bummed out having to live out the rest of my life as a mere mortal too after feeling invincible.

This is not your typical comic, it reads more like an engaging drama than a caped action thriller and that's okay. It speaks to the versatility of the medium to be whatever it wants to be in whatever genre you prefer, sometimes mixing them and making something as entertaining and as appealing as this. Nick may be a slacker now but you still root for him to get his life together. As shady this deal with Clive might seem he really doesn't have better options. It could be the best decision of his regular life or a total con job by his rival.

Stephen Sadowski and Hi-Fi produce some colorful expressive pages. Because the issue is dialogue-heavy, the art team makes the most of facial expressions and images of confrontations from the past. Sadowski skillfully draws out all of Clive's swagger with a look, Nick's skepticism with a smirk, and body language between Nick and Coco at the bar. Seeing Nick and Clive in their heyday really opens the possibilities to more flashbacks to really bring home just how powerful Nick used to be.

'The Further Adventures of Nick Wilson' is a well-produced piece of entertainment that continues to defy what a superhero comic is supposed to be. Nick's exploits are at times funny, sad, hopeful, and endearing. What exactly is Clive up to? Could this really be Nick's chance to be honored for his heroics? Will he see Coco again? I have to say I'm hooked.