Just when you thought Mark Millar and John Romita, Jr. had retired 'Kick-Ass' in all its forms comes a new era that isn't a reboot or a relaunch but an extension of the same universe with an entirely new lead character and tone. 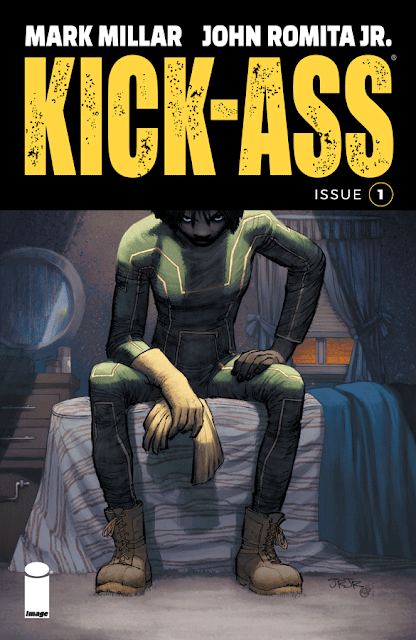 With "The Dave Lizewski Years" behind them, Millar and Romita have also left behind the satirical ultra-violent meta-fanboy-turned-superhero saga that earned them great success culminating in two big screen adaptations. 'Kick-Ass' #1 leaves that legacy intact while broadening the appeal of Lizewski's vigilante persona to a new hero who is more qualified to literally kick ass that he was when he began donning his homemade green and yellow costume.

Meet Patience Lee. Fresh off of serving her country in the military for the last eight years. Patience looks forward to coming home for good to her husband and two children, finish her schooling and getting that engineering degree. Upon returning she learns her no-good husband has run off with a co-worker to Hollywood to pursue his musical dreams. Forced to support her family on her own and postpone her education once again, Patience takes on some low-paying and thankless jobs to make ends meet. Frustrated and broke she decides to use the combat skills she honed as part of the Night Stalkers unit in Afghanistan to rob from neighborhood crooks to pay her bills and give some away. Becoming Albuquerque, New Mexico's Kick-Ass serves as the perfect cover to infiltrate the local nightclub.

Patience and Dave couldn't be more different. He, of course, was a white teenage comic book fan determined to become like his fictional heroes fighting crime and cleaning up the streets of New York. Often in over his head and saved repeatedly by the finely tuned fighting machine that is the younger Hit-Girl (her new series debuts on February 21 by the way), the original Kick-Ass was a resilient knucklehead willing to take a beating to give one all in the name of justice. He became an inspiration capable of assembling a team of like-minded individuals willing to put on a costume and fight back.

As for Patience, fighting, and resiliency came naturally as an elite soldier in the Army. Millar demonstrates just how well she can handle herself in the opening pages setting the tone right away that she is not to be trifled with. The African-American mother of two has paid her dues to her country but most importantly to her family putting her life on the line to support them and earn her G.I. Bill. Her plans of concentrating on herself for once and going to school are dashed suddenly but her determination, strength, and smarts shine through. She's fighting for survival after being betrayed with plenty on the line. A far cry from Dave's motivations which makes this series more traditional, grown-up, less dark comedy and more of a political statement. It's also brutally entertaining.

Romita feels right at home on 'Kick-Ass' again with his signature art style, well-paced layouts, and smooth fight choreography. Few artists are as efficient and as impactful as Romita is with his fight scenes. There aren't any wasted panels as Patience dispatches her opponents neatly with one forceful movement after another. Romita makes you feel every punch, kick, and eye-gouge with carefully choreographed sequences that pop from panel to panel. It's good to have him back and Peter Steigerwald's muted earth tones keep the scenery grounded and gritty with an occasional explosion of emotion-defining color.

Millar and Romita, Jr. breath new life in the 'Kick-Ass' universe with a hero for our times - a fierce black woman saving her community while supporting her family and her dreams. A more serious take on their green-and-yellow suited vigilante with the same bone-crushing action and exciting art. The legend of Kick-Ass continues and Patience makes her presence felt as the more than worthy successor.