While Dom tries to locate her dad, chaos ensues when underground racers try to take over the streets again attacking the WGP and hijacking Crush. 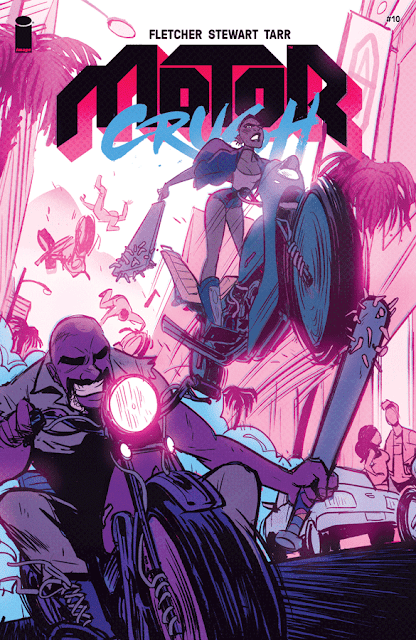 Brenden Fletcher and Cameron Stewart have put Dom through so much that she's overdue for a win. It doesn't come easy as she searches for her dad but has to put up with Decimus Wexler and his dickish attitude. It's his fault, after all, it was his dosage of Crush that Dom took that caused the time jump turning Dom's life upside down. Now he's training the smitten Ya-Ya while withholding Dom's true origin for leverage. If that wasn't bad enough, the Royal Bastard Squad has their sights set on taking the Crush stash from Denim Fang.

In the two years that Dom jumped a lot changed, most notably Crush was taken off the streets leaving racer gangs idling. Now, they're looking to make a comeback and the RBS is leading the charge to rule the streets again. It's an interesting development that raises the stakes in 'Motor Crush' that broadens the danger for not just Dom but everybody else including the WGP circuit.

As usual, Babs Tarr does stellar work on art from beginning to end. This issue, in particular, had her talents on full display, from chaotic action to small moments of emotion to tense confrontations, Tarr nails the pace, tone, and beats. Her colorful animated style gives 'Motor Crush' its personality.

'Motor Crush' delivers an action-packed chapter that offers Dom some hope, for a change. Old enemies, new enemies and one pain in the ass throw new obstacles in her way but finds a way to persevere. The series seems to be back on the upswing after putting Dom through hell. It's still a fun book that looks even better.