The simplest way to describe Michael Moreci's latest sci-fi opus 'Wasted Space' is to use the solicitation's own words, "Preacher + Phillip K. Dick + Star Wars." It certainly has that hybrid vibe with an attitude that is all Moreci. 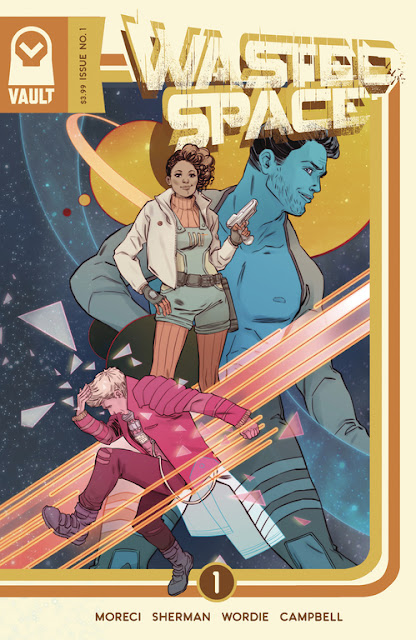 Moreci introduces us to another dystopian world that would seem outlandish and extremely heightened if the calendar didn't read 2018 and we already had our share of demagogues and hypocritical figureheads. Nonetheless, 'Wasted Space' takes it one or two steps further when in a time of uncertainty and desperation lead many to turn to the comfort of religious extremism and drugs. One former prophet, Billy Bane, has had it and would rather retreat to some corner of the world than try to save it. That is until Molly Sue walks into his life.

Moreci's talent for dialogue and exposition is on full display from the opening line to the last. "The galaxy is totally fucked" sums up this world where people cling to any kind of hope they can get their hands on, whether it's gospel or chemically driven. It's ripe for the hopeless to find some hope and keep the faith. Molly Sue could be the true prophet while Billy remains disillusioned and a cynic. Regardless, a bounty on Billy has made things dangerous for him but with his trusted friend, Dust, a fuq bot (exactly what you think it is), they may make it through alive.

Hayden Sherman (Cold War) is the perfect collaborator to bring this crazy world to life with a unique blocky pencil style that adds an other-worldly appearance, unlike anything you've seen before. Colorist Jason Wordie continues to shine as he did on the amazing 'God Country' with Don Cates and provides some eclectic but warm colors that set the mood in a place among the stars.

'Wasted Space' is off to a fast start, setting up a wild sci-fi adventure that's not only brimming with attitude but a sly subtext about the excesses of the world. A potent mixture of clever dialogue, creative design, and extraordinary world-building gives 'Wasted Space' an urgency that sucks you in and demands your attention. Moreci and company give Vault another sci-fi comic that's a must-read.

[EDITOR'S NOTE: A previous version of this review incorrectly stated that Jason Wordie and Michael Moreci worked together on Image Comics''God Country.' It was actually the ubiquitous Don Cates who served as writer. The watchful overlords at Vault Comics caught the error and kindly made us aware of our mistake. Apparently, Michael Moreci and Don Cates are two completely different people.]