Patience has had it relatively easy as Albuquerque's Kick-Ass but she's about to walk into the lion's den and faces her greatest threat so far. 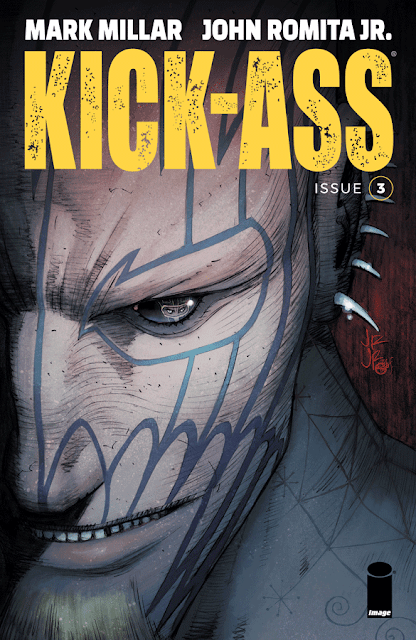 Taking from criminals and giving to charity has been a relatively simple task for the former military vet and suddenly single mother but soon Patience will unwittingly come across one of the most sadistic mob enforcers in town. Mark Millar introduces us to Violencia (Spanish for violence), a fearless killer who floats in and out of jail at will and is set to rejoin Hoops' crew. The opening scene demonstrates to what lengths Violencia will go to exact revenge. It's an unconventional anecdote as only Millar could provide but it clearly shows that Violencia is not to be messed with.

Meanwhile, Patience begins to fall into the trap many fledgling heroes/vigilantes and that's a sense of complacency and overconfidence. Some easy scores have given her some peace of mind enabling her to pay the bills, spoil her family, and give to charity. Success has made her a little careless and in issue three it's about to cost her. Adding insult to injury, she realizes just how deep her sister's man Maurice is with Hoops. It turns into a bloody mess with a killer cliffhanger to boot.

John Romita, Jr., is as sharp and precise as ever. Romita's composition is on point and framing from scene to scene is a master class in pacing and impact. You can sense Romita is leading you to something important, lulling you with great detail and backgrounds, until you turn the page and bam, the reveal is made. It hits you like a punch to the head.Peter Steigerwald soft muted colors belie the gruesome images they give life to. Once again, art and script meld together for a fast-paced symphony of violence and action.

'Kick-Ass' continues to evolve as Patience learns a hard lesson about always staying ready and vigilant. Her overconfidence may have just cost her. The addition of a truly ruthless villain serves as a great wildcard and counterpoint to Patience's more philanthropic endeavors. A new revelation and a gripping cliffhanger will have you white-knuckling this issue. Millar and Romita, Jr. can still thrill like few in the industry.