Free Comic Book Day is always a great event that introduces some new and exciting books to fans who may not otherwise get their hands on them. 'Relay' #0 is one of those books that you need to experience to wrap your head around the concept. It's a multilayered sci-fi story that combines faith, conformity, and 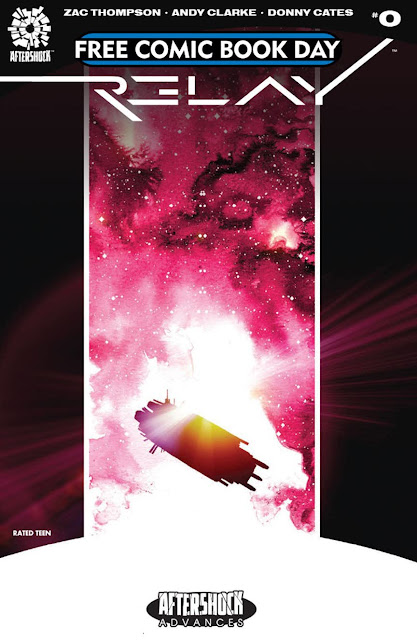 In order to try and understand where writer Zac Thompson is coming from, you have to read the official description. "A story of community, religion, madness and the first planet to succumb to the universe's biggest paradigm shift. A weary space traveler arrives on a primitive planet lost in the dark ages. The shamanic tribe who resides there are unsettled and uncertain about their future. They rely on hunting and gathering to survive until the charismatic traveler offers a tantalizing and dangerous solution: The Relay. A Monolith designed to spread conformity of ideas, technology, and progress across all discovered worlds."

From a story by Eric Bromberg, Donny Cates, and Thompson, 'Relay' is a tale as old as time itself. It's an allegory for colonization and religious conformity. This stranger from space lands on this primitive planet and begins to teach them things to improve their way of life, earning their trust, long enough to demand they conform to the monolith, the Relay as represented by this tall dark tower buzzing with unknown energy capable of traversing time and space with a touch. They monolith will make their lives better, the stranger says, whether they want it to or not. The parallels between this and the spreading of Christianity around the world by colonizers over the span of history is undeniable and masterfully conveyed in the philosophical differences between the stranger and the tribe's shaman.

Thompson presents a compelling argument from both sides until one's extremism overtakes the other. It's a fascinating premise for a comic book that provokes a thoughtful examination of what it means to be civilized when the approach to life is to have it conform to one idea as sacrosanct. This prequel ends with an ominous message that sets the tone for issues to come. How far will this stranger go to spread his ideology across the universe?

Andy Clarke provides the clear sharp lines that crystalize Thompson's vision. Everything on the page feels organic and realistic. Even the spaceship and the monolith itself come across as totally plausible with Clarke's attention to detail. Dan Brown's colors lend to the terrain of the sparse desert to the bountiful growth of green crops. The shots of the ship in the sky with a little lens flare are gorgeous.

'Relay' is not your typical sci-fi comic, it has a definite point of view, a philosophy that carries the character's motivation throughout. It's a thinking man's comic if I can say that, full of ideas that could be interpreted as divisive but that's what makes this so compelling. The cherry on top is how beautifully illustrated it all is. 'Relay' is something AfterShock can be proud of and it shows its commitment to quality science fiction over merely sensationalized capes in space. 'Relay' is a quality read.