One of the great hidden gems in the comic book industry is Black Mask Studios' CALEXIT. When an autocratic president demands the deportation of all immigrants, California's protective sanctuary state status tears the state apart leading to federal forces marching in to enforce the law with extreme prejudice. The uprising factions have to take on not only the feds but rival militias. This issue concludes the first explosive arc. 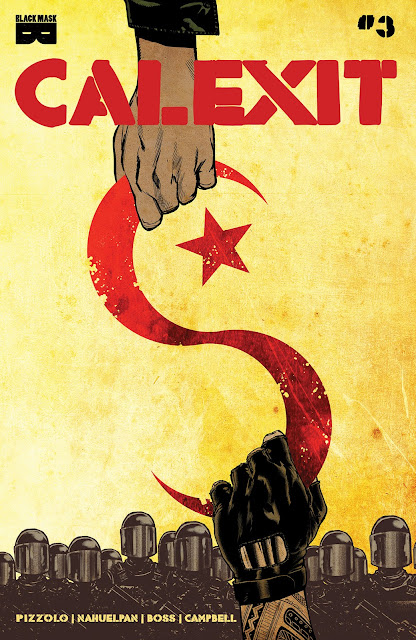 Writer Matteo Pizzolo takes our current volatile political climate and raises it to eleven with this story about authoritative government policies, a fascist police state, and those in defiance of it. It's a literal resistance like those in dystopian novels and films where the fight to emerge from under the thumb of an evil empire rage on in the streets. The struggle is personified in Zora, the leader of the Mulholland Resistance, who enlists the help of a courier named Jamil to smuggle her out of enemy territory. Jamil's sells things to both sides and tries to remain neutral as the warring factions butt heads. However, he won't be able to remain neutral forever.

Pizzolo presents this minefield from different perspectives. There's Zora's side who vow to protect immigrants targeted by the government at all costs. There's Crowbar who's been elevated to the leader of the Bunkerhill Militia contingent on him capturing Zora. Ultimately, CALEXIT is about these characters and like brilliant TV dramas Sons of Anarchy, Breaking Bad, and The Sopranos, its strength lies in their convictions and motivations that drive the narrative. They are opposing forces fighting essentially in a war that just happens to take place in a politically fractured California. The stakes could not be any higher for everyone which gives this series a tension-filled atmosphere where anything can happen. Frankly, by the end of each issue, you'll be demanding the next one.

Amancay Nahuelpan and Tyler Boss have laid out an incredibly well-paced layout that's brisk, sexy, shocking, violent, and totally compelling. Nahuelpan's character designs are infused with so much unspoken personality and convey a bevy of emotions. Boss' colors are rich and saturated heightening the drama as the tension rises until the page explodes. Paired with maps and flags that pepper the issue adding context and geographical information by Richard Nisa and Robert Anthony, Jr., respectively, the reader is drawn into the story even further.

CALEXIT is a cautionary tale that isn't too far removed from the real world. It reflects our greatest fears and appeals to our most primal desires to fight and resist. Pizzolo has tapped into our collective psyche to reveal the best and worst of what we're capable of. It's also one hell of an entertaining comic that is as timely and urgent as anything out there. This is a must-buy.