Trapped, beaten, and outnumbered Patience Lee faces her first real test as Kick-Ass as she tries to save a policeman being held hostage by Violencia and his goons. Will she be exposed? 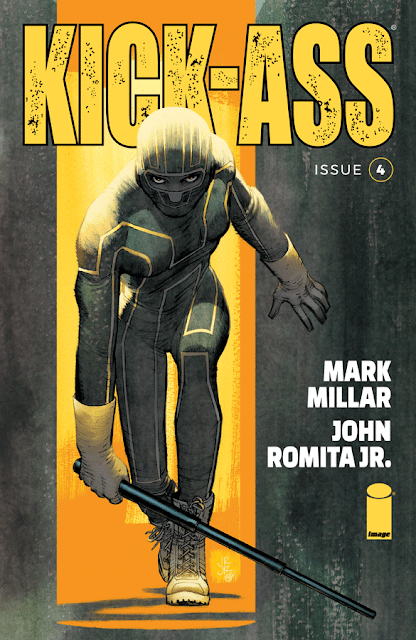 It wouldn't be a great hero's journey without some adversity or in this case, a lot of adversity to test and harden the resolve of the hero. Patience is in deep and catching hands left and right. Mark Millar has created an impossible situation for his new Kick-Ass. Thanks to her smarts and her military training she keeps her wits about herself in order to try to find a way out.

Patience has had it relatively easy so far going out as Kick-Ass taking from crooks and giving to the needy (keeping some for herself). She's been able to outsmart and outmuscle them so far giving her a false sense of confidence. Now, the table's have turned and there's seemingly no way out alive with the threat to being exposed not to just Violencia but to her brother-in-law. The issue is one long nerve-wracking and brutal sequence of survival and calculated risk.

John Romita, Jr.'s fight choreography is like a deadly dance. One punch, one swing, one crotch-grab at a time. Romita is relentless with pacing that hums with tension and designs that are visually gripping. No one does action like Romita as any fan of Kick-Ass knows. The color work from Peter Steigerwald accentuates each scene with impactful uses of colors that mimic moving fists, moving vehicles, and plenty of explosions. There is so much to take in art-wise you won't mind that the issue only moves the plot ever so slightly.

'Kick-Ass' #4 is an action movie in print with all the fighting, car chases, and twists you'd expect. Millar puts Patience through her paces as she uses her wits to outsmart a roomful of gangsters. This 'Kick-Ass' lives up to its legacy with class, grit, and signature ultra-violence.