Looking to help her father, Willa turns to his former partner, the wealthy Roger Darrow. Unfortunately, he has no intention of helping her and now she and her father are in serious danger. 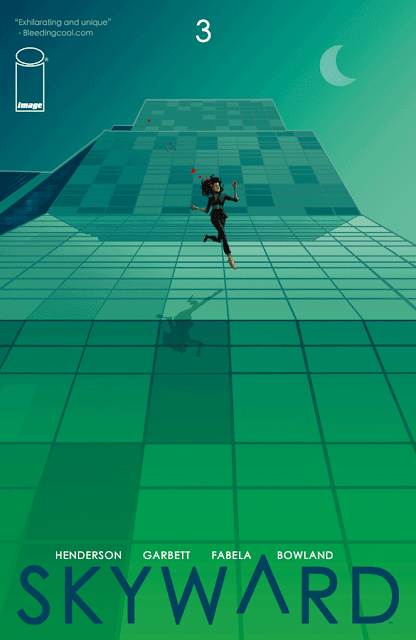 
In a world that was literally turned upside down when gravity suddenly became virtually nonexistent, Willa doesn't know a life with full gravity. The low-G life is beautifully depicted by artists Lee Garbett and Antonio Fabela. The buoyancy of floating is perfectly captured with rich vibrant colors. Willa's joy and optimism are also conveyed with wonderful expressions and body language. In this chapter, Willa's good intentions, and naivety place her in danger as Darrow's full heel-turn is revealed.

The last issue gave us a glimpse at a potential sinister twist to the magnet magnate who made a fortune creating technology that gave those who could afford it, the ability to plant their feet on the ground and live like G-Day never happened. As a former colleague of her fathers, it made sense for Willa to seek him out for help but they had a falling out for a reason. It became clearer as their conversation continued that Darrow was agitated. The opening pages give us a good look at his character as someone who definitely did not "save as many" as possible on that fateful day. Now, with his former partner's daughter in his office looking to help her father with a way to reverse the loss of gravity puts his entire empire in jeopardy. And he won't let that happen.

What happens next I'll detail because of the surprising escalation of violence. It's spoilery but worth noting for its questionable pivot. Darrow is obviously the villain here and as he grows agitated and angry he takes things to a much serious level, arguably unnecessarily.

After being told that her father wants to reverse the loss of gravity, Darrow demands to know where he is. He's not going to let someone ruin the fortune he's accumulated by someone who hasn't left the house in twenty years. He locks Willa's gravity boots so she can't move and begins to interrogate her, followed by punching her. She's immobile, unable to run away, at the mercy of his rage. Here's a grown man who's obviously the bad guy but this use of violence against a young woman is harrowing and gratuitous. He's not very smart either. He could have just pretended to help her father then capture him or whatever instead of jumping to assaulting her. She fights back and escapes, once again evading a very dangerous situation in downtown. Darrow has a lot to lose but his petulant and psychotic depiction lacks nuance or dimension. He's just a caricature and that hampers the narrative. He also laid on hands on the innocent Willa and that is unacceptable.

Despite Darrow's unwarranted violent episode and the predictable ending, 'Skyward' remains an entertaining and enthralling comic anchored by some incredible artwork. Garbett and Fabela do some of the best work in comics right now. Issue three lays out the stakes and reveals just what Willa is up against, hardening her resolve and raising her game. 'Skyward' is still a solid read but needs to tread lightly so as not as to settle for one-dimensional characterizations.