The artist of the offbeat and award-winning Chew with John Layman is back with an equally weird and delightful dark new tale. Rob Guillory meshes a conciliatory father-son relationship with a hybrid biomedical-agri farm. 'Farmhand' is a new quirky horror comic that is just irresistible. 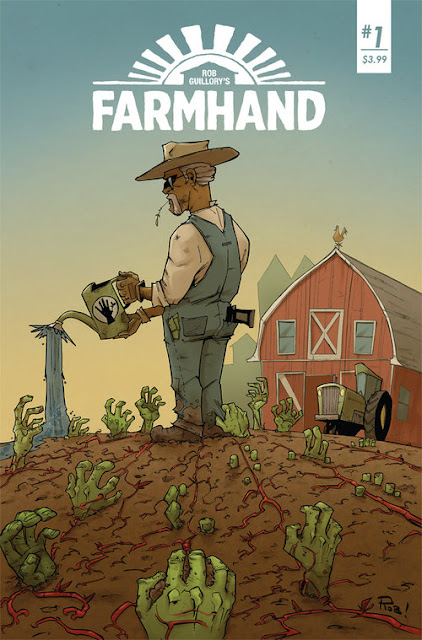 The tone of the debut issue is literally found from cover to cover. Those hands that Jedidiah Jenkins is watering on the cover are not from the living dead trying to break through the soil but actual farm-raised appendages. Jedidiah found a way to grow body parts like he would crops creating an industry to benefit mankind. He even has a high-tech and interactive farm tour describing his great achievement. It's sufficiently creepy but benevolent in the spirit of Chew.

You would think Jedidiah had it all but in fact, he's been estranged from his son and his family for some time. As a form of reconciliation, his son Ezekiel makes a visit to the farm with his family. This is really the heart of the story. Amid the quirky horror aspects of chopping off arms off a tree to replace an amputee's arm, is the uneasy reunion between father and son. It's a heartwarming visit where grandfather and grandkids get to know each other again. Guillory strikes some emotional chords with these moments and it balances the story between gory dark comedy and family drama.

Despite getting virtually a complete arc in the debut issue and giving readers their money's worth, Guillory provides enough things that exist just underneath the surface that teases that not everything is as it seems. There are other forces at work that will make things difficult for the Jenkins family.

As the artist, Guillory does a wonderful job of using his signature cartoon style to bring this world to life. The characters are full of life with expressive faces and body language. Even the more gruesome scenes are delightfully absurd and brightly colored by Taylor Wells. There's a lot going on in virtually every panel so it's worth exploring every inch of them. You can sense Guillory's passion for the series in every detail.

'Farmhand' is a hugely entertaining dark horror comedy with a heart. Guillory injects so much life and love in his creator-owned series that it becomes irresistible. It's refreshingly offbeat and endearing with plenty of shocks and originality. Highly recommended.