Jeff Lemire and Eduardo Risso continue their arc as Hit-Girl runs into a bit of a snag in the Great White North. With her foot caught in a bear trap and one bearing down on her, she'll have to rely on the kindness of a local mountain man. 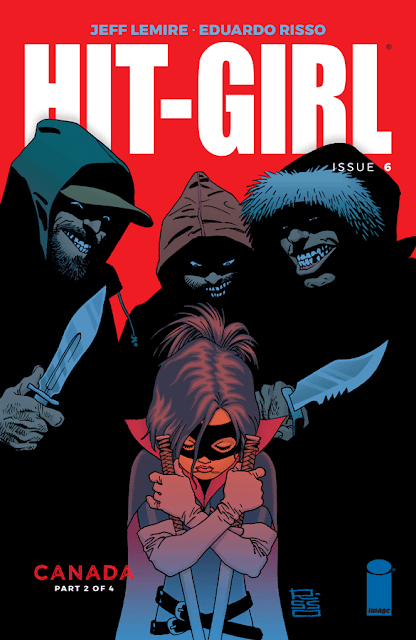 
In the last issue, Lemire took Hit-Girl to his home country, the land of maple syrup, hockey, and Celine Dion. She was hunting Billy the drug dealer and though she got her man a bear trap got her. She's saved by a grizzled old man who lives in a nearby cabin and off the grid. It's quite the culture shock for Mindy. Meanwhile, Billy's drug lord father has come to town looking for him and is ready to put a bullet in her. Mindy is wounded, outnumbered, and running out of time.

The first arc by creators Mark Millar and John Romita, Jr., was a cartoonishly violent festival of chaos in Colombia. All the signature psychotic flair of the original 'Kick-Ass' series was on display as if Millar and Romita had never stepped away. They give way to another all-star duo in Lemire and Risso who know a thing or two about comics. Their approach to this series is much different than their predecessors but no less entertaining.

Lemire's pacing is more deliberate and the tone more subtle. There's plenty of nuance in the interactions between the fiercely independent Mindy and the helpful mountain man who tended to her wound. While not completely vulnerable, Mindy reluctantly accepts the aid while still cursing up a storm and putting up a strong front. There's a nice interlude where she visits with Big Daddy which only humanizes her even more. It's quite the contrast from the trigger-happy death merchant we're used to seeing.

Eduardo Risso is a great artist for many reasons but his ability to give the reader just enough detail in each panel to tell the story. The backgrounds can be scarce or virtually blank but it doesn't matter as the reader you're in Risso's hands, he's guiding your attention, your eyes to what matters on the page. As Mindy drifts off to sleep you're transported along with her as Risso plunges you into her dreams as well. Risso casts a spell that you're unable to break free from until the very last page. Colorist Patricia Mulvihill is his accomplice, as she infuses brighter hues to contrast the shadows in the cabin or the blinding whiteness of the snow. The art like the words has a hypnotic effect that you don't want to break free from.

'Hit-Girl' #6 shifts into a lower gear, providing time to for Mindy to heal, accept some compassion and humility. It also allows for the bad guys time to pick up her trail in what's sure to be one hell of a standoff. Ultimately, Lemire and Risso find an almost poetic western spin on her recovery in the frozen hills of Canada. The gunslinger is rescued and humbled by the kindness of a stranger. This may seem like a lull in the arc but not to worry though, there's a bloodbath just around the corner.