Any story arc finale with Mark Millar's name on it is going to be an over-the-top action bonanza the likes of which we haven't seen since the action movies of the 80s. 'Kick-Ass' #6 lives up to Millar's reputation and the legacy of the original series with a blow-out ending that finds Patience fighting her way out of certain death. 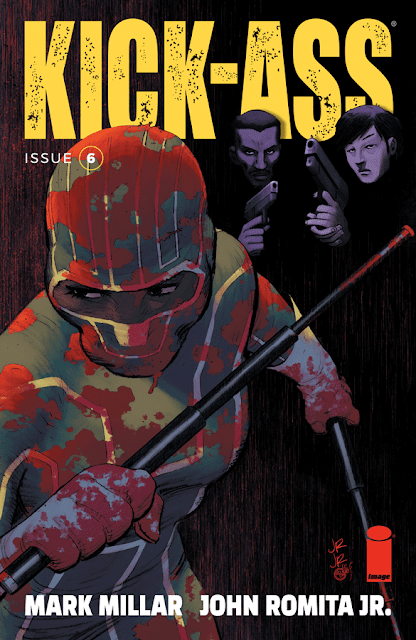 It's not easy reinventing a title that was beloved and groundbreaking like 'Kick-Ass.' It deconstructed the superhero/vigilante mythos from a fanboys' perspective with meta humor and extreme violence. Dave Lizewski and Mindy McCready aka Hit-Girl became a relentless crime-fighting duo against the mob. Allowing Dave to retire and laying to rest the original series was a nice conclusion to the wild and bloody series. The easy thing would have been to rest on the success of the past and say goodbye to that world. However, in comics, nothing truly ends and it took a new idea and a special protagonist to open up another chapter in the 'Kick-Ass' universe.

Changing location from New York to New Mexico and from a comic book nerd to a former Army soldier, the new 'Kick-Ass' series couldn't be more different. Patience Lee leaves the military only to come home and find her husband has run off with another woman. She's left to raise her kids by herself and pay the bills on her own. This inevitably leads to taking on a Robin Hood approach, stealing from drug dealers and paying herself and charities with the loot. She's smart, motivated, and highly trained. What could go wrong?

Issue six ends the first arc solidifying her transformation as the new Kick-Ass (she's never referred to as such by name despite wearing the costume). Millar has tested her mettle after some of her robberies were cake walks. Here, she is bound and held hostage by Hoops' goons. They're using her daughter as insurance so she'll comply as they beat and torture her. All seems lost but Patience is very calculating and deliberate. Millar uses her stream of consciousness throughout the series to give us insight as to what she's thinking even in the direst of situations. This is one of those times and while she's evaluating her options, Millar doesn't give away too much, leaving plenty of room for surprises.

It's not a spoiler to say the ending is an explosive display of firepower and destruction. Anything else would be a letdown. It's not all gratuitous and with some clever gunplay, it elevates it to more than just a shooting gallery. Somehow, Millar finds a way to make an impossible situation possible by taking some risks that pay off.

John Romita, Jr. draws the best action in comics and there's plenty to enjoy in this issue. After a lot of necessary and mostly uneventful set-up in the opening pages, Romita and the story lets loose when the action starts. It's kinetic and visceral but uniquely impactful. It seems the punches land harder, the bullets are more destructive, and headshots more explosive. Peter Steigerwalds' liberal use of red colors contributes to the audacious amount of bloodshed filling the panels. Romita has a wonderful director's eye that builds tension in the quietest scenes as well.

'Kick-Ass' has given way to a new era in vigilante justice. Millar has centered a modern black woman, an Army vet, and mother as the new face of the franchise and she's cleaning up the streets of Albuquerque. It may not have the dark humor of the original but it has an inspirational figure in Patience Lee who is smart and resilient. This marks the finale of an impressive opening arc and it's bound to get even better when Steve Niles and Marcelo Frusin take over in September.