The Magic Order is in grave danger as each member is being targeted for assassination. They need to counter an offensive before it's too late. They gather to plan to do what's next but is it too late already? 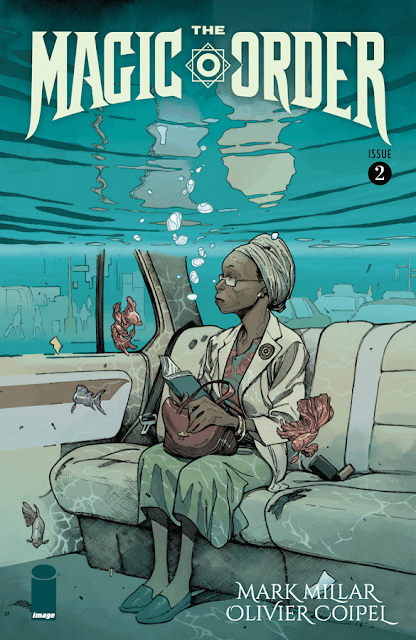 Cordelia is one of if not my favorite comic book character right now. She's dysfunctional and damaged as the rest of her clan but she's got a wicked sense of dark humor and honesty. Maybe a little too honest as her opening scene will demonstrate. It's beautifully composed by Olivier Coipel too and the perfect character-driven cold open.

The Moonstone patriarch has called a meeting of the Magic Order. They're being picked off one by one. Madame Albany has enlisted the help of an assassin by the name of The Venetian and he's making quick work of the wizards. She'll stop at nothing to get her hands on the Orichalcum, an indestructible book of powerful dark spells. The Magic Order is left flat-footed and unprepared to face this level of evil.

Everyone knows Mark Millar is a legendary comic book writer and this series shows once again he's still at the top of his game. After reading this issue it'll be evident why Netflix wanted to make it a series. It's cinematic, magical, and clever. It's also as riveting as a Martin Scorsese mob film. The mob hits here, however, are in the form of some cold-blooded magic spells.

Coipel and colorist Dave Stewart create such a rich atmosphere that feels heavy with tension and dread. The art is brilliantly paced and the diversity among the Magic Order is surprisingly fresh. The magic elements are so subtle but effective. Coipel doesn't try to do too much instead choosing to keep panels varied and simple with superior execution in design and perspective. It's just a masterful job in setting the tone with art full of style and precision.

'The Magic Order' is the real deal. It really is where "magic meets the mob" and why it's so engrossing. Millar, Copiel, and Stewart sacrifice nothing in this thrilling new comic. What it lacks in characterization it makes up in ingenious action and art. This is shaping up to be a monster title. Needless to say but it's a must-buy.