When the intergalactic community is bound by the same monolithic structure and its tenets of conformity it leads to some in society questioning and defying those mandates. These philosophical differences permeate throughout society as it so often does in the real world. 'Relay' #1 delves into complicated ideas about faith, duty, and the search for answers. 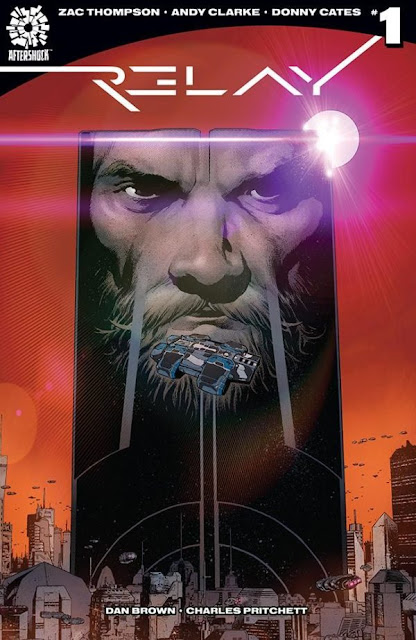 As seen through the eyes of the law enforcement officers who work for the monolith known as the Relay, Jad and William differ in their opinion of the sanctity of their controller. Jad believes the Relay is a merciful God brought to earth by Hank Donaldson to unite worlds with a common edict. William is skeptical that the Relay's influence will last and doubts Donaldson's world exists despite the Relay's frequent calls to find it. Skepticism has already manifested itself in terrorism denouncing the oppressive nature of the Relay. It's sufficient to say, 'Relay' has a lot on its mind and combined with bursts of action the debut series draws you in laying the foundation of the plot by smartly taking a conversational tone instead of straight exposition.

'Relay' cleverly resembles a day-in-the-life of co-workers discussing their philosophical differences that directly affect their reality. It's a great vehicle to build the world around them while provoking topics that could easily be related to discussions in real life specifically about spirituality and religion. Andy Clarke's art is detailed and looks so very lived-in, establishing a world that's futuristic but grounded in its people. The action scenes are fast-paced and well choreographed. There's a cinematic quality to it and Dan Brown's colors add splashes of vibrancy and depth.

'Relay' #1 is a hard sci-fi comic in the spirit of Philip K. Dick that delivers some thought-provoking ideas in an exciting and mysterious way. It's smart and entertaining with a well-meaning leading character that wants to make us a believer too. 'Relay' has all the makings of an intriguing hit series.