Frank Dominguez is new to the border town of Devil's Fork, Arizona. As if fitting in wasn't hard enough, he'll have to navigate around neo-nazis, potential bullies, and some mythological monsters emerging from a tear between worlds. Eric M. Esquivel, Ramon Villalobos, and Tamra Bonvillain usher in a new era in Vertigo Comics with this provocative and entertaining debut. 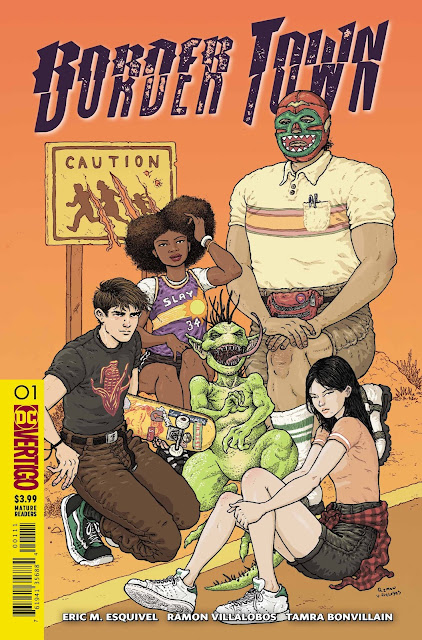 When it was announced that Vertigo Comics was being relaunched, fans were expectedly excited. It was, after all, the imprint that brought adult storytelling in horror, fantasy, crime, and action to a hungry audience looking for more edgy and sophisticated material. It also helped to elevate creators like Neil Gaiman, Grant Morrison, Brian K. Vaughan, Jill Thompson, Nancy A. Collins, Ed Brubaker, Sean Phillips, and many others. It was so influential, Vertigo editors like Karen Berger and Shelly Bond were some of the most respected in the business. Known for addressing controversial issues, DC Comics' creator-driven label introduced a no-holds-barred approach to comics culminating in the birth of the graphic novel.

'Border Town' is the first out of the gate of Vertigo's new line-up. It deftly blends teen drama with horror and fantasy. So far, it's a worthy bearer of the Vertigo name, in the same way, Preacher and Y: The Last Man did. On its surface, the new title is an entertaining supernatural thriller set within a politically-charged border town. A fish-out-of-water story featuring monsters both mythological and the all too human kind. 'Border Town' is an engaging piece of storytelling that draws the reader in with the first addictive chapter told confidently and illustrated even better.

Not everyone was happy to hear a title named 'Border Town' created by two Latinx creators was being released. There's a vocal underground of toxic comic "fans" who are either racist, sexist, xenophobic or all three. They wasted no time harassing Esquivel without ever reading a panel of the new book. Of course, it's not about the work it's about intimidation and bigotry. If their expectation was a politicized comic about immigration issues told from an "SJW" point-of-view then they were right. That's only part of the story because border towns, in general, are inherently political because of the policies that separate one country from another. If you're against cruel bigotry and the dehumanization of immigrants then that sounds like the right side to be on. In this time of draconian immigration laws, 'Border Town' is as timely as ever and relevant but its authenticity derives from its characters and their identities as Latinx and as human beings.

We talk about representation (or lack thereof) a lot and with good reason. People of color are hard to come by as titular characters and found less behind the scenes as writers and artists. 'Border Town' proves that it's possible to have all three in mainstream comics. Why is that important? As well-meaning as white creators have had writing characters of color, Latinos specifically, there are nuanced details both in dialogue and visuals that go unexplored simply because they are unaware. What Esquivel and Villalobos have done is bring their experience and culture and filtered it through the pages of the comic. One scene, in particular, exemplifies what a Latinx writer brings to a Latinx character: 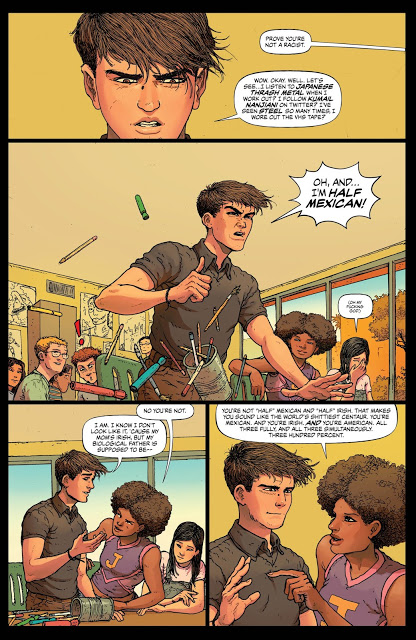 Frank feels like an outsider in many ways. Moving to Arizona with his mom and her boyfriend to a new town, a new school, and as a bi-cultural teenager still finding where he fits in if at all. He's white-passing which affords him a certain privilege, so much so that a neo-Nazi student tries to befriend him. He considers himself half of two worlds, Mexican and Irish, but Julietta reminds him he's a fully realized human being of all three - Mexican, Irish, and American. It's a poignant point that will resonate with readers that believe they have to straddle two cultures but don't feel part of one or another. It's this type of character development that quickly adds more dimensions to Frank and other characters.

Villalobos and Bonvillain create a convincing desert border town complete with radical militiamen, ravenous wild animals, and racial tension. It's all beautifully cloaked in bright colors as varied as the desert sky. Villalobos' lines are detailed and rugged. The action is fluid and impactful as he lays out one visceral sequence after another. The character designs are modern and diverse with monsters that truly frighten and intimidate. There's even a Chupacabra for goodness sake. Villalobos employs some fun easter eggs for the observant reader and Bonvillain infuses it all with a clever color design. Deron Bennett's lettering plays a vital role in delivering some of the most important dialogue and sounds.

'Border Town' is an important comic for many reasons. It's a great supernatural thriller first and foremost but the fact that it includes characters that have been missing from the comic landscape makes it almost revolutionary. Inclusion shouldn't feel like a milestone in 2018 but here we are. Esquivel and Villalobos understand better than anyone what it means to have protagonists that look like them and what it means to Latinx readers like me. Something that should be commonplace is a breakthrough for Latinx creators and characters as 'Border Town' demonstrates that great storytelling is made up of diverse influences that only enrich comics. Vertigo has come out swinging and 'Border Town' is a grand slam of a debut title.