On the run! Fleeing from more than just the law, Livewire's about to find out whether she has the strength to survive on her own in a world that hates and fears her, with only her memories of better days to rely on... but if she's not careful, even those can be snatched away by the mercenary hunting her down! 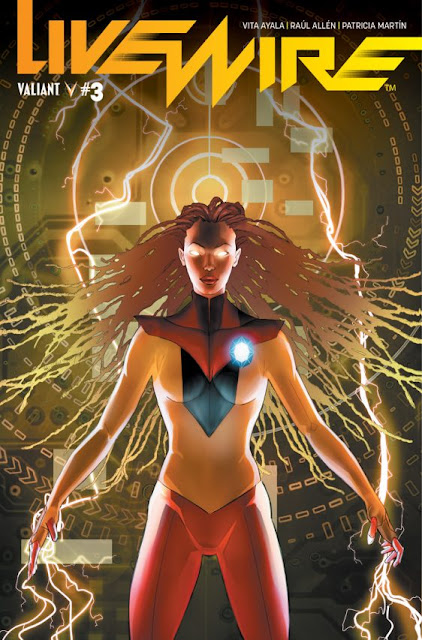 The interesting thing about 'Livewire' and its titular hero aka Amanda McKey, is just how complicated and conflicted she is as a superhero. The life of a superhero has its challenges but good guys are generally beloved by the public and a cause for justice and peace. The reality as portrayed by writer Vita Ayala isn't so rosy and not without its consequences. Great power definitely comes with great responsibility but when that responsibility is torn between humanity and psiots you swore to protect the results can be devastating. For Livewire her "Sophie's choice" has made her an outlaw, a pariah to humans and many psiots as well. She's constantly taken to task for sacrificing so many human lives to save psiots.

Her conviction and character are testing in more ways than one when Pan, realizing his powers, attacks Livewire. He lobs not just shots but verbal jabs at her and she resists, stands firm, and fights back. It's a complicated fight that exposes such harsh truths from both sides. It's what makes 'Livewire' more engaging and intriguing because this superhero universe doesn't have any easy answers.

Raul Allen's framing and choreography of the fight scenes, which make up the bulk of the issue, are fluid and well paced since it's so dialogue-driven. It's not clunky or awkward at all as they trade blows and talking points. Patricia Martin's color scheme is monochromatic in shades of purple. It creates an intimate atmosphere which is fitting for the two psiots who share a history. The dialogue and action work hand-in-hand.

'Livewire' is one of Valiant's most important titles that 'Livewire' is one of Valiant's most important titles because of McKey's role in Harbinger Wars and her impact on the entire universe. Her solo series is exciting and beautiful but full of moral dilemmas. It's complex and thoughtful where the line between hero and villain is blurred. What would you do to save the people you love? For Livewire, that decision has cost her but maintains her dignity. Ayala has made a smart superhero story that's as entertaining as it is emotionally complicated.