#ECCC: Lion Forge Announces 'At the End of Your Tether' from Adam Smith, V.V. Glass, and Hilary Jenkins

Convention season is officially underway for 2019, as the doors open to the exhibit hall at Emerald City Comic Con! Lion Forge kicks off day two of the show with the announcement of At the End of Your Tether, an all-new original series from Adam Smith, V.V. Glass, and Hilary Jenkins, set to debut this June! 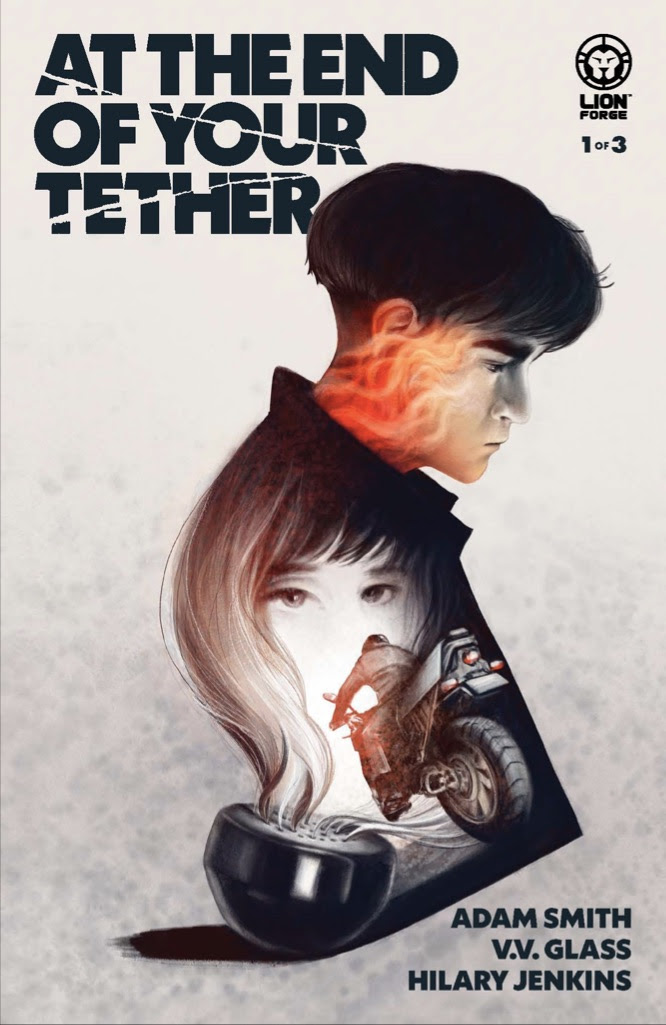 It’s 1997 and Ludo is heartbroken. Arlo was the only real bond he had made in a stiff military upbringing. But since a move to a different air base led to their breakup, Ludo has been acting out—fights in school, skipping classes... He feels directionless now, and it's beginning to weigh on him.

News of a trip back to their former home means that he will have to face Arlo at some point, so to ease his nerves, he gives her a quick phone call. Big laughs and a familiar sort of cadence in her voice don't just instantly calm him down -- they make him excited to see her. But when his family shows up at the base the next day, they find out Arlo has been missing…for a week.

Ludo can't figure it all out. He had only spoken to her the night before. Why didn't she say anything about being in danger? Where the hell is she? Ludo sees an opportunity to redeem himself and takes it upon himself to find her. It's the first time since leaving that he feels he has a purpose; something he can fix.

But as Ludo gets further into the investigation, and details of her disappearance begin to surface, he starts to question how well everyone on base, in town, and even he really knew her. Gone without a trace, the girl he once knew everything about has now become a mystery. Where is Arlo Quinones?

“I am a really big fan of a particular sort of coming of age stories. I mean particular in that my favorites have always funneled that experience and feeling into genre in some form or fashion” says writer Adam Smith. “Strange, weird, magical little things that take the experience of growing up and magnify that feeling with classic tropes. That's how At the End of Your Tether began; the idea of a coming of age noir, a crime story that could only be solved by growing up.”

“When Adam brought us At the End of Your Tether, it felt like an opportunity to experiment with the comics medium. How do we bring that feeling you get when you’re reading a book like Blankets to the single-issue format?” says Lion Forge editor Jasmine Amiri. “We thought it’d be appropriate to give this story time to simmer with an oversized single-issue format. But it’s the team that really delivers the magic in this series with Adam’s unparalleled writing-style, beautifully eloquent artwork from V.V. Glass, and insanely gorgeous watercolors from Hilary Jenkins. This one feels special and I couldn’t be prouder of this noir-mystery-incredibly-earnest-love-story and the team that made it possible.”

"What I've found especially exciting in making this is being able to mess with expectation - it's basically a noir story, but in the 90's of all things” says artist V.V. Glass. “The protagonist's a troubled teen who has a fantastic emotionally-supportive relationship with his parents. There's a love interest who'd solely be that in a different story, but not here. It's been great to be able to make the kinds of characters who very rarely pop up in media."

"My love for painting has helped create the unconventional process which i use to color comics” says painter Hilary Jenkins. “Gouache (a matte opaque acrylic) was used to paint this series. Each page is individually painted, scanned and then digitally finished."

At the End of Your Tether will be solicited in Diamond’s April-dated PREVIEWS catalog for release in June 2019. This three-issue limited series features a brand-new expanded 48-page reading experience at a value price of $5.99 and is being offered to retailers as fully returnable. This is the second series in Lion Forge’s new double issue format, which debuts with Palle Schmidt’s Stiletto next month!