Set in a brilliant new sci-fi universe, Sharkey is a blue-collar bounty hunter who tracks criminals across the galaxy in his converted, rocket-powered ice-cream truck. Aided and abetted by his ten-year-old partner, he's out for the biggest bounty of his career. MINISERIES PREMIERE 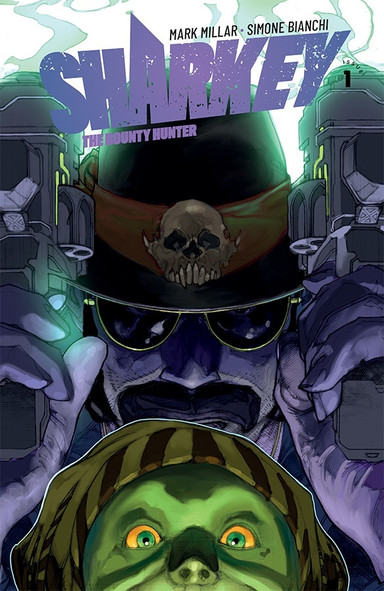 Nothing in 'Sharkey the Bounty Hunter' is anything you've haven't seen before. Mark Millar introduces us to a lovable scoundrel with a heart of gold. A cocky bounty hunter out to get make another big payday whose motivations seems pretty superficial and self-serving. Not a bad guy just an affable rogue with a sense of humor. The trick is it won't matter one bit that you've seen this character before because 'Sharkey' is as enjoyable and familiar as your mom's best dish. 'Sharkey' is comfort food you consume because it's filling and delicious despite having it many times before.

The plot is almost irrelevant because it sets him off to chase down a big score while reluctantly taking on a young passenger. It doesn't matter because you know it's going to be a good time. Millar does create his own universe of aliens and attractive semi-mechanical women in an appealing sci-fi future. It has the world-building of environs like 'Star Trek' and 'Star Wars.' The credit goes to Simone Bianchi, whose designs are gorgeous. The facial expressions especially convey a lot of thought and emotion. The only downside if there is a downside, the coloring is a little dark and harder to see the detail at times. It's a small quibble because so much of it is so good.

'Sharkey the Bounty Hunter' is another hit for Millar that is already headed to Netflix. Despite feeling familiar, the new series is a joy to read. It's an irresistible ride that you've seen before but can't give up especially as perfectly executed by Millar and Bianchi. 'Sharkey' is a winner and worth your time and money. Enjoy.