After weeks of talking to inmates, Dr. Quinzel’s work comes down to one patient—the Joker—in this gripping sneak peek at Wednesday’s Harleen #2. 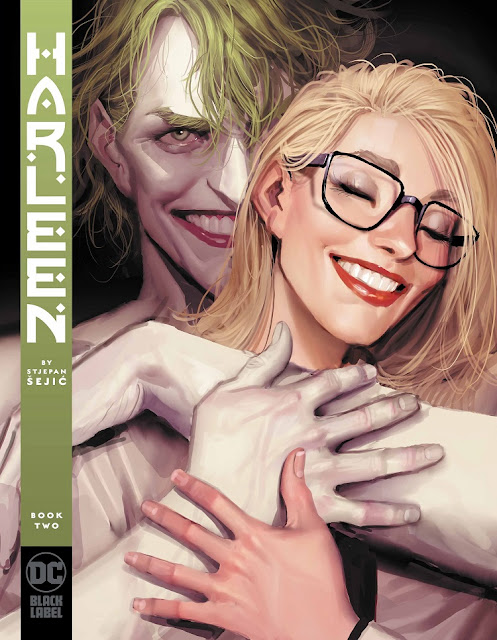 In the world of Stjepan Sejic’s Harleen, the stunning new miniseries from DC Black Label, Dr. Harleen Quinzel’s first meeting with the Joker wasn’t in the corridors of Arkham Asylum, but on the violent streets of Gotham, where the Clown Prince of Crime held her at gunpoint before unexpectedly choosing to let her go. This makes her one of the very few citizens to survive a run-in with Gotham’s most notorious psychopath, and understandably, it’s a moment that’s haunted the young psychiatrist ever since. Needless to say, the prospect of facing that frightening grin once again, even if it is behind the protective glass of Arkham, isn’t something Harleen is relishing. But with her life’s work on the line and little to validate her hypothesis since starting at Arkham, she has no choice but to face her fears and speak with her onetime assailant as Harleen #2 opens.

Sejic’s take on the beloved character has so far lived up to its title—this is a book that is far more interested in Harley Quinn’s life before her fall into villainy. It’s given us our most enticingly human look at the character yet—a well-meaning but flawed doctor who is sadly ripe for exploitation by one of Gotham’s most wicked minds. Or is there more to it than that? Could Harleen’s transformation be an act of empowerment rather than exploitation? Could embracing her biggest fear ultimately be what allows Harleen to overcome all the fears and uncertainties that have been holding her back throughout her life? Either way, it’s a fascinating ride as this exclusive preview of chapter 2 demonstrates.