Lara, still reeling from the conclusion of the last issue, falls into bad habits - drinking and avoiding what's happening around her. But there are forces in Creighton that won't rest until Lara faces her destiny, whether she wants to or not, leaving the journalist's professional life in disarray. 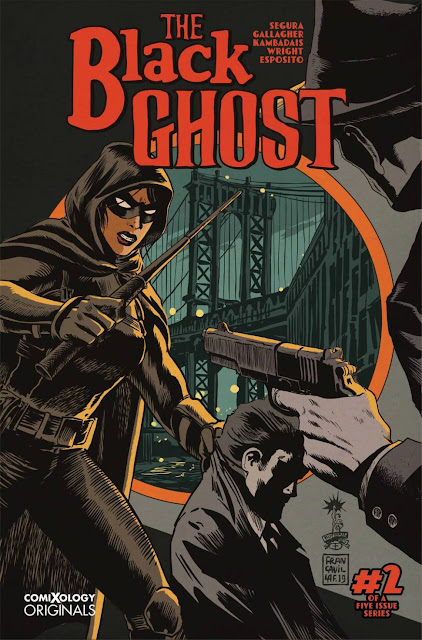 Part of the comiXology Originals line of exclusive digital content only available on comiXology and Kindle. This title is available as part of comiXology Unlimited, Kindle Unlimited, and Prime Reading.


'The Black Ghost' by Monica Gallagher, Alex Segura, George Kambadais, and Ellie Wright debuted a month ago and introduced a compelling protagonist in Lara Dominguez. She's a dogged reporter who's obsessed with the vigilante Black Ghost. Her obsession interferes with her job to the point of distraction. She dismisses her actual assignments to try and track down his movements with the help of a mysterious online source. At the end of the last issue, she witnesses the Black Ghost's final moments and takes on the gang she thinks is responsible for his demise. It leaves her reeling and spiraling into some self-destructive behavior.

Issue two is an interesting follow-up to the events of the first issue. In most cases, the main character would simply shake off the traumatic events of the night before and move on. However, under the pens of Gallagher and Segura, we get a more realistic hangover with a shaken Domiguez seeking solace and ultimately companionship in her favorite dive bar. It becomes more of a character study than a typical hero comic. While Segura's talent for mystery writing is evident as Dominguez chases down leads and brawls and provides an in-depth monologue, it's the very human side of her that exposes a lot of pain and questionable choices.

This issue is really about Lara and how she handles (or doesn't handle) her pain and confusion. Now, without the hero she worshiped there to protect and serve the city she doesn't know what to do. She turns to alcohol and sex absconding her responsibilities as a reporter jeopardizing her job and basically losing her way. Even an attempt by her online source to guide her in a new direction flusters her to walk away completely. Classic pulp noir gumshoes and reporters were famous for their hard-drinking, fighting, and resiliency. Lara fits that mold but her actions have consequences that only make her life worse, not better.  It's a complex image we get of Lara that puts into question how much we can depend on our narrator, our hero to do the right thing.

It's a fresh approach by the writers to challenge the reader about what makes a leading character likable, dependable, or even heroic.

George Kambadais and Ellie Wright again do a wonderful job on the art. In an issue where there isn't a lot of action, they combine to provide an eclectic design of panels and pages that move the story along while remaining inviting and visually distinct. Think of it as a brighter softer version of Michael Avon Oeming's work on 'Powers.'

'The Black Ghost' #2 changes everything for Lara. She goes down a dark self-destructive path only to be at a crossroads. Gallagher and Segura add some interesting character twists that change what you think is about to happen. Just when you think you know what's next they flip the script.  This is a riveting and unconventional character study in hero-making. 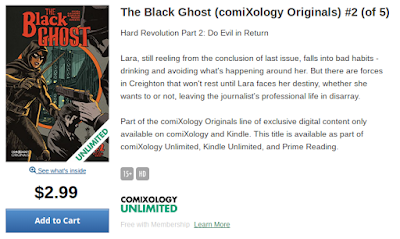