LET THE TEAM-UP BEGIN! In this issue: Vampirella takes a potion. Red Sonja gets hung upside-down by magic. A magical mystical mysterious gem begins to reveal its secrets. And many, many, SO many hamburgers are consumed. 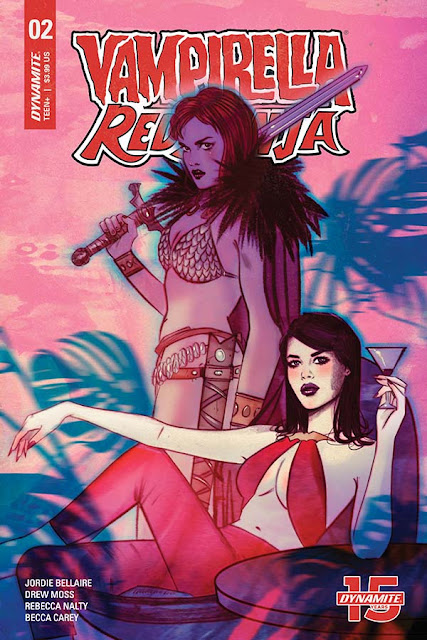 
Anytime a new Vampirella and/or Red Sonja series begins I know it's going to be a fun creative turn by creators that are allowed to put their own twist on these legendary characters. When combined, Vampirella with Red Sonja as co-stars it's an even bigger treat. Writer Jordie Bellaire and artists Drew Moss and Rebecca Nalty give us an intriguing and fun buddy action-adventure.

While investigating the murders of nine people in the mountains of Russia, Vampi finds a feral Red Sonja who's been mistaken for a Yeti by locals. The first issue was a great introduction of Vampirella as a visitor to Earth from the planet of Drakulon, who's only been assimilating for about a year. Bellaire portrays her as a smart and savvy investigator interviewing people and looking for clues for what's called the Dyatlov Pass Incident. What she finds instead is a grumpy and defensive Sonja.

In issue two the two women learn to get to know one another. With the help of an amusing occultist, Vampi learns that Sonja is cursed and far from her time and place. Their interaction is funny and revealing about each other. They're a sort of odd couple but works really well to distinguish their personalities but also their commonalities. Bellaire has formed a formidable duo that are irresistible and compelling. Sonja sitting on the bed after a shower eating a literal mountain of burgers is one of the comic book highlights of the year as far as I'm concerned.

Moss is an incredible talent who not only draws exceptionally well but also designs pages that jump out and grab attention. Creative panels and close-ups give the book a nice variety of things to look at that aren't your typical comic book fare. The expressions on the characters' faces convey so much that it helps emphasize Bellaire's writing. The pacing is measured but the details keep eyes glued to the page. Nalty's colors are bold and deep and serve as the perfect companion to the boldness of Moss' action. Vampi with her signature red suit and Sonja with her legendary red hair it's almost impossible not to have a vivid color scheme and it's executed perfectly.

Becca Carey is credited with letters that are fine but the font suddenly changes halfway through the book and I'm not sure why.

'Vampirella/Red Sonja' is such an enjoyable series featuring two legendary warrior women in a fun but intriguing adventure. Bellaire, Moss, and Nalty are at the top of their games in a flawlessly written and illustrated comic. Vampi and Sonja play off each other perfectly making them the ultimate super friends.