REVIEW: 'Going to the Chapel' #3 by David Pepose, Gavin Guidry, and Liz Kramer

Locked in a stalemate with the police, an unexpected loss sends Emily and the Bad Elvis Gang spiraling into chaos, but unfortunately, Emily's dysfunctional wedding party isn't going to take this lying down. Can this bride pull off one last escape, or will her worst secrets be unveiled? 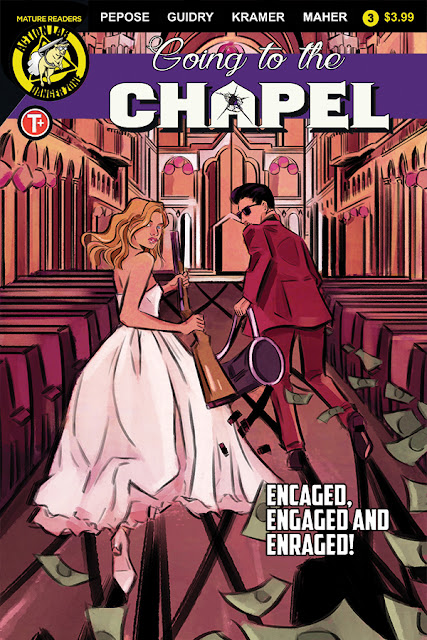 GOING TO THE CHAPEL #3

'Going to the Chapel' has been a blast so far. It's been a wild heist job gone wrong with romantic comedy chops. Issue three picks up where the last one left off. With the law breathing down their necks ready to send the SWAT team in, Tommy reveals explosives are wired to each entrance of the chapel. If that wasn't bad enough, Emily appears unsure of what she wants, her groom-to-be is still in the dark about her past with Tommy, and the hostages are getting restless. There's a lot to love about this particular chapter, but as a delicious donut, there's a giant hole in the story that's surrounded by so much sweet, sweet goodness.

There is some vital background about what really happened between Tommy and Emily and why it seemed he abandoned her.  It gives Tommy all the motivation for what he and his Bad Elvis Gang are doing holding up the wedding. Emily seems aghast at first then angry at Tommy's return. Her reluctance to marry her seemingly milquetoast beau, Jesse, prior to Tommy showing up leads to her joining the gang in trying to escape. Her willingness to join Tommy and leave her wedding behind opens up some problematic decisions regarding Jesse.

It's hard to discuss the character of Jesse without giving away too much of what happens in issue three, but he's never been fully fleshed out. It might be by design to keep the focus on former lovers Tommy and Emily. Jesse is just the collateral damage that she's fine leaving behind. Granted, she was never shown to be completely in love with Jesse, despite his amiable but nerdy demeanor, her actions and behavior toward Jesse as the result of the events in issue three are outright callous and just plain mean. Emily goes from a conflicted bride to a heartless villain. A villain may be too harsh a word but she's not the likable protagonist you hope rides off in the sunset with Tommy. It's hard to root for someone as cold-blooded and unsympathetic.

Her character flaws were the most glaring and detrimental to the issue but other elements worked. The guests fighting back was an inspired turn. Grandma with a gun was especially funny and in line with the type of dysfunctional family members in attendance. The entire sequence was full of funny bits and worth hanging with the series despite my criticisms above.

The art of Gavin Guidry and Liz Kramer continues to be top-notch. They capture all the chaos and various emotions of the characters with perfect timing and pacing. There are some action pieces that give the proper punch with the use of color and design. There's also some careful framing of a certain romantic scene that tip-toes the line of tastefulness. More importantly, it lands with the laugh they were looking for.

'Going to the Chapel' #3 hits a speed bump but keeps on going. It's still a crazy heist job gone wrong with laughs aplenty. It's the characterization of some characters that fall short while others take an unexpected, unwelcomed turn. Still, this is a fun action-comedy worth sticking around to the end just to see how it all unfolds.