END OF STORY ARC. Kick-Ass faces Rosa the assassin in this violent story arc climax. But is Patience too deep inside the criminal underworld to escape? 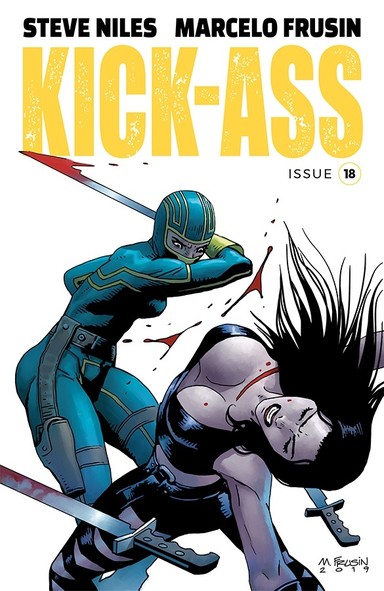 Vigilante stories are hard to keep fresh. Even as refreshing it is to have Patience Lee, a black military vet who turns to Robin Hood-style crime to support her family, the stories can become a little predictable. Steve Niles tries his best to add some drama and complex familial dynamics as Patience deals with being blackmailed by her brother-in-law. Between Russian mobs and Mexican cartels, the new Kick-Ass has her hands full in one blood-soaked finale.

It's never a matter of if Kick-Ass will conquer her latest foe, it's just a matter of how. In this case, the formidable assassin Rosa goes to toe-to-toe with her in an epic confrontation. The type of fight scene we've come to expect from the series. A brutal, drag-out, bone-crushing battle that ends only one way. It's one of the things - the extreme violence - that fans expect from a comic with the 'Kick-Ass' name on it. But is there any tension or any question of what the outcome will be? No, and that's why as much as I love certain aspects of the series it's the predictability that weakens the storytelling.

Don't get me wrong, the comic looks fantastic. Marcelo Frusin does incredible work throughout with special attention to the prolonged well-choreographed final showdown. The fighting is very fluid with big shots and some surprises are thrown in. Sunny Gho's colors set the right tone, dark, bold and serious.

'Kick-Ass' #18 concludes another bloody arc in grand fashion. Another threat contained, another bullet dodged by Patience.  Despite the series being formulaic at times, it's well-executed and illustrated. This issue is solid if not predictable but it does hint at a game-changing event on the horizon. The series is about to explode. Stay tuned.