Secrets fester in the Blaine family-and in their home. Chase uncovers a piece of history best left hidden, while Mackenzie explores the fraught past between her uncle and Reese. 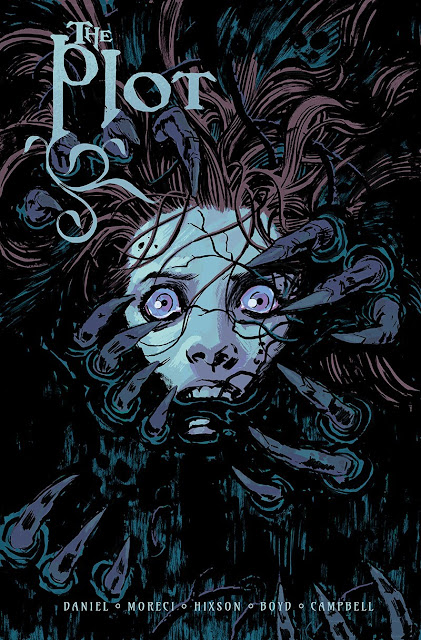 Things in Cape Augusta are simply getting creepier and creepier. With Blaine family members back in town, all their history is coming back with them. The theme of ghosts in the literal and figurative sense is on full display and weighs heavy in this second issue. No wonder the Sheriff is none too pleased with Chase and company taking up residence at their family home.

'The Plot' is first and foremost a family drama. The ghosts of the past come lurking in every conversation and interaction the characters have. It hovers overhead like a rain cloud. All the grudges, regrets, mistakes, resentments, etc are revisited and are the cause of tension between people like Reece and Chase. Imagine 'Ordinary People' or even 'Party of Five' for that matter mixed with 'Poltergeist' as directed by Guillermo Del Toro and you get the vibe of the series. It wears its allegory on its sleeve making no bones about what this story represents putting the supernatural aspects in the background for now.

Even with the ghosts as supporting characters, they are ever-present and thanks to Josh Hixson and Jordan Boyd, as menacing and frightening as can be. Cloaked in darkness with a living dead appearance, the ghosts in 'The Plot' look horrifying. Yet, except for one scene don't play a major role but that's certain to change as Chase and family settle in much to the chagrin of the locals. It might seem like a simple fundamental aspect of comic art but Hixson's sequencing of events, the series of panels within a scene to ratchet the tension is remarkable. The developing close-up of a character's face explodes into something shocking or as in the rescue scene a master class of high drama and suspense. You don't always need an obviously violent and bloody exchange to find the horror in a story. Sometimes, a thousand pinpricks can be more unnerving than one hatchet chop.

'The Plot' is the type of horror story that gets under your skin. It treats potential supernatural threats as part of the landscape, an ever-present presence that isn't an aberration or an interloper. Instead, it's the ghosts of the past that linger and ingrain themselves in our collective psyche only to manifest themselves as consequences for our choices. 'The Plot' is as much a psychological thriller as it is a ghost story. And it's top-tier storytelling that just keeps unraveling a darker mystery. Suffice to say, 'The Plot' is one of the best comics in any genre right now.