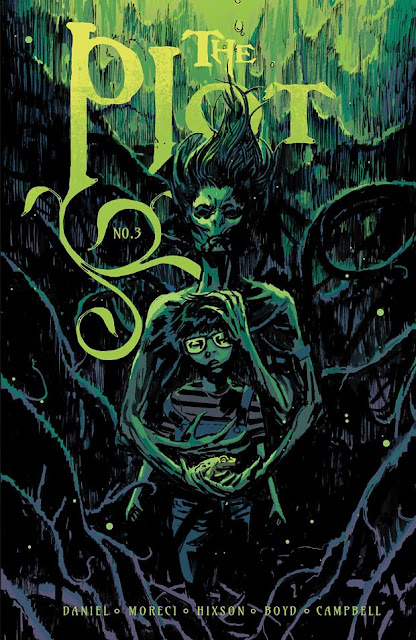 Another great issue of 'The Plot' is like a new episode of your favorite hour-long supernatural TV drama. Whether it's Penny Dreadful, Supernatural, Haunting of Hill House, or even the Vampire Diaries you want an engrossing unnerving time with characters you care about. 'The Plot' gives you all this and more.

Chase can't catch a break. Burdened with the Blaine legacy and left to care for his niece and nephew, he's having a hard time escaping trouble despite his good intentions. As if a haunted estate wasn't enough terror, Sheriff Sullivan wants nothing more than to run Chase out of Cape Augusta. Meanwhile, the tentacles of the evil begin to wrap themselves around other characters in some nerve-wracking scenes.

At this point in the series, there's a better familiarity with the characters. You can't help but feel for Chase. He's a bit of a loser trying to redeem himself but he can't escape his past and the past of his family. It's a giant weight on his shoulders he can't detach himself from. The kids haven't played into the story too much. They continue to play supporting roles but are starting to emerge on their own. Even the creepy visions and haunting figures we've seen are becoming recurring characters. Despite this, they haven't lost their shock value at all. Michael Moreci and Tim Daniel have found a singular voice, a cohesiveness that makes the storytelling seem seamless and impressive.

What keeps the tension and suspense alive is the work of Josh Hixson. He creates these intimate panels full of darkness emphasizing the character to the forefront in order to distract what comes out of the darkness. The sequencing of events is a slow burn of anxiety and dread until the image comes into full focus. The framing of scenes is also very cinematic by pulling back the camera to capture the setting but drawing closer and closer to the subject at hand revealing their fear or shock. Jordan Boyd adds some brilliant colors at times to contrast the heaviness of the surrounding darkness or to set the tone for an overall scene.

'The Plot' serves up another delicious chapter, perhaps its best entry so far. The series keeps getting better with every new issue.