How many lives must the lethal assassin Roku take in her first series? Killing her way around the globe, the deadly weapon called Roku will face a challenge she can't simply execute. Being bad has never been so fun. 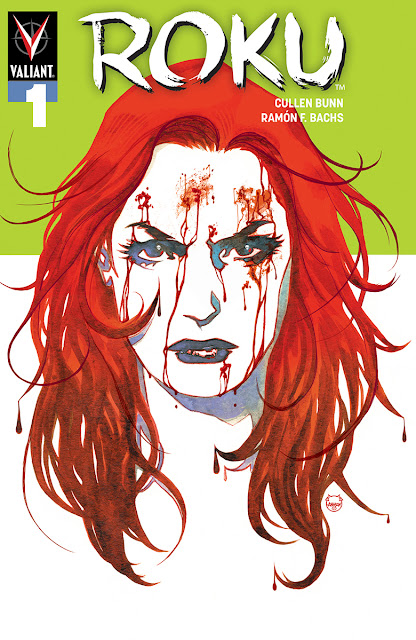 Described as the "deadliest woman in the world," Cullen Bunn's Roku spares no time in proving it within the first opening pages. She's not your run-of-the-mill assassin. Sure, she's a cold-blooded killer with a razor-sharp focus in eliminating what she calls monsters like her but that's just the beginning. The comparisons will be inevitable so let's get them out of the way. She's got red hair that has prehensile attributes like that of Marvel's Medusa, she's a feared assassin like Marvel's Black Widow, and has psionic suggestive powers like Marvel's Jean Grey. So yes, she's an amalgam of various awesome comic book characters wrapped into one. Throw in some Terminator-like determination and Jason Bourne identity issues and she's the deadliest woman in the Valiant universe hands down.

The debut issue is pretty straightforward and action-packed. She dispatches the bad guys with violent and efficient fervor. It's all beautifully choreographed by Ramon Bachs. The many fight scenes are perfectly paced and spaced out on the page to allow the full arsenal of Roku to be on display. Add in the bright bold colors from Stephane Paitreau, it's an ass-kicking cinematic feast for the eyes. In retrospect, the issue is technically flawless albeit a familiar assassin storyline. It doesn't matter when 'Roku' hits every beat on time with great enthusiasm. It won't matter you've read something like this before.

Look, there isn't much background on Roku. She's mostly a mystery with only hints at her true identity. It's enough to keep you intrigued while she impales the bad guys with her hair and battles a formidable foe. There's something about acquiring a weapon for her clients but whatever the premise you can't keep your eyes off of Roku.

'Roku' #1 debuts with guns (and hair) blazing. It's wall-to-wall action that will feel familiar but executed so well it won't matter that you've seen some version of this assassin tale. Cullen, Bachs, and Paitreau bring their A-game for this exciting new series that is pure adrenaline.