The future is Now! Tom Sniegoski's return to Vampirella continues as the Vengeance series battles into its third issue. 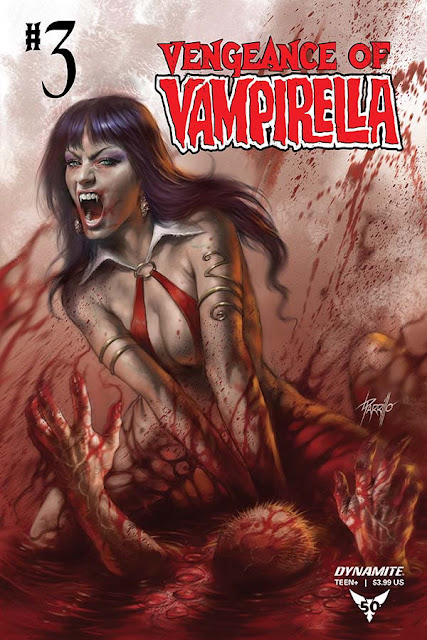 This issue Hemorrhage prepares to strike and is reunited with Mistress Nyx while Pendragon attempts to restore Vampirella to her former self! But, will the Daughter of Drakulon be strong enough - or willful enough - to face this new combined threat and restore order to a world gone dead!

Vampirella lives! As in she's finally making an appearance in her own series. I knew she'd be back to her old self so she could get the 'vengeance' in the title, up until now her presence was sorely missing. Now her transition back to the land of the living is complete through some convenient magic and has her up to speed. With her feral side subdued, Vampi's wit and attitude are back just in time to save the world (hopefully).

Pendragon explains to Vampi what she's up against and what the stakes are. Amusing but sobering is her reaction to the news considering she lost to Nyx before. That realization is a great way for Tom Sniegoski to temper readers' expectations but we're sure to see Vampi come out on top, right? With Vampi at full force and an eager Pendragon, it's not going to be an easy battle ahead but at least she's back on the page.

The series has really been about Mistress Nyx. She vanquished Vampi and took over the world for the last 25 years and reigns supreme. The dark dystopian world is her playground now without an adversary to compete with. And that's the problem. She's bored. She's gotten everything she ever wanted and now there's no challenge, no struggle, nothing to strive for. It's an interesting angle that tackles what would happen if a villain won. The complacency, the boredom, the lack of motivation when the victory settles in. The lack of balance between good and evil is pronounced and for every Batman there has to be a Joker. Nyx realizes she misses the struggle.

I don't think Michael Sta. Maria has ever drawn this much bloodshed or Omi Remalante, Jr., has had to color this much blood. But there's plenty of it and they knock it out of the park. Hemorrhage transforms the blood into sentient beings he uses as he wishes. His love for Vampi is evident and his longing for her is strong. Nyx is drawn sexy and playful per her personality but Sta. Maria really is most effective with her facial expressions. They convey so much and how lightly she takes the return of Vampi. Overall, the art is first-rate.

'Vengeance of Vampire' #3 with Vampi back at full strength sets up an impending battle with Nyx. The series feels like it's back on track now that Vampi is truly back from the dead. It's picking up steam and it won't be an easy confrontation even though Nyx welcomes it. This is the Vampi we know and love.