Humanity has raised their greatest hope from the dead, but will Pendragon and the rest of the survivors be able to control the beast that they have unleashed? 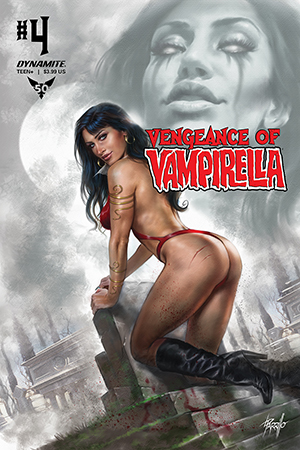 This issue: Vampirella and Pendragon united! Nyx faces tough questions about her handling of things from the Chaos Lords! Hemorrhage and Nyx lay a trap for Vampirella! And it's all heading to the fight between Hemorrhage and Vampirella you've been waiting for.

I've been having mixed feelings about this limited series since issue two. Vampi doesn't appear until issue three and this issue serves as the bridge to the finale in issue five. And while some of the interactions between Nyx, Hemorrhage and her overloads have been slightly interesting there hasn't been enough to hold interest until Vampi was resurrected, came out of her feral state and back to her bad-ass self.

Meanwhile, Nyx deals with her boredom without a true adversary since killing Vampi and dealing with corporate meetings with her bosses. Lost in all this are the people on the ground that live under Nyx's rule. We got a glimpse of them in issue one when they helped explain the state of affairs twenty-five years under Nyx's cruel reign. Since then, they haven't been heard from.

With this issue, it's more about Vampi plotting her next move as she anticipates a fierce battle against Nyx's forces and isn't sure she'll win out this time. Nyx also prepares her next move as she simultaneously searches for and sets traps for Vampi. The story is mostly in preparation for the next issue. It just feels the story is too short for a five-issue run. For Vampi fans, there just isn't enough of her to feel fully invested.

The art remains stellar. Michael Sta. Maria and Omi Remalante Jr. present bold designs with rich colors. They thrive on action but there isn't a lot of it in this issue. The next one should be a feast for the eyes.

'Vengeance of Vampirella' has been a little bit of a disappointment for die-hard Vampi fans. Unlike other minis, this one lacks a ton of the titular hero in action. However, this penultimate issue sets up what should be one bloody and exciting finale.