Molly and Dust go on a quest of Tolkien proportions while Billy and Fury try to avoid being roasted by emotional vampires! 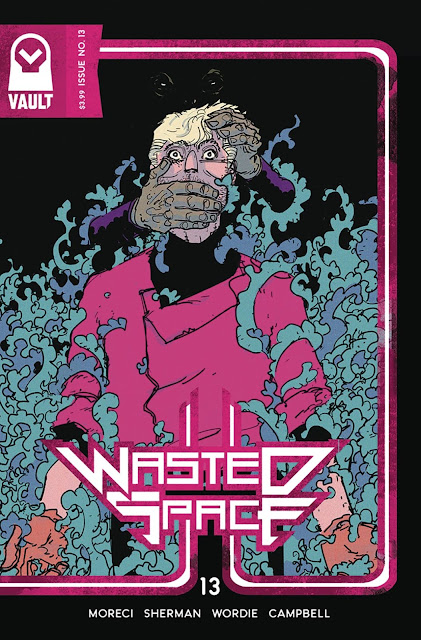 
'Wasted Space' has been one of the best comics going and one of the most consistently enthralling reads. I've said before that it's a mixture of Star Trek's intellect, Star Wars' adventure, and a sexy black comedy. It's as likely to break into a fierce battle as is it into a deep existential conversation, sometimes at the same time. Issue thirteen is just the latest example of big ideas and big action written by Michael Moreci.

With the team split into two, the story goes back and forth from Billy's and Fury's forced therapy sessions to the battlefield where Molly, Dust, and the others defend against an alien army. It's quite the balancing act for Moreci. On the one hand, you have the deep conversations between Billy and Fury about how we see ourselves, are resistant to change and how we see others amid these excruciating therapy sessions. On the other hand, Dust informs Molly he's there for her amidst the interlude with Billy while they're on the battlefield. I don't know how many writers could pull this off with such precision and depth all while delivering a bonkers battle sequence.

It's that kind of storytelling that is once engaging and thoughtful yet just as equally thrilling and eye-popping. Hayden Sherman and Jason Wordie provide amazing visuals. Sherman's innovative designs and panel structures infused with Wordie's vibrant colors create a vivid landscape you can't tear your eyes away from. It's a fun and exciting composition of color and action that delivers every issue.

'Wasted Space' takes The Real World's famous tagline "when people stop being polite and start getting real" to heart in this latest chapter. Brutal honesty and self-reflection mixed with war is a risky combination that Moreci and company pull off with flying colors. No other comic makes you think while blowing your socks off like 'Wasted Space' does.